The Friday Filibuster: To Vaccinate Or Not? 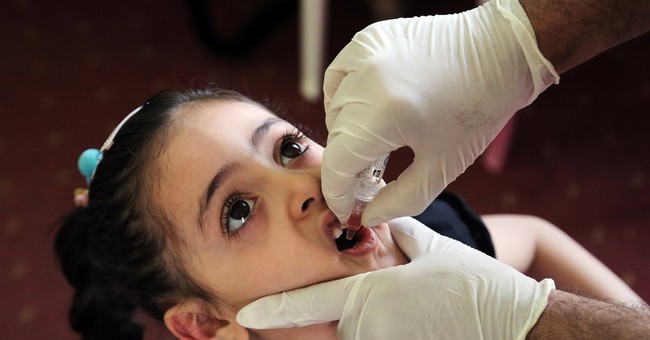 The Friday Filibuster: The one-stop-shop for everything you need to know about this week in politics.

15% of Iowans said Scott Walker would be their first choice for president, putting Walker in an early lead among potential GOP candidates.

21.2% of likely Republican voters in New Hampshire said they’d vote for Walker, another lead for the Wisconsin governor.

5.6% - The unemployment rate the administration is touting, but which Gallup points out is one big lie.

68% of Florida Republicans think Sen. Marco Rubio should run for re-election to the Senate.

77% of millennials can’t name one of their U.S. senators.

President Obama submitted his annual budget request on Monday, which shatters budget caps, calls for higher spending, raises taxes by more than $2 trillion, and fails to balance. GOP leadership roundly criticized Obama’s plan, even saying it “provided the American people a good laugh.” Needless to say, it was dead on arrival. Conn pointed out the five most important takeaways every conservative should know, and Katie reminded us that the majority of the president’s budget proposals over the years have been defeated across the aisle, often unanimously.

Rep. Renee Ellmers (R-NC) doubled down on her decision to help block a vote on the Pain Capable Unborn Child Protection Act earlier this month, a move which pro-life groups met with frustration. Ellmers wrote an op-ed in which she criticized pro-life groups for their ‘childish’ behavior. Rep. Alex Mooney (R-VA), however, assured these groups that legislators are still fighting for life, by introducing the ‘Life at Conception Act,’ which could help protect unborn children from the moment they’re conceived. Meanwhile, the pro-abortion organization EMILY’s List announced it will be honoring Hillary Clinton with their “We Are EMILY” award, smashing the notion that Clinton would be a ‘moderate’ candidate in 2016. For those who recognize and cherish the rights of the unborn, be sure to check out “The Drop Box,” a new pro-life documentary airing early next month.

New Jersey Gov. Chris Christie sparked controversy this week after saying that he feels parents should have a choice as to whether or not they vaccinate their children, adding that that’s a “balance the government has to decide.” But despite the criticism he received, Salem radio host Mike Gallagher suggested what he said is in fact the ‘ultimate conservative position.’ Guy pointed out the media’s double standard on the issue; they’re all over Christie but turned a blind eye to Obama’s comments. Then again, the rules are always different for Democrats. Meanwhile, over at the White House, Josh Earnest declined to endorse a vaccination mandate—nine times in fact.

Each day the Islamic State’s barbarism reaches new levels. This week horrific footage was released of a captured Jordanian pilot being burned alive in a cage. Jordan’s responded swiftly to the murder of one of their fighter pilots, whom ISIS said they’d spare if one of their own, a would-be suicide bomber, were released. Clearly, that didn’t happen and Jordan executed the woman at dawn the following day. But the country wasn’t done retaliating. King Abdullah ibn al-Hussein promised Jordan would go after the jihadists until it ran out of fuel and bullets. As for what the U.S. can do to stop ISIS? Not much, according to former CIA Deputy Director Michael Morell. That is, unless we send in 100,000 ground troops. Speaking of eradicating terrorists, releasing more GITMO detainees is really not going to help matters, as many end up returning to battle upon release (including one of the ‘Taliban Five’) and there’s “very little” we can do about that. The president’s nominee for secretary of Defense did say, however, that he’d stand firm against White House pressure to increase the pace of transfers from GITMO. He also said he’d reconsider the administration’s Afghanistan withdrawal plan if needed. And White House Press Secretary Josh Earnest said we can expect to see legislative language “authorizing” Obama’s war in Iraq “relatively soon.” On a final note, President Obama actually drew comparisons between Americans “who committed terrible deeds in the name of Christ” and the Islamic State. At the National Prayer Breakfast of all places.

The House voted to repeal Obamacare in its entirety on Tuesday, a law that even the White House doesn’t fully understand apparently. Josh Earnest claimed reports that millions of Americans would be getting a tax bill thanks to the law were “inaccurate,” when in fact 6 million Americans will be paying roughly $2 billion in tax penalties.

NBC's Brian Williams On The Hot Seat After years of being the guy doing the grilling when it came to interview subjects, NBC's Brian Williams is suddenly on the hot seat after a story he'd been telling for years about his time as a reporter during the 2003 invation of Iraq turned out to be false. As Matt Vespa reported, Williams may also have lied again in his apology. It later came out that NBC had been telling Williams for years to stop lying about it. He didn't stop until he was actually called out by a veteran. The entire episode has turned into an "unmitigated disaster" for Brian Williams.

Senate Democrats on Wednesday mounted a filibuster against House-passed legislation to fully fund all of the Department of Homeland Security except Obama’s executive actions on immigration. Because of their ‘erstwhile rhetoric and rules,’ Guy explains that the filibuster clearly exposes Senate Democrats as extremists, obstructionists, hostage-takers, and pro-shutdown fanatics. Just a taste of their own medicine.

Israeli Prime Minister Benjamin Netanyahu’s speech to a joint session of Congress is coming up and it’s causing quite a stir. Joe Biden is still undecided on whether or not he’ll attend and dozens of House Democrats are threatening to boycott the address. We could probably use Pope Francis on the Hill a little sooner than September.

In other congressional news, Republicans don’t believe in governance. Or science. Or Barack Obama. OK, House Minority Leader Nancy Pelosi got at least one of those right. House Majority Leader Kevin McCarthy announced a renewed push to get the Senate-passed Keystone Pipeline bill to the president’s desk next week. Of course, President Obama has already said he’d veto the bill, which the Saudis are pleased with, seeing that they’ve pledged to “drown” American energy producers. Far-left eco-fascist groups are also happy because they have a new friend.

In Christine Rousselle’s feature, Smashing the Stereotypes: Alliance of “Nontraditional” Pro-Lifers Launches at March for Life, you’ll learn about the surprising diversity behind the fight for life. Yes, this includes two girls with teal hair and a whole army of feminists.

Also, be sure to watch Matt Vespa in his vlog (video/blog) as he explains why the Asian-American vote is up for grabs in 2016:

Last, but not least, we caught up with some of the potential 2016 candidates at the Iowa Freedom Summit to ask: “which issue Republicans should discuss more?” You can hear their responses here.

It was revealed that the Department of Justice wanted to scan the license plates of gun show attendees. The policy was never implemented. For those wanting to protect and expand our Second Amendment rights, Texas might be reconsidering its 125-year ban on the open carrying of handguns; the Second Amendment Foundation has filed a lawsuit against D.C.’s insanely restrictive concealed carry law; and Colorado State Rep. Patrick Neville–a survivor of the Columbine shooting–introduced a bill in the state legislature to get rid of gun-free school zones in the Centennial State. All of this on the back of another shoddy study from gun control proponents. Lastly, American Sniper, the film about the late US Navy SEAL Chris Kyle, keeps breaking records at the box office. Kyle, known as the most lethal sniper in American military history, wrote two books before he was murdered on February 2, 2013; “American Sniper” and “American Gun”, which details the history of firearms.

Brian Williams On the Hot Seat

After years of being the guy doing the grilling when it came to interview subjects, NBC's Brian Williams is suddenly on the hot seat after a story he'd been telling for years about his time as a reporter during the 2003 invation of Iraq turned out to be false. As Matt Vespa reported, Williams may also have lied again in his apology. It later came out that NBC had been telling Williams for years to stop lying about it. He didn't stop until he was actually called out by a veteran. The entire episode has turned into an "unmitigated disaster" for Brian Williams.