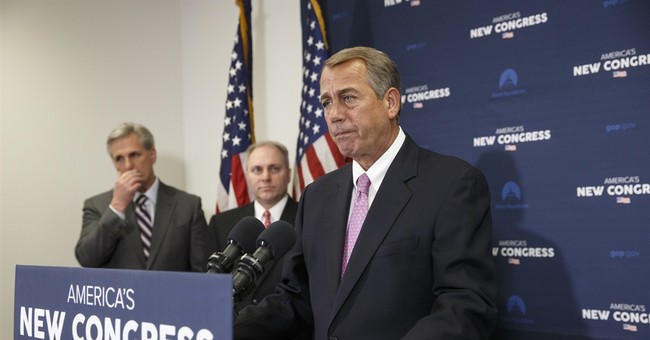 The president’s 2016 budget is unserious and "dead on arrival." Even The New York Times described it as “more utopian” than practical -- a sentiment, as it happens, House Republicans share.

“The president provided the American people a good laugh yesterday,” House Speaker John Boehner (R-OH) asserted this morning at a press conference. “He sent up his budget: more taxes, more spending, bigger government here in Washington. The same old policies that have failed for the last six years. That’s not what the American people want.”

“His new budget will give the federal government an 11 percent raise by taking more out of the economy in taxes,” House Majority Leader Kevin McCarthy (R-CA) added. “This new American Congress believes in growing America’s economy, not growing Washington."

House Majority Whip Steve Scalise (R-LA) argued that House Republicans' vision for the future is more aligned with the interests of the middle class. This is why, he affirmed, his conference is introducing bill after bill to cut back regulations and lower taxes on small businesses.

“You contrast that with the president’s budget that came out yesterday, ironically on Groundhog Day, where it seems like he wants to continue [doing] the same things that [have] failed.” he said. “He wants trillions in new taxes and more and more of these regulations and spending in Washington that are going to hurt jobs back home.”

“Yesterday the president sent up his budget and with that he was touting it as 'practical,' not 'partisan,'” she said. “Now just think about that for a second: It never balances, it raises taxes on hardworking families all across this country, [and] for small businesses, it means they will pay close to $11,000 per employee just to comply with regulations.”

“We’re here to empower people, not the government,” she added. “So let’s work together to make that happen."