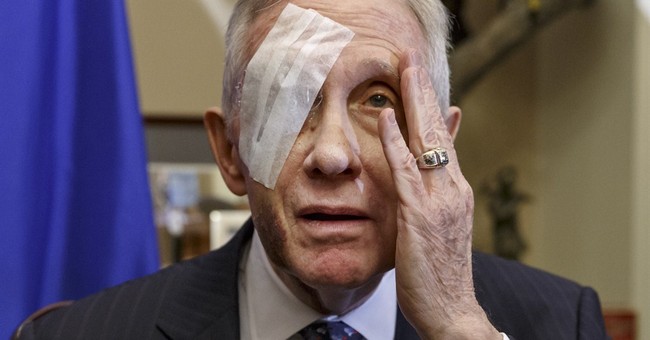 Yes, that strident headline is deliberate trolling, but it serves to illustrate a point about rhetoric and shifting standards. When they held the Senate majority, Democrats regularly attacked Republicans as reflexive obstructionists whose over-reliance on the filibuster (provoked by Harry Reid's historic abuse of power) left them no choice but to limit that minority parliamentary tool.  They frequently framed GOP positions as "extreme," regardless of whether the label remotely applied.  They selectively enforced their "civility" fixation, affording themselves the flexibility to denounce Republicans as "hostage-takers" over budget disputes.  And they hungrily heaped blame upon House Republicans for shutting down the government. Yesterday, Senate Democrats -- now in the minority -- mounted a filibuster against House-passed legislation to fully fund the Department of Homeland Security, with the exception of funding for two of President Obama's executive actions on immigration.  DHS funding expires this month, as designed by Republicans' so-called CRomnibus spending bill passed late last year.  Based on Senate Democrats' erstwhile rhetoric and rules, yesterday's episode helpfully exposes Senate Democrats as:

(1) Extremists: A recent Washington Post poll showed that a sizable majority of Americans agree that Republicans should "take away federal funding" to block the implantation of Obama's unpopular executive amnesty.  Senate Democrats are ignoring the will of the American people in order to protect a presidential action that under-cuts the Constitutional balance of powers.

(2) Obstructionists: Mitch McConnell's majority, duly elected by the American people, favor this legislation -- even if they'd like to offer some tweaks and alterations. Harry Reid's crew is blocking that process from even beginning. Reid's militant opposition to allowing the US Senate to vote on things, as both the majority and minority leader, is officially legendary.

(3) Hostage-Takers: Senate Democrats are willing to threaten national security funding (as they so often put it) in order to shield Obama's illegal fiat that halts deportations and issue work permits to millions of illegal immigrants. House Republicans have passed a bill that extend all DHS appropriations, with this very narrow and appropriate exception.  Senate Republicans would like to debate and vote on that bill.  Democrats won't allow discussion, let alone, amendments, out of slavish fealty to a president whose agenda was just roundly rejected by voters.  Why are Senate Democrats endangering American children's lives?

(4) Pro-Shutdown Fanatics: As a result of Senate Democrats' nihilistic hostage-taking, they are effectively endorsing a government shutdown, subordinating citizens' safety to their reckless ideology.  And because Senate Democrats unanimously backed this obstructionist filibuster, it's clear that they're now taking their marching orders from a small fringe of their minority party.  They're all Ted Cruz.


For the record, I think the House-passed bill errs in defunding Obama's 2012 DREAM Act-style fiat, or DACA. It's true that the president also used to argue that he lacked the authority to impose that policy, but opposing the more egregious affront of his follow-on, sweeping amnesty last year should be the focus of Congress' push-back.  That's what the amendment process is for -- and the Senate would almost certainly consider, and likely adopt, such a change.  If Democrats weren't preventing any debate from taking place via filibuster, that is.  By the way, I fielded this question on Twitter:

Why is a budget bill subject to 60 vote limit? @guypbenson @jeffzeleny @RBPundit


In short, isn't filibustering a budget bill not allowed under the rules?  A Senate source explains the relevant distinction (emphasis mine): "This is an appropriations bill, and people will often shorthand that to “budget.” But an actual budget resolution, setting the budget, cannot be filibustered and is not signed by the president. So they can filibuster this because it’s an [appropriations] bill, not a budget resolution."  I'll leave you with a useful reminder from veteran Beltway journo David Drucker:


Every single Senate Democrat joined Harry Reid's filibuster, the sole purpose of which is to enshrine Obama's unlawful power grab.  Even the ones who allegedly "oppose" it.  This is why voters were fully justified in showing so many "independent" Senate Democrats the door in November. When push comes to shove, Democrats support the Obstructionist-in-Chief:

One every-other-day of the new Congress from POTUS who demands "a better politics." MT @markknoller: Make that 13 veto threats.