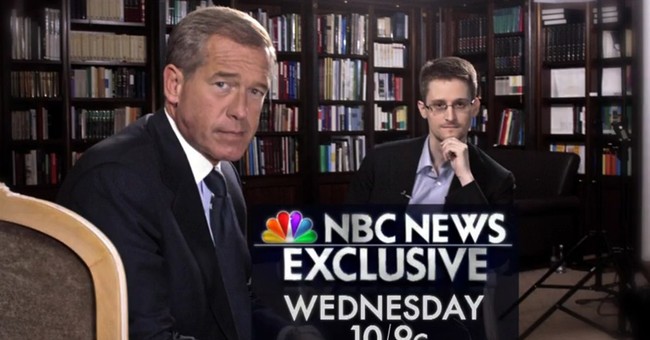 Brian Williams told a whopper–and he’s paying for it. Last night, the anchor on the most watched evening news program admitted that his 2003 Iraq War story, where he alleged that he was onboard a Chinook helicopter that was forced down by a RPG, was false. He lied–and it seems his apology wasn’t all that forthcoming either. Again, more details will come as Chinook-gate drags on in the media circles.

Guy wrote yesterday about whether Mr. Williams will lose his job. Sadly, Williams probably won’t be fired since he’s too much of a cash cow for the network:

I'm asking the question. And I'm answering it: No, he won't lose his job. NBC News is far too invested in Williams to bump him off over this years-long fabrication, and certain media figures seem to be bulletproof, regardless of their infraction. The network had their anchor apologize on air last night, but as others have noted, he still isn't coming fully clean.

Guy added an update featuring a helicopter pilot that has come forward to add more clarity on the situation, saying that Williams is guilty of peddling falsehoods. But so are those who are bashing him:

UPDATE - Hmm, this CNN story quotes the pilot of Williams' helicopter, who tells a story that hews more closely to the anchor's -- but still features key differences. Like, for example, they were never hit with an RPG. Another solider aboard the chopper said they never took enemy fire. The CNN piece does indicate that Williams' aircraft landed close to an hour after the other ones were forced down, but may have been part of that initial convoy earlier in the flight.

More salt is poured into this embarrassing journalistic wound with revelations that senior NBC News executives reportedly told Williams to shut it regarding his fictitious war story; a story that ironically started out as being accurate in their news reports (via Variety) [emphasis mine]:

Williams’ version of the story has never been allowed in NBC News programs, according to three people familiar with the unit. Indeed, in a March, 2003, episode of “Dateline,” Williams described the helicopter trip accurately. “On the ground, we learned the Chinook ahead of us was almost blown out of the sky,” he said while narrating a report.

The way in which the story has transformed under his telling may prove unacceptable to a news audience, suggested Doug Spero, an associate professor of communication at Meredith College in Raleigh, N.C., who has worked at various New York TV-news outlets. “A memory loss is OK. If it is a minor detail about something in a story, but when you are personally involved in an incident there is no room for compromise. I have always said, ‘I believe you until I can’t believe you any more.’ This may be that case. All we have is our credibility. Once you lose that, your general worth has been lowered.”

Additionally, war correspondents from other media outlets have been livid over Williams’ admission. Dan Lamoth at the Washington Post cited David Kenner, Foreign Policy magazine’s Middle East magazine editor based in Lebanon, aptly noting that you don’t “misremember” having your helicopter shot down. Moreover, how this whole fiasco went down will have Williams being discussed in journalism classes for years to come, although it won’t be for his top-notch reporting:

The reaction is in part a result of the nature of the scandal. Covering combat in person is a significant — and potentially life-changing — event. At least 61 journalists were killed in 2014 doing their jobs, according to the Committee to Protect Journalists. Twenty-three of them died while covering combat in 2014, compared with 26 in 2012 and 25 in 2013, the committee said. And that’s to say nothing of situations such as the executions of James Foley, Steven Sotloff and other journalists at the hands of militant groups like the Islamic State.

As someone who has spent several months in southern Afghanistan covering the U.S. infantry, walking foot patrols and occasionally coming under fire, I cringed when I saw the story about Williams. Virtually anytime a journalist is invited to speak before a group of U.S. troops or veterans, we are asked where we get our stories, and how we verify our information. Building trust is a significant challenge, especially in a unit that is working with an unknown embedded journalist in a dangerous place.

Williams, an internationally known journalist with enough celebrity to spawn mashup videos, now says that he “misremembered” what happened. That does nothing to help the problem. His actions will be added to a long list of incidents that the troops bring up when talking about military journalism, from Fox News Channel’s Geraldo Rivera being kicked out of Iraq in 2003 for revealing future troop movements to Dan Rather resigning as a CBS News anchor in 2004 after admitting that he had used unverified documents in a story questioning President George W. Bush’s military service.

Then again, sometimes people are rewarded for being dishonest about stories relating to the military. Just look at this 2010 New York Times article about then-Connecticut Attorney General Richard Blumenthal, who was running for the U.S. Senate at the time (h/t Sean Davis).

The title reads: “Candidate’s Words on Vietnam Service Differ From History.” Is that a fancy way of saying he lied?

At a ceremony honoring veterans and senior citizens who sent presents to soldiers overseas, Attorney General Richard Blumenthal of Connecticut rose and spoke of an earlier time in his life.

“We have learned something important since the days that I served in Vietnam,” Mr. Blumenthal said to the group gathered in Norwalk in March 2008. “And you exemplify it. Whatever we think about the war, whatever we call it — Afghanistan or Iraq — we owe our military men and women unconditional support.”

There was one problem: Mr. Blumenthal, a Democrat now running for the United States Senate, never served in Vietnam. He obtained at least five military deferments from 1965 to 1970 and took repeated steps that enabled him to avoid going to war, according to records.

Blumenthal went on to defeat his Republican opponent, Linda McMahon.

UPDATE: Allahpundit wrote over at Hot Air that Williams thought he was going to die when the RGP hit the helicopter he wasn't on in an interview with Alec Baldwin two years ago. But, have no fear; he only "briefly" thought that...in his imagination.

Update II: Hot Air's Ed Morrissey cites WaPo’s Erik Wemple, who asks why it took the helicopter crew to sound the alarm on chopper-gate? Moreover, what about the news team that was with Williams on the night of the incident?

A production crew accompanied Williams on the helicopter outing. The Erik Wemple Blog has asked NBC News who and how many people were on that crew. But where have they been as Williams has gone about misremembering the episode in media appearances in recent years? Upon the 10th anniversary of the incident, the anchor visited David Letterman and couldn’t have been more unequivocal about having ridden in the ‘copter under attack: “Two of the four helicopters were hit, by ground fire, including the one I was in, RPG and AK-47,” Williams told the “Late Show” host.

Again: Where were Williams’s crew members, who surely knew that Williams had either “conflated” his Chinook with another Chinook — his explanation — or was using the passage of time to embellish his own exploits — another explanation. And what of other NBC News employees who worked on the story? Why did they remain silent on these matters? Are they still with NBC News?

We put these questions to NBC News and haven’t heard back.

By all logic, NBC News would like to rest on Williams’s apology, ride out the media storm and, eventually, move ahead with things. Yet the fact that personnel aside from Williams knew that his statements on these events were erroneous should prompt an internal probe as to how these falsehoods circulated so freely.

"These revelations limit but by no means eliminate the credibility problems faced by Williams stemming from his mis-telling of the episode in recent years," he wrote.