9 Times The White House Declined To Endorse A Vaccination Mandate 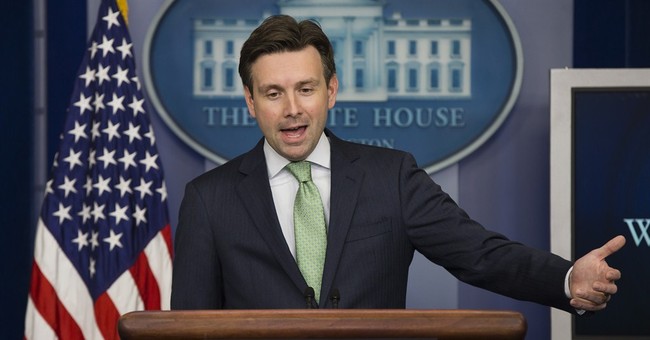 1. Because of that risk to the vulnerable population, does he believe that it's time to revisit state laws that allow some parents to opt out?

MR. EARNEST: Well, I know that there has been substantial litigation around this, too. I think in the mind of the President -- I did have the opportunity to visit with him shortly before the briefing on this very issue -- the President believes it shouldn’t require a law for people to exercise common sense and do the right thing. And again, this is the right thing for them to do both by their own children, but by also other children in the community. They have a responsibility to do this.

So there is an element of common sense that needs to be applied here because the science and the expert guidance that we get from our public health professionals is crystal-clear.

2. Does the President think this should be federally mandated, vaccines across the country for this set and other sets of childhood diseases?

MR. EARNEST: Well, Major, we do have a tradition and there’s a long track record in this country of these kinds of health issues being administered by state and local officials. This is something that we went through at the end of last year related to Ebola, that the monitoring that was in place was something that was strongly recommended by federal public health officials at the CDC, but ultimately, we are relying on state and local partners to carry out that monitor.

3. The federal government does not need to establish a mandate for vaccines, just recommendations and advice to states and parents on the facts?

MR. EARNEST: I think what the President is saying is we shouldn’t have to, that the science is clear. And it is irresponsible for people to not get their children vaccinated -- not only because it puts their children at risk of getting the measles, it also puts at risk other children in their community, if it’s infants who are too young to get the vaccine, or children who have compromised immune systems that they can't get the vaccine. So people need to take responsibility -- not just for their kids, but for the kids in their community.

4. Back to this question of vaccinations. I understand the President’s position is clear, everybody should get vaccinated. It’s common sense. But there are -- is a significant percentage of families that are not getting their kids vaccinated, and an increasing percentage. So the question, which I’d like to follow up Major’s very direct question, see if I can get a direct answer, is does the President believe that it should be mandated by law, whether state or federal? Does the President believe it should be mandated by law that parents get their children vaccinated?

MR. EARNEST: Well, I have not in the couple hours we’ve been discussing this here this morning had the opportunity -- when I say discussing it this morning, I mean discussing it among our staff, not in this context. But when we’ve been discussing it, we haven’t had an opportunity to sort of -- I at least haven’t had the opportunity to review all of the built-up case law over this. Again, I think that there are people on both sides of this issue who have filed lawsuits and suggested that -- made arguments to the court that the federal government does have this authority. Some have made arguments that the federal government doesn’t.

I think in the mind of the President, this is something that’s pretty simple. And the truth is -- this also goes to Nedra’s original question -- this shouldn’t be about politics. This is something very basic and fundamental about science and about the need for American citizens to act responsibly to protect their own kids, but also to protect the kids in their community.

5. But what has brought this up in a political context is you’ve had a couple of prominent Republicans who have said that, yes, everybody should be vaccinated against measles but parents should have a choice. So the question is that second part. Because in the first part they agree entirely with the President. Should parents have a choice, or should they be forced because of a larger public health interest to have their kids vaccinated?

MR. EARNEST: I think in the mind of the President, this shouldn’t be a difficult choice. The science is really clear about what we need to do to protect our kids and to protect kids all across the country. And, again, this isn’t about politics. This is about common sense, and the President believes strongly that parents should exercise that common sense in a way that ensures that their children get vaccinated on time so that we can make sure that kids across the country -- particularly those kids that are still under the age of 12 months and they can’t get vaccinated for the measles, there are some kids who are undergoing cancer treatments that prevent them from being able to get vaccines -- the thought that a child who is already suffering from cancer and is fighting cancer and therefore can’t get the measles vaccine would contract measles because of the irresponsibility of another child’s parent is unthinkable. And I would hope that we would have enough sense all across the country that we would take politics out of this and we would focus on the science to do right by our kids.

6. If I could just get some clarity on what you were talking about earlier -- I apologize if you already made it clear -- but as far as Chris Christie, Rand Paul were saying that they’re for these measles shots, they question the mandate. You haven’t made totally clear whether you support a mandate. So where does the President -- specifically, where does he differ from Governor Christie and Senator Paul?

MR. EARNEST: And I’ll leave it to those two gentlemen to articulate their own position. It's the President’s position here that we shouldn’t need a federal law; people should just use common sense.

7. So the President doesn’t support a mandate?

MR. EARNEST: Well, I think I’ve been as clear as I possibly can be on all this.

8. Let me just follow up really quickly on the ACA. If it's not about politics, it's about common sense, then does common sense dictate that, especially given the outbreak of measles, that children who have not been vaccinated should not go to school?

MR. EARNEST: Well, I know that there are a variety of state laws all across the country in which some states do mandate that, that children are required to get the measles vaccine before they’re allowed to attend school. So, again, this is a state and local issue. In the mind of the President and certainly in the mind of the scientific experts in the federal government, every child should get the measles vaccine.

9. And one more quick one on the vaccines. I know a lot of people have taken a crack at this, but you had a conversation, you said, with the President just before the briefing. If the President could give -- and obviously we’re speaking to you today, he’s had a few chances -- but since we’re not asking the President questions right now on this today, what would be the President’s direct message to parents who are considering not vaccinating their children or who have not vaccinated their children? As Jon mentioned earlier, that’s an increasing number every year.

The White House press corps was clearly disappointed that the White House did not want to politicize the vaccination issue. One reporter even asked why the White House was not attacking Republicans harder on the issue. Earnest responded:

Well, I do think that -- I think there are a variety of reasons why I’m reluctant to go in the direction that you are suggesting that I should go. (Laughter.) But I think the most important one is I would not want anyone who is watching this briefing or reading the transcript or, more likely, reading the coverage of our conversation to come away with the impression that there is somehow a Democratic and Republican divide about the wisdom of getting your kids vaccinated for the measles. There is not. The science is clear and it is common sense.

And it is up to people across this country to do the right and responsible thing by their kids and by the kids in their community, and that’s to get their kids vaccinated for the measles on time.

It is rare for the Obama White House to pass an opportunity to score cheap political points, especially when liberal institutions like The New York Times are just dying for them to do so. So Obama should be commended here for putting public health above politics.