Rudolph W. Giuliani was born in 1944 to a working class family in Brooklyn, New York. As the grandson of Italian immigrants, Rudy was taught the value of a strong work ethic and a deep respect for America's ideal of equal opportunity. He attended Bishop Loughlin Memorial High School, Manhattan College, and New York University Law School.

After joining the office of the United States Attorney for the Southern District of New York, Rudy rose quickly through the ranks, becoming the Chief of the Narcotics Unit at age 29. In 1975, Rudy was recruited to work in Washington, D.C., and was appointed Associate Deputy Attorney General and chief of staff to the Deputy Attorney General. In 1977, Rudy returned to New York to the private practice of law.

After the inauguration of Ronald Reagan in 1981, Rudy was named Associate Attorney General, the third highest position in the Department of Justice. He supervised all of the US attorney offices' law enforcement agencies.

In 1983, Rudy became United States Attorney for the Southern District of New York, where he spearheaded successful efforts against organized crime, white collar criminals, drug dealers and corrupt elected officials. Some of his best known cases include the groundbreaking mafia prosecutions in the "Pizza Connection" and "The Commission" cases, Wall Street corruption cases, and the convictions of corrupt political figures. Few U.S. Attorneys in history can match his record.

In 1993, Rudy became the first Republican elected Mayor of the City of New York in a generation. Campaigning on the slogan "One City, One Standard," he focused on reducing crime, reforming welfare and improving the quality of life. In 1997, he was re-elected with 57% in a city in which Democrats outnumbered Republicans five to one.

Under Mayor Giuliani's leadership, overall crime was cut by 56%, murder was cut by 66%, and New York City - once considered the crime capital of the country - became the safest large city in America according to the FBI. New York City's law enforcement strategy has become a model for other cities around the world, particularly the CompStat program, which won the 1996 Innovations in Government Award from the Kennedy School of Government at Harvard University.

When Mayor Giuliani took office, one of every seven New Yorkers was on welfare. Mayor Giuliani implemented the largest and most successful welfare-to-work initiative in the country, turning welfare offices into Job Centers, leading to the reduction of welfare rolls by 640,000, or nearly 60%, to the lowest level since 1966.

Mayor Giuliani also took decisive steps to restore fiscal responsibility to New York City, reducing or eliminating 23 city taxes while turning an inherited $2.3 billion budget deficit into a multi-billion dollar surplus. These reforms helped lead New York City to an era of broad-based growth, with approximately 423,000 new private sector jobs created in eight years, as business returned to the center of city life. As news of the New York renaissance spread around the nation and the world, tourism grew to record levels. Under Rudy Giuliani's leadership, New York City became the best-known example of the resurgence of urban America.

On September 11th, 2001, America suffered the worst attack in its history. After surviving the fall of the Towers, Mayor Giuliani immediately began leading the recovery of his city as it faced its darkest hour. For his efforts, former first lady Nancy Reagan presented Mayor Giuliani with the Ronald Reagan Presidential Freedom Award, he was knighted by the Queen of England, and named Person of the Year by Time magazine. In 2002, he wrote and published a number one best-seller, Leadership, which has sold over 1 million copies worldwide.

Limited by New York City law to two terms as mayor, Rudy founded Giuliani Partners in January, 2002, quickly establishing the consulting firm as a leader in the fields of emergency preparedness, public safety, crisis management, energy and health care. In 2005, Rudy became a name partner in the law firm of Bracewell & Giuliani. The sixty year old firm, previously known as Bracewell Patterson, has over 400 attorneys practicing in nine offices around the world. 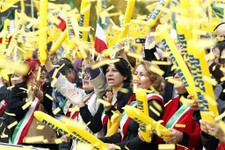 Tehran Recognizes Iran Opposition as the Alternative; So Should We
October 28, 2018 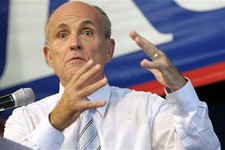 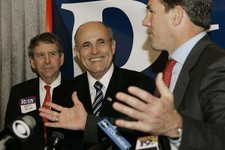