Tehran Recognizes Iran Opposition as the Alternative; So Should We

Rudy Giuliani
|
Posted: Oct 28, 2018 12:01 AM
Share   Tweet
The opinions expressed by columnists are their own and do not necessarily represent the views of Townhall.com. 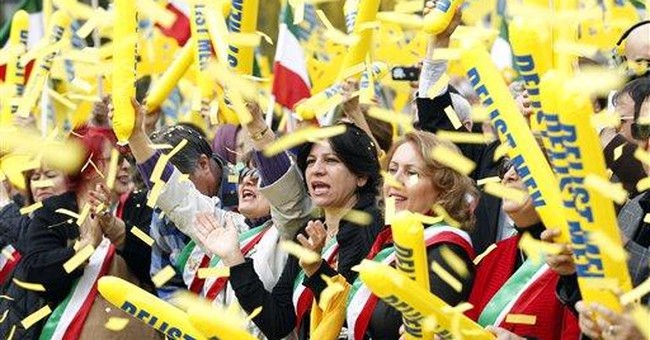 The American Iranian diaspora that stands against the regime in Iran last month came to New York, my city, as the international community does during the annual United Nations General Assembly meetings. For the ninth time, I had the honor of addressing them.

We have an obligation to listen to what the Iranian people have been saying over the past nine months in their continuous nationwide protests. I am one of a large bipartisan group of former governors, mayors, military leaders, senior administration officials and members of Congress, who agree on one critical foreign policy, as the Iranian people do: Iran is entitled to freedom and democracy, and should be led by those who have fought for it and with whom America can find its best allies.

We strongly support the largest and most organized Iranian opposition, known as the Mujahedin e-Khalq (MEK). It is very important to realize that fundamental change in Iran requires organization, leadership, a platform, endurance, competence, and sacrifice, and the one group that the regime feels has all those characteristics is the MEK. The one leader that Tehran fears the most is Mrs. Maryam Rajavi, the president-elect of the broader coalition of the National Council of Resistance of Iran (NCRI) which includes the MEK as a member.

This explains why the Iranian regime has been trying to bomb events supportive of MEK and kill their leaders, and why the regime has murdered tens of thousands of their members over the years and seeks to eliminate them even using terrorism in Europe and the United States.

Iranian terrorists and spies were caught recently in Belgium, France, Germany, Albania, and most recently right here in America with bombs and photos of senior members of the organized opposition.

The two Iranian spies arrested in the U.S. attended the opposition’s rally in New York last year with a “target package” that included “capture/kill operations,” according to the seized documents. New York has seen enough terrorism for several lifetimes; this must not stand.   Moreover, we can only conclude from an operation so brash that the regime in Iran feels threatened by all that is going wrong. They consider kthe MEK to be an existential threat.

In Europe, where Tehran is striving to shore up its relations with the EU, its diplomats are orchestrating bomb plots. Iranian agents planned to bomb a Nowruz celebration earlier this year in Albania, which both Maryam Rajavi and I attended.   Iran’s Ministry of Intelligence station chief for all Europe, based at its embassy in Vienna, and three others armed with bombs and explosives, targeted the annual conference of the NCRI in Paris, attended by some 100,000 Iranians from the diaspora and international dignitaries including several retired U.S. generals.

Tehran is willing to risk the political backlash of irrational terrorist activity abroad; the desperation of such acts is clear to the international community.

Of course, the regime’s terrorism starts at home, where it has killed tens of thousands of its own people.  For those in Iran who are the tip of the spear, standing up to the regime in protest, we must say:  We have your back.  Now is the time to follow Ronald Reagan’s path a generation ago, when he led America to embrace Solidarity in Poland. Then, the U.S. government embraced Polish liberators and patriots, and did not turn its back on them.  We must embrace Iran’s patriots so that their protest movement prevails as well.

The backing and tenacity of the organized Iranian opposition in the U.S., Europe and elsewhere for their brothers and sisters inside Iran is driving the latter’s will and courage. Those in Iran are putting their lives on the line in the name of freedom, and it seems that the more the regime attacks, imprisons and tries to kill them, the stronger the resistance becomes.

Iran apologists and detractors have questioned the MEK’s influence inside Iran. I have never doubted it. Why would the regime be so methodical in imprisoning, torturing and killing MEK supporters in Iran, as well as targeting its senior officials in Paris and New York if it didn’t feel threatened by it? The regime does not doubt the MEK’s strength in Iran and is on record identifying it as the only opposition movement capable of overthrow.

And that regime will be overthrown. It is a question of when, not if. Clearly, the people of Iran have had enough. The currency has plummeted.  In the streets, men and women are demanding a better life, and an end to the corruption and costly regional meddling that has robbed them of their futures.  Sanctions are working to cut off the ruling apparatus’ access to funds.These are the conditions that create change, and revolutions.

Nor should we fear what comes the day after the revolution. Iranians are demanding a democratic republic. Under the leadership of Maryam Rajavi and the movement of dedicated dissidents that she has established inside Iran and across the Western world, there is a strong and viable alternative that can make that happen.