They Can't Be Serious: Jake Sullivan Says Biden Admin. 'Safely and Effectively Drew Down' in Aghanistan 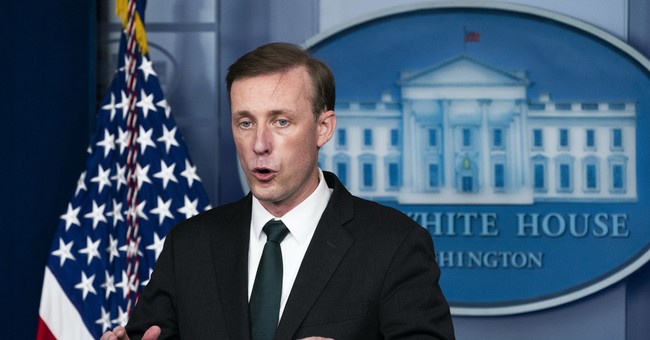 On Friday, National Security Adviser Jake Sullivan spoke at the Council on Foreign Relations about Biden's first year in office. Predictably, Afghanistan came up, with Sullivan trying to spin the withdrawal as a success.

At one point Sullivan boasted that "for the first time in 20 years, there are no U.S. troops in harm's way in Afghanistan this holiday season. We safely and effectively drew down our diplomatic presence. We lifted tens of thousands of vulnerable Afghans to safety in a unique American example of capacity, commitment and sheer logistics."

The full context of Sullivan's remarks on Afghanistan are similarly tone deaf.

"We have multiple overlapping crises that will continue to test us," he said, not acknowledging that the "crises" are arguably worsened by this administration. In noting that "we have to make hard choices going forward, just as we have had to make hard choices to date," Sullivan mentioned "Afghanistan was one of those hard choices."

What reference Sullivan made to the loss of American and Afghan life is as a relative aside. "The scenes over the course of August in Afghanistan were harrowing. The human costs, heartbreaking, for Afghans, for people who served there. President Biden had to think about the human costs of the alternative path as well, of remaining in the civil conflict in Afghanistan." Sullivan then pointed out that "when you conclude 20 years of military action in the civil war with the impact of 20 years of decisions that have piled up, you have to make hard calls, none of them with clean outcomes."

Sullivan then moved on to further self-congratulate the administration. "What you can do is plan for contingencies, to flow thousands of troops to an airport to be able to rescue tens of thousands of people and get them out of harm's way."

He steadfastly claimed that "standing here in December, that decision remains the right decision," before claiming that "we safely and effectively drew down."

It's worth recapping how badly the administration botched the withdrawal from Afghanistan, namely the loss of 13 American service members in a terrorist attack at the Kabul airport on August 26, 2021.

There was not merely a loss of American life in that terrorist attack, but of Afghan life as well. Further, earlier in August, human remains of desperate Afghans who clung to the airplanes were found in the plane's wheels.

President Biden, in a mid-August interview with ABC's George Stephanopoulos, reacted to the pictures of such horrific details with callous indifference, responding that "that was four days ago, five days ago." For what it's worth, it had actually been two days.

Democrats have consistently focused on polls indicating a majority of Americans believe that it was time to leave Afghanistan. While true, that is only one, very small part of the puzzle, though. Polls also indicate that Americans believe the administration botched the withdrawal, including the president's base, and that they did not want Americans and allies left behind.

Just as Americans give Biden low marks on withdrawing from Afghanistan and have blamed him for such a failure, they've also blamed the president for the death of those 13 service members.

Sullivan also claimed that "through our diplomacy and deterrence, we have been able to in the months that follow August 31 to offer a plane seat to every American who has wanted to leave Afghanistan and we continue to fly SIVs and other vetted Afghans out regularly and we will continue to do that in the months ahead as we follow through on the commitment that President Biden made."

Not only did the United States withdraw from Afghanistan with Americans still trapped, but Americans still remain. As I covered in a VIP piece last month, citing an AP Explainer from Ben Fox, who wrote that "private organizations such as Task Force Argo and others say they have heard from dozens of people in Afghanistan who have yet to be contacted by the U.S. government."

While Secretary of State Antony Blinken claimed that the number of Americans still trapped in Afghanistan was under 200 and "likely closer to 100," reporting from Ronn Blitzer with Fox News in late October cited a Pentagon report that put that number at close to 450.

Reporting from Foreign Policy on November 3 cited a "congressional aide familiar with the matter" to claim that the "State Department believes as many as 14,000 U.S. legal permanent residents remain in Afghanistan."

When it comes to those who have made it from Afghanistan to the United States, the number of those who have come over on Special Immigrant Visas (SIV) is not entirely comforting. As Leah reported on September 2, the State Department estimated that a "majority" of SIVs had been left behind.

Secretary of Homeland Security Alejandro Mayorkas has admitted the Afghans who did come over were not properly vetted, as Katie highlighted. In a September 22 column for Townhall, Terry Jeffrey noted that the Biden administration cannot be sure that terrorists have not come over, considering a majority were not SIVs, but rather over 70 percent had a "parolee" designation.

In fact, numerous Afghans who have come over have been accused and charged with rape.

As Adam Kredo reported for The Washington Free Beacon on Friday, "Four Months After Withdrawal, Biden Admin Doesn’t Know Identities of Afghan Refugees Resettled in US."

Kredo cited a letter from Sens. Ron Johnson (R-WI), Josh Hawley (R-MO), and Rick Scott (R-FL) demanding that the administration account for failure in vetting efforts and "address the lack of transparency regarding this evacuation and resettlement operation."

The situation looks to be far from as rosy as Sullivan would like to mislead Americans into believing. As a reporter during Friday's remarks alluded to, Afghanistan is facing a humanitarian crisis as the people who remain face mass starvation, poor medical care, and a non-functioning economy. There is also a particular concern for women's rights in Afghanistan now that the Taliban have retaken control, including and especially when it comes to little girls being sold to much older men as child brides.