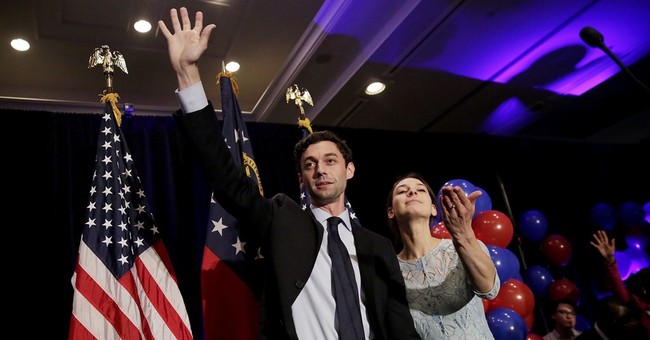 Georgia voters head to polls on Tuesday, and Democrats will nominate a candidate to take on GOP incumbent Sen. David Perdue (R-GA) in November. The Democratic primary is narrowed down to a three-way contest between Jon Ossoff, Teresa Tomlinson and Sarah Riggs-Amico. Ossoff has the advantage in fundraising, polling and name identification, given his swing-and-miss run for Congress in 2017. One of the three Democrats has to emerge from Tuesday’s primary with a majority of the vote, or the primary will continue into a runoff; with the last round of polling and fundraising, Ossoff appears to be on track to clinch a victory on Tuesday.

Following the death of George Floyd, which triggered nationwide riots in protest of police brutality, the movement to “defund the police” has gained traction among Democrats. While Joe Biden’s campaign says that the former vice president does not support the fringe movement, which has become more mainstream, Democratic lawmakers and candidates alike avoid a direct confrontation with the movement. All three Georgia Democrats hoping to win Tuesday’s primary did not immediately respond to Townhall’s request to comment on their support for or condemnation of the “defund the police” movement.

While Ossoff, as the frontrunner, declines to comment on the movement, not all of his supporters are remaining quiet. Ted Terry, a Democratic contender for local office in Dekalb County, Georgia, who has since endorsed Ossoff in the primary race, characterizes Minneapolis’s decision to dismantle the Minneapolis Police Department as a “bold step in reimagining public safety:”

If elected to the #DeKalb County Commission I will introduce legislation to end the current policing mode not just in unincorporated DeKalb but in each of our municipalities. It’s time for change at all levels of County policing. Community safety and support is the new mission.

We need more politicians who don’t just provide lip service to military families & veterans, but who also understand we honor them by preventing unnecessary wars. @ossoff knows the solemn responsibility a Senator has in deciding a declaration of war. He will choose with his heart https://t.co/maBJm70NcO

Once again, Ossoff has not indicated whether or not he, too, supports the radical action taken by Minneapolis’s City Council.

Sen. David Perdue (R-GA), whom the eventual primary victor of the Democratic primary will face in November, took note of this and rightfully called on Ossoff, Tomlinson and Riggs-Amico to make public their stances on the issue, in order to ensure transparency for Georgia voters:

In recent days we've seen radical Democrats call for the defunding of law enforcement during a time of crisis. Georgia voters deserve to know before tomorrow's primary if @Ossoff, @SarahRiggsAmico, and @TeresaTomlinson support this reckless and lawless proposal. #GASen #gapol

The Georgia Republican gets it right. The movement to “defund the police” is not only radical and unrealistic, but also comes with no real roadmap for public safety, if law enforcement were to be dismantled. As the “defund the police” movement grows into a center-stage campaign issue, voters deserve to know where candidates stand.