Sen. Perdue Rebukes Biden Campaign's Claim That Georgia Will Be Competitive in November 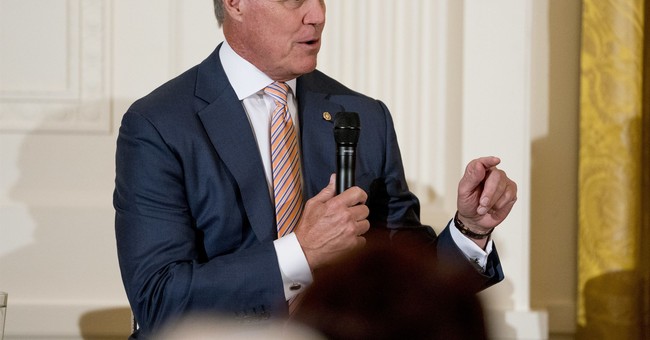 Former Vice President Joe Biden’s campaign is now telling supporters that the presumed Democratic nominee will be competitive in traditionally Republican states, come November, including Georgia. The Biden campaign identifies Arizona, Texas and Georgia as “battleground” states in the general election, all of which have not voted a Democrat into office in decades.

"Joe Biden, Stacey Abrams and their radical Democrat allies have made it clear that Georgia is in their sights this November as they push their socialist big government agenda on working families. Georgia will determine who wins the White House and who controls the U.S. Senate this November. As a political outsider, I have known from day one that we can’t take this fight against liberal Democrats for granted. I trust the people of Georgia to help me show America that the road to socialism will not run through the state of Georgia,” Sen. Perdue said in a release.

“We had a wake-up call in 2018,” Sen. David Perdue said in 2019. “The most liberal billionaires in America think they’re going to import their view on Georgia — their radical, socialist views. And this isn’t the first time they’ve tried it.”

Sen. Perdue is on the ballot in November, and will likely face one of three contenders in the Democratic Senate primary. While Democrats and the Biden campaign claim that Georgia is on the map, the non-partisan Cook Political Report declined to call the race a toss-up at this point. Both Georgia Senate seats are rated as “Lean Republican.”

As the Biden campaign sets their sights on winning Georgia and other battleground states, former gubernatorial candidate and state representative Stacey Abrams is reportedly under consideration for Biden’s vice presidential pick. Abrams, who infamously refused to concede her loss to GOP Gov. Brian Kemp (R) in 2018, would give the former vice president a far-left running mate who has built her entire repertoire around identity politics, as his campaign seeks to win battleground states.

While states such as Arizona could be feasible battleground states for the Biden campaign, flipping Georgia from red to blue is an unlikely feat for the former vice president. As Biden abandons his moderate views that are said to be able to unite the nation, and entertains the progressive faction of the Democratic Party’s demand for progressive and tax-heavy policies, the former vice president lessens his chance to win moderate voters. While establishment Democrats paint Biden as a moderate in order to win back Independent and anti-Trump voters, policy proposals such as the Green New Deal, socialized medicine, a repeal of the Hyde Amendment and a ban on fracking do not constitute moderate views.