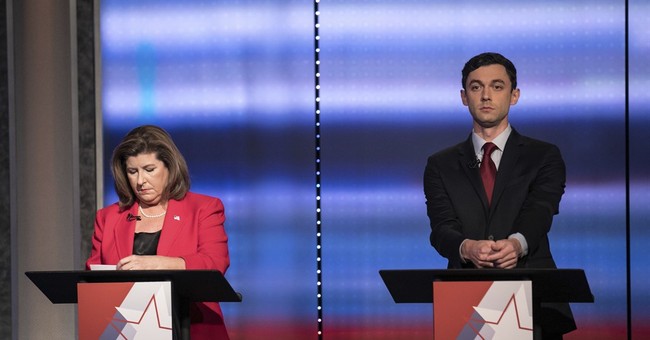 In fairness to the guy, he represents by far the Resistance's best shot of picking up a House seat ahead of the midterms -- which are still almost a year-and-a-half away -- so lefties from across the country have been pouring their hopes, dreams, and sweet, sweet cash into his campaign.  Plus, how likely is it that someone who doesn't even live inside the district he seeks to represent would be bothered by the fact that the vast majority of his campaign contributions have flowed in from people who also do not live in said district -- or even the state or region, for that matter?  For liberals, this is a national referendum on Trump, so big blue California (the land of passing single-payer healthcare with no plans to pay for its doubling of the state budget, and making abortion as accessible as possible by removing the requirement that actual doctors perform them) is taking the lead in boosting their preferred Nancy Pelosi ally.  Georgia values, etc:

Georgia congressional candidate Jon Ossoff, who’s turned his special election race next week into a referendum on President Donald Trump, reported receiving almost as much money from the Bay Area than from the entire state of Georgia over the last two months. He also reported receiving almost nine times as many individual donations from California than from Georgia, according to federal campaign finance data released last week…In money raised, Ossoff has blown Handel out of the water — thanks in part to the Golden State. Between March 29 and May 31, Ossoff reported receiving 7,218 donations from California, dwarfing the 808 donations he received from Georgia. In the nine Bay Area counties alone, he received 3,063 donations in the same time period. (Those are only a fraction of his total donations, as he doesn’t have to report donations from people who give less than $200 in total.) Overall, he reported receiving $456,296.03 from California — and $220,532.10 from the Bay Area — versus just $228,474.44 from Georgia. That’s an even larger disparity than from his earlier donations report in April...But for out of state donors, the idea of sticking one to Trump with an Ossoff win is the big draw.

Thanks in significant measure to Californians, Ossoff has vastly outraised Republican Karen Handel, the mainstream Georgia conservative who does reside in Georgia's Sixth Congressional District.  Using the Left's preferred terminology, you might say that rich out-of-state liberals and special interests are doing everything they can to buy this election.  But liberals are fine with that because they're not genuinely opposed to money in politics at all; just conservative money.  Thanks to their mountain of treasure, this has become the most expensive House race in US history, and it's not particularly close -- with early ballots pouring in:

More than 140,000 ballots had been cast when early voting in the district closed Friday, showing widespread interest in the race. The race is the most expensive House race in history, with both candidates spending around $50 million.

Another source puts the 'dollars spent' figure north of $40 million.  The previous record was approximately $30 million dropped into a 2012 Florida contest.  GA-06 was carried easily by then-Congressman (now HHS Secretary) Tom Price in 2016, who won nearly 62 percent of the vote.  But on the same day, Donald Trump barely edged out Hillary Clinton by a lone point.  The public polling average shows the liberal Ossoff with a very slender lead; if he wins, his enormous war chest and Democratic enthusiasm will have carried the day.  But the last four surveys have been within the margin of error, including a one point race and an exact tie:

I interviewed National Journal's Josh Kraushaar while guest-hosting the Hugh Hewitt Show, and he told me that his sources within both parties expect an extremely close finish, likely within a point or two in either direction.  By the way, there's another special election doing down tomorrow in South Carolina, where voters will pick a replacement for President Trump's OMB Director, Mick Mulvaney.  Polling suggests Republicans should retain the seat comfortably, but it looks like they aren't talking any chances:

.@CLFSuperPAC is spending $50K on GOTV targeted to 70,000 low and mid-propensity GOP voters ahead of #SC05 tomorrow.

I'll leave you with Handel's closing argument ad from the Georgia race:

Oh, and by the way, were you aware that the left-wing shooter who tried to assassinate a bunch of Republicans last week recently railed against Handel on Facebook? You didn't? It's almost as if the media isn't covering that obvious national angle heavily. Does anyone doubt they'd be doing so if the partisan dynamics were the opposite of what they are?
Share this on Facebook
Tweet
Woke Tales: New 'Equity' Charges at Restaurants, Censorship at Large State University
Guy Benson
Biden Called Out For Falsely Claiming Delta Variant Is 'Deadlier' Than Previous Strains
Scott Morefield
President Biden: 'It's Awful Hard to Get Latinx Vaccinated'
Rebecca Downs
Here Are the Two GOP Senators Who Refused to Sign the Letter Opposing Biden's Gun Grab
Matt Vespa
President Biden May Have Killed the Bipartisan Infrastructure Plan By Tying to $6 Trillion Budget Proposal