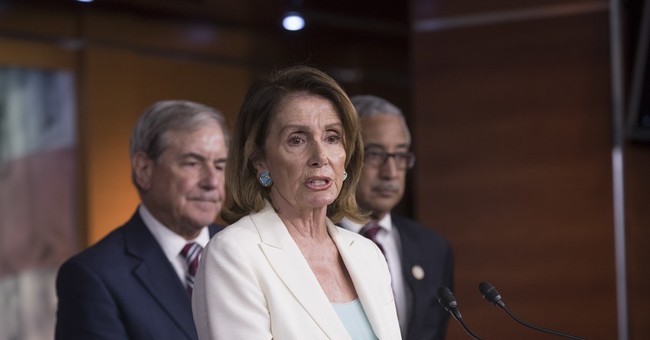 Well, House Minority Leader Nancy Pelosi (D-CA) seems to be content in la la land, as the aging Democrat seems to think that her party has defeated the GOP in “every fight” this year. In what universe is that true?

San Francisco’s Pam Moore of KRON4 said that the GOP was in a state of disarray, but that the Democratic Party seemedincapable of capitalizing that to their advantage.

"What do you mean not capitalized? We’ve beaten them on the appropriations. We’ve won every fight. The president’s numbers are in the high thirties,” Pelosi replied.  She added that Democrats are working to retake Congress next year, and that Republicans hop onto their “Better Deal” agenda, which she had trouble remembering recently.

First of all, no one cares about appropriations since you’ve lost the battles that matter when it comes to politics: elections. In special elections, Democrats have yet to win one at the federal level. They managed to flip one state legislature seat. That’s one down 999 to go. As you know, there are 1,000 fewer Democrats in office across the board and the party’s obsession with making single-payer a litmus test and pushing the party to the Left will make it all the easier for Republicans to remain in the majority. Also, concerning polling, there’s a bit of nuance. The people don’t like his personality. When it comes to policy, economics, and consumer confidence, Trump scores higher, much higher, like enough to keep the GOP majority next cycle. So, let’s recap this history of failure on the Left.

Democrats lost the special election in Kansas to replace Rep. Mike Pompeo, who is now CIA director. They lost the race in South Carolina to replace Rep. Mick Mulvaney, who is now the director of the Office of Management and Budget. They lost the special election in Montana to replace Ryan Zinke, who is now secretary of the interior. That race was like WWE Summer Smackdown, as the winner, Republican Greg Gianforte body slammed The Guardian’s Ben Jacobs after finding his questions about the GOP health care agenda annoying. Then, there was the big kahuna. Rep. Tom Price (R-GA) resigned to become President Trump’s Heath and Human Services secretary.

Trump was not popular in Price’s district, Georgia’s sixth congressional district, and Democrats felt this was the one; this was the race they could win. Given it’s Republican tradition, it also served as a bellwether for other Democratic attempts, as they party works to regain the majority in the House. That path goes through such red-leaning districts. Around $30 million was sunk into this race on the Democratic side. It was the most expensive House race in history, with at least  $40-50 million being spent in total from both sides. Jon Ossoff, the Democrat, couldn’t break 48 percent. He lost to Republican Karen Handel. So, out of this history of failure, Pelosi feels that her party has emerged victorious somehow.

I know Pelosi has a job to do: look confident and rattle the sabers for 2018. But this is just not grounded in reality this “we won every fight” business. It’s the mentality you’d expect from a woman who lives deep inside the progressive bubble. Also, let’s not forget that Nancy has been saying the Democrats were going to retake the House multiple times, all ending in dismal failures. Pelosi has referred to Trump as Bush multiple times this year and thought the National Rifle Association was part of our intelligence apparatus.

Oh, and one last thing about polling, Nancy. You’re more toxic than Trump in some parts of the country. In fact, in these are the very parts your party’s candidates need to succeed in to retake the House.