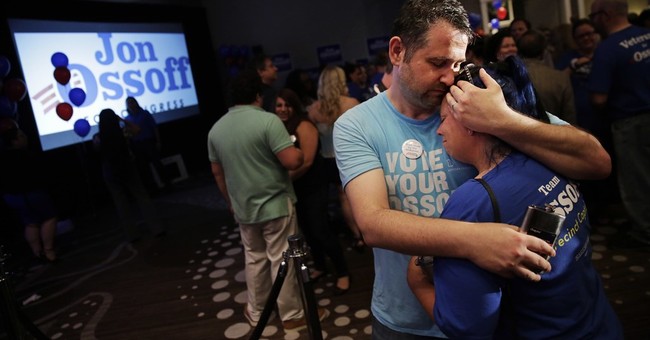 Of the four special elections held to replace Republican Congressmen who have departed Capitol Hill to join the Trump administration, GA-06 was Democrats' best shot at victory, and they knew it.  First, they won a 'moral victory' by over-performing in Mike Pompeo's old Kansas district, but still lost.  Next, they won another 'moral victory' by (arguably) over-performing in Ryan Zinke's old Montana district, but still lost.  Then they surprised everyone with yet another 'moral victory' by unexpectedly over-performing in Mick Mulvaney's old South Carolina district (more below) but still lost.  Georgia, however, was always the real prize.  Sure, it's a traditionally Republican district that the GOP's House and Senate nominees won by roughly 20 points in November, but Donald Trump very narrowly defeated Hillary Clinton there, squeaking through by less than two points.  So it's by no means a 'Trumpy' district.

Sprinkle in the ongoing Russia controversy, an allegedly toxic Republican healthcare bill, and a sagging presidential approval rating, and Democrats could smell political blood in the water.  Finally, factor in the Left's much-discussed intensity advantage, and the literally unprecedented sum of money they poured into the race, and the stage appeared set for that elusive, inspirational victory 'The Resistance' has been pining for.  Polls gave Democrat Jon Ossoff a modest lead down the home stretch of the campaign, with late movement to Republican Karen Handel.  It was going to be tight as a tick, it seemed, with enthusiasm and energy being Ossoff's potential secret sauce.  And then this happened:


Perhaps the networks ought to start projecting moral victories for Democrats.  A few thoughts on Handel's victory:

(1) The gloating GOP take: Democrats wanted this one badly, and they hyped it like crazy.  They spent somewhere in the ballpark of $30 million to make a statement, and they face-planted.  Their inexperienced, liberal, Pelosi-backed, pro-Obamacare candidate didn't even live in the district, keeping his campaign afloat via donations from non-Georgians.  With a proverbial "perfect storm" brewing in precisely the type of district (affluent, well-educated, suburban) that Democrats are going to need to turn blue in order to have a chance to win back the House next year, the GOP base also got fired up and turned out in force.  In a high-stakes, high-intensity, high-attention, high-dollar, high-expectations, high-turnout battle, Democrats again fell short.  With the brightest lights were burning, and both bases fired up, conservatives prevailed.  Liberals' perfunctory Twitter spin soon gave way to angry recriminations, highlighting how demoralizing the loss really was.

(2) The Democratic counterpoint take: Yes, Trump struggled in the district a few months ago, but GA-06 has been a GOP stronghold for decades.  The fact that the party needed to pump tens of millions into a red district just to retain it against a 30-year-old neophyte candidate shows that there's potential trouble brewing ahead of the midterms.  Also, don't forget that Democrats chirped about a big Pennsylvania special election hold back in 2010, which some analysts said took the air out of the "GOP wave" balloon.  A few months later, Republicans won 63 House seats:


Republicans breathe huge sigh of relief. But they should remember: Democrats held onto #PA12 just months before GOP won majority in 2010. https://t.co/gR2He0mdxm

(3) The counter-counterpoint take:  The Keystone State example is one data point, but there were also signs of the 2010 tsunami building ahead of time, including some outlier upsets early on in that cycle:


So far, counting all of the federal and state legislative special elections held since Trump's victory, Democrats have flipped zero Congressional seats and two state-level seats (NY, NH), while losing a state-level seat in Louisiana.  That nets out to...one seat regained out of more than 1,000 lost by Democrats under President Obama.  And the Georgia race may point to additional evidence that voters in Trump-skeptical districts may be willing to differentiate between rank-and-file Republicans and the non-traditional Republican president:


Either way, since national liberals clearly wanted to make GA-06 a "referendum" on Trump, he was more than happy to accept that framing and remind them of the verdict:

Well, the Special Elections are over and those that want to MAKE AMERICA GREAT AGAIN are 5 and O! All the Fake News, all the money spent = 0

(4) The cold, but probably correct, take:  November 2018 is almost a year-and-a-half away, and none of these special elections will matter at all by then.  That said, Democratic demoralization may have some important ramifications in terms of fundraising (although as we've learned yet again, try as they might, Democrats can't necessarily just buy themselves electoral victories) as well as candidate recruitment.  Republicans also saw that in red districts, 'Trumpcare' may not be the silver bullet that liberals seem to think it is based on some polling -- and that a very special someone remains a juicy target to motivate Republican and independent voters:

If Handel wins, one takeaway will be that running against Nancy Pelosi remains a potent message for GOP, even in Trump era. #GA06

Nevertheless, the out-of-power party historically makes gains in midterm elections, and as much as conservatives will snicker at Democratic "moral victories" thus far, this pattern does suggest that at least some gains are quite likely:

(5) The 'hey, there was another election last night' take: But look at how close Democrats came in a ruby red South Carolina district, some commentators are interjecting.  Fair point, sort of.  Even though Democrats controlled that seat basically forever until 2011, it is a very conservative area, so the GOP nominee's narrow, three-point win last night was a surprise.  But it was close because turnout was pretty depressed, unlike in Georgia, so this strikes me as indisputably correct:

If Parnell loses #SC05 by 4-5%, lots of Ds will point fingers. But it's possible he's doing well *because* he wasn't hyped, not despite it.

Perhaps Democrats would be better off not drawing attention to, or spending money on, their candidates? https://t.co/GD3LC3NGQP


And since we're snarking, in light of Jon Ossoff's notoriously Left Coast-heavy fundraising sources, I'll leave you with this: