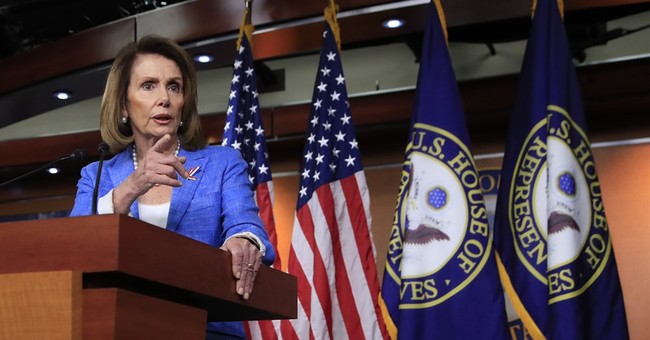 I know it may not be news to some since she’s a California liberal, who by default has a shaky grip on reality. Maybe it’s emblematic of what’s happening to the Democratic Party as a whole, but the House Minority Leader Nancy Pelosi (D-CA) is just losing it. She’s mixed up Donald Trump and former President Bush at least three times this year. She thought the National Rifle Association was part of the intelligence community. Yet, this is all okay because Pelosi could be the gift that keeps on giving and if that’s the case—we want her to be the House leader for the Democrats for many years to come. For starters, Pelosi was one of the contributing factors to Jon Ossoff’s defeat in Georgia’s sixth congressional district.

In days after Ossoff’s defeat, Pelosi faced a small, but vocal insurgency within the ranks of her party who are desperately seeking new leadership. You can’t blame them; they’re tired of losing. Republicans felt the same way after 2008. The Tea Party was formed in 2010, they helped Republicans retake Congress, and now they have the presidency, along with an unprecedented level of strength at the state and local level. Two-thirds of all the governorships and 69/99 state legislatures are in GOP hands, with over 4,100 elected state officials. That’s the most since the Republican Party was founded.

Right now, the GOP is facing some issues with congressional Democrats and within their own ranks concerning governing, especially on health care. This could be a teachable moment as well. Republicans are in the position they’re in thanks to the unbridled liberal agenda put forth by then-Speaker Pelosi. She has cost her party dozens of congressional seats, partially because she also put forward bills that had zero chance of passing. Republicans should have kept this in mind when it comes to health care.

Even with Trump’s lackluster approval ratings and his legislative agenda being in a constant state of neutral, Democrats were unable to capitalize on anything, losing four special elections in a row. Should we thank Nancy Pelosi? Former House Speaker Newt Gingrich seems to know her value when it comes to winning elections, so does President Trump. And even if Pelosi drops off the face of the earth, there’s always Hillary Clinton to make for a good villain for the 2018 midterms. And you know she’s going to come out of the bunker hard next year because well—she just can’t help herself.

Still, for Pelosi, the world is her oyster. She defiantly said that it’s not up to the people in her party who want her to go to decide whether she steps down or not. That will be on her watch. Then, she says on CBS This Morning how much she adores the support of her caucus. Then, she blames her own party for not having a message to win elections. Lady, you’re part of that problem.