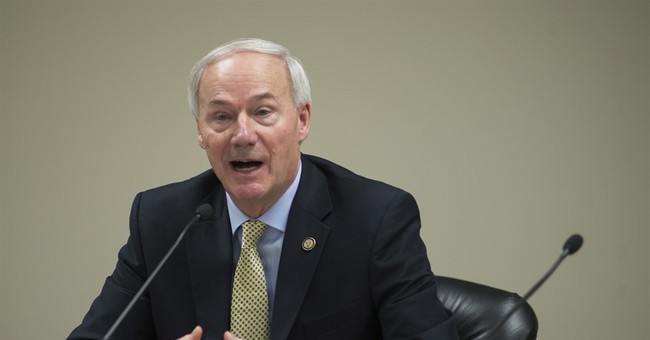 Arkansas GOP Gov. Asa Hutchinson said in an interview on Sunday that the state’s near-total abortion ban should be “revisited” in the event the United States Supreme Court overturns Roe v. Wade. Arkansas’ abortion law, which would go into effect if Roe is reversed, allows abortions to save the life of the mother but does not include exceptions for rape or incest.

Hutchinson made the remarks in an interview with CNN’s Dana Bash on “State of the Union.” In the interview, Bash pressed Hutchinson on the law in regards to abortions in cases of rape or incest, specifically, why a young girl impregnated by family member should be required to carry a pregnancy to term.

"If Roe v. Wade is reversed, then the trigger law in Arkansas would come into effect," he said. "Life of the mother and rape and incest are two exceptions I believe should have been added."

“While it’s still life in the womb, life of the unborn, the conception was under criminal circumstances, either incest or rape. And so, those are two exceptions I have recognized I believe are very appropriate,” the Governor said in the interview.

Hutchinson went on, saying that “as time goes on, if Roe v. Wade is reversed, these are going to become very real circumstances.” He added that the state’s laws on abortion could be “revisited.”

“I believe that those exceptions [rape and incest] are going to be important,” he said, adding that “the public understands those exceptions, the importance of it. So I think that will be revisited.”

Arkansas is one of several states with a “trigger law” on the books in the event Roe is overturned. Other states include Louisiana and Missouri. Other states, like Michigan and Wisconsin, have anti-abortion laws that pre-date Roe. Townhall covered Michigan’s Attorney General Dana Nessel said she will not enforce the 91-year-old law if Roe is overturned.

“Politicians do not belong in our doctor’s offices, they don’t belong in our bedrooms and should not be making these kinds of decisions on behalf of the American public and behalf of women across America,” Nessel said in an interview with NBC’s “Meet the Press” this month.

On the other hand, other states like South Dakota, Idaho, Texas, Arizona, Nebraska and Florida are moving forward legislation protecting the unborn.