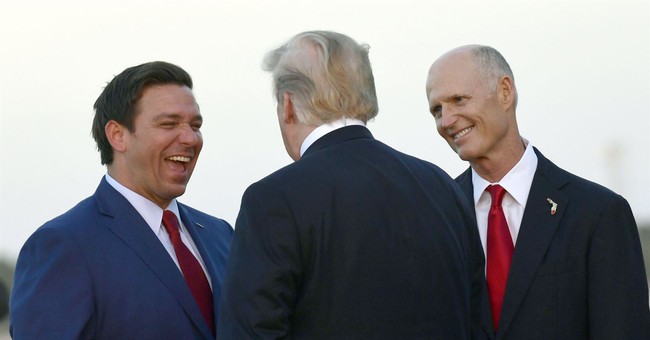 We've been tracking the situation in Florida very closely for the past two weeks -- and for good reason.  At stake were two crucial questions: First, would the country's most populous and diverse presidential battleground state be governed by an ethically-challenged borderline socialist for the next four years, or an enthusiastic ally of the president's re-election campaign?  And second, would Republicans knock off a fourth Senate Democratic incumbent (each of whom voted against Justice Kavanaugh), consolidating control of Congress' upper chamber?  Floridians' answers to both questions favored the GOP, as we've known for days.  After initially conceding the gubernatorial contest, Democrat Andrew Gillum un-conceded as the final results tightened.  Over the weekend, he re-conceded:

I want to congratulate @RonDeSantisFL on becoming the next Governor of the great state of Florida. My wife R. Jai and I could not be prouder of the way we ran this race. We could not be more thankful to my running mate, @ChrisKingFL and his wife Kristen.

Andrew Gillum, the Democratic gubernatorial candidate in Florida, conceded to his Republican opponent, former Rep. Ron DeSantis, on Saturday, ending a protracted fight that saw the Tallahassee mayor take back his Election Day concession during a statewide recount. The concession ended Gillum's first bid for statewide office in Florida, but the run -- despite his loss -- vaulted the 39-year old politician into the upper echelons of Democratic politics. "R. Jai and I wanted to take a moment to congratulate Mr. DeSantis on becoming the next governor of the great state of Florida," Gillum said in a Facebook video in which he appeared alongside his wife. "This has been the journey of our lives." DeSantis responded to Gillum's concession with a call for unity. "This was a hard-fought campaign," he wrote on Twitter. "Now it's time to bring Florida together."

Florida US Senate results after the manual recount. pic.twitter.com/s1gjkxXo3K

That's a margin of about 10,000 votes for Scott -- although his total should include roughly 800 additional tallies (see below). At long last, Nelson conceded defeat on Sunday afternoon.  A few intriguing internals from the exit polling:

Also, among Floridians who said Bill Nelson's vote on Kavanaugh was an 'important factor' to their decision, Scott won by eight points. #FLSen pic.twitter.com/pq1TmJYqEG

The most worrying numbers for Republicans were the lopsided margins by which Nelson carried all voters under the age of 45.  Regardless, Broward County is in dire and urgent need of root-and-branch election reforms:

Machine recount has Nelson with 779 fewer votes than the older count that Broward has decided to use. https://t.co/7gpSrTJ04o

As we discussed on Friday, Scott gained 779 votes in the county's machine recount, the results of which they submitted two minutes past the state deadline.  They then decided to use the previous, more Democrat-friendly numbers as their official baseline, as instances of additional incompetence came to light:

Lawyers discovered that several of the 10,000 overlapping ballots, which clearly marked a vote for the agriculture race but were unclear in the Senate vote, appeared in Saturday’s piles. “It appears there may have been some envelopes from yesterday mixed in,” Carpenter-Toye said. Republican lawyer Joe Goldstein asked for a do-over to Saturday’s manual recount so the offending ballots — he said he saw around 10 envelopes’ worth — were fully sorted out...Snipes told the board Saturday that she believed human error in the sorting of ballots contributed to the discrepancy between the first count and the machine recount. That, she said, was the “most accurate” explanation of what happened. “The votes are in the building,” she said. “I know that sounds trite, it sounds foolish.” She said some staffers tasked with sorting ballots ahead of the machine recount were “not as well trained as some others” and that led to some ballots being “probably mixed in.” “I’m not blaming anyone,” she said. Republican lawyer Joseph Goldstein cautioned Snipes not to double count any votes in fixing the errors with the machine recount.

Throughout this entire process, Broward has been an embarrassment, full stop -- and Broward officials' administration of elections has been an embarrassment for years.  It's important that conservatives continue to press for a final resolution to aforementioned law violations, and more importantly, the apparent organized fraud by Florida Democrats we outlined last week.  Just because Republicans eventually prevailed by sufficient margins this time doesn't mean that full explanations and accountability are no longer needed.  Brenda Snipes' resignation is certainly a start.  Anyway, with DeSantis' win, Republicans will control 27 governorships across the country, to Democrats' 23.  That's a net gain of six for the opposition party (flipping Illinois, Kansas, Maine, Michigan, Nevada, New Mexico, and Wisconsin), with Republicans only picking up Alaska.

In the Senate, Mitch McConnell will lead a 53/47 GOP majority, up from 51/49.  McConnell has said that especially in an era of divided government on Capitol Hill, his top priority will be the continued confirmation of federal judges.  His already-historically-fruitful partnership with President Trump on this front will continue apace for at least the next two years, now with a more comfortable margin for error in close whip counts.  This could prove crucial in the event of additional high-profile judicial confirmation battles.  Re-read the stat I posted above; Kavanaugh mattered, and Republicans swelled their Senate numbers because of Democrats' outrageous conduct.

I'll leave you with an interesting piece of trivia about outgoing Governor and incoming Senator Rick Scott: He barely won Florida's gubernatorial election in 2010, prevailing by a hair over one percentage point.  Four years later, he won re-election by exactly one percentage point.  And now he's been elected to the United States Senate by a fraction of one percentage point -- although for the first time, he finally cracked 50 percent statewide.  Florida is a very closely divided state.  And by the way, Rick Scott spent a lot of his own money to win this race, but Democrats and their allies lobbed tens of millions at him to fortify Nelson, and failed:

DC based interest groups spent more than 50M in a failed bid to beat Rick Scott. Largest sum they have ever spent to try to protect a Dem US Senator. https://t.co/k6fTQet1Lb