Bottom Line in Florida: Broward County Election Officials Have Been Violating the Law 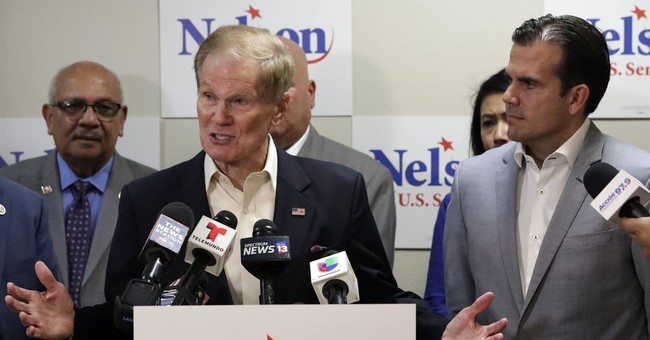 By now, you know that Republicans are raising the alarm over what's happening in Florida, as the margins apparent election night GOP victories -- punctuated by Democratic concessions -- are being whittled down in a heavily blue county.  As expected, Democrats are falsely accusing the GOP of wanting to stop the process of counting votes.  Republicans counter by raising a top Broward County election official's known history of malfeasance and incompetence, aggressively accusing the opposition party of try to steal an election, noting that the county has "discovered" tens of thousands of votes since election day, refusing to say how many more there are, or where they've been.  Some of this may be dismissed as partisan shouting over the dramatic denouement of yet another tight Florida contest.  But it's important to understand that overwhelmingly liberal Broward and Palm Beach Counties have been in ongoing violation of election law.  That is the central issue here:

Day 3 of the Broward & Palm Beach County Supervisors abject display of ineptitude. 102.141 4(b) details the process by which ballots shall be counted. This is not about ballot length, as Miami-Dade, the single largest county in the state did not have this problem. pic.twitter.com/zTs1rdGVg2

By law, each county must report all vote-by-mail ballots they've tabulated within half an hour of polls closing.  As other ballots remain uncounted, counties must offer regular, specific and public updates every 45 minutes until the process of counting is complete.  This has not happened.  At all.  In fact, Broward officials have repeatedly been unable or unwilling to even say how many ballots remain to be tabulated -- understandably leading to furious charges of dangerous and lawless incompetence, at best, and partisan manipulations or fraud at the worst.  And as the tweet above notes, Broward (the worst offender) has no excuse to use as a crutch.  Nearby Miami-Dade, home to more people, has a longer physical ballot, yet they managed to get this done in a timely fashion, in accordance with the state's legal requirements.  And GOP-heavy counties in the Panhandle did the same, despite getting hammered by a powerful hurricane just a few weeks prior to the election.  Sen. Marco Rubio, who has been sounding the alarm for two days (Republicans have sued -- read this), isn't letting this go:

A veteran elections watcher, effectively pushing back against critics who are accusing Rubio and others of fueling baseless conspiracy theories, reinforces the Senator's sense of alarm:

I spend most of my spare time immersed in counting of votes, the mechanics of it, the analysis of it. There is no excuse or justification for what is currently going on right now in Broward Co, FL. Sometimes candidates whine about these things for no good reason. Not this time.

Again, the best case scenario here is that Broward officials -- who have been slapped by courts for wrongfully destroying ballots and engaging in other misconduct and ineptitude in the past -- are being outrageously evasive about their gross incompetence.  That's the charitable spin.  For what it's worth, Charles C.W. Cooke of National Review, a Florida transplant, believes both Rick Scott and Ron DeSantis likely have large enough cushions to withstand whatever is happening in Broward and Palm Beach Counties, assuming there aren't tens of thousands of additional/alleged votes still lurking somewhere.  Several signs suggest that there aren't many ballots left in this circus:

This would mean, at the current ratio, that DeSantis could survive 93,801 more ballots being counted in Broward and Scott could survive 36,071. Are there that many left? It's unclear because Broward is a disaster, run by a crook. But this suggests not: https://t.co/kHmkYQNpgU (4)

Dr. Snipes said Broward is done counting all votes except for military/overseas and provisional. Here’s the change in Broward’s reported votes since 4:30pm, as tracked by @ceostroff pic.twitter.com/jeXIvXzMot

Let's say, as appears probable, that the finalized vote totals show the two statewide Republicans have won their respective elections by thousands of votes each -- but one or both margins are close enough to trigger mandatory recounts.  Should the GOP be nervous?  Based on history, probably not: "Recounts typically don’t swing enough votes to change the winner. Out of 4,687 statewide general elections between 2000 and 2015, just 27 were followed by recounts...The mean swing between the top two candidates in the 27 recounts was 282 votes, with a median of 219. The biggest swing came in Florida’s 2000 presidential election recount, when Al Gore cut 1,247 votes off George W. Bush’s lead, ultimately not enough to flip the state to his column." Relatedly, it looks like Democrats have other math and margin problems.   I'll leave you with a New York Times columnist spreading reckless tinfoil hattery because he's an irresponsible sore loser who's blinded by knee-jerk, anti-intellectual partisanship:

This seems... less than responsible pic.twitter.com/67UwXUcasG