The Math: It's Almost Certain That Rick Scott and Ron DeSantis Have Won in Florida 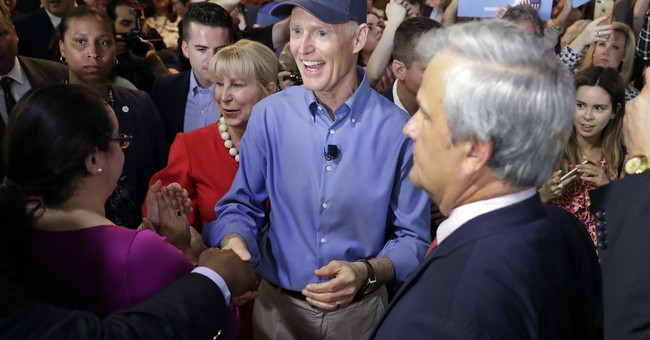 Amid the violations of law by Broward and Palm Beach County elections officials, the data provides apparent good news for Republicans.  First, despite the national media's typical laziness and derelictions, the local press has largely been assiduous and conscientious -- certain framing aside.  Second, core concerns raised by leading Republicans (some of which were rhetorically overblown) have been validated by multiple judges.  The ineptitude and misconduct has not gone unnoticed.  Third, in spite of Democratic lawyers' best efforts, Republican leads in key races are likely insurmountable.  National Review's Charles C.W. Cooke has been following this closely, and relayed his analysis over the weekend, with recounts underway:

Florida update. All 67 counties have now reported, and we have an unofficial vote tally. As it stands, DeSantis leads Gillum by 33,684, and Scott leads Nelson by 12,562. That will precipitate an automatic recount for DeSantis, and a manual recount for Scott. (1)

Based on Cooke's calculations -- which bake in several highly favorable assumptions for Democrats (in some cases, implausibly so) -- both major stateside Republicans are in good shape:

Even in that generous scenario, DeSantis keeps a lead of 30,484, while Scott keeps a lead of 9,362. That means Gillum would need 15,242 votes to flip, and Nelson would need 4,681. That seems unlikely—although nothing is impossible. (8)

He even runs through a scenario under which Bill Nelson's Broward County "undervote" is deemed attributable to some sort of nefarious problem, under which Democratic attorneys could make (unrealistic) headway.  In that unlikely case, DeSantis would nevertheless be fine, but Rick Scott's lead would dwindle down to vulnerable territory -- although he'd still be ahead:

Which is to say that, as it stands, Ron DeSantis is the next governor of Florida, and, barring some catastrophic errors in tabulation, or some remarkably creative lawyering, Rick Scott is Florida's next Senator. But it's Florida, so . . . (12/12)

The full thread is quite encouraging for Republicans, even with Cooke noting that nothing should be fully ruled out until this ordeal is officially over.  Also, let's assume that the vote totals shift here and there as tiny handfuls of ballots are still being recorded -- but not by much.  With the aforementioned recounts in process, please recall that the likelihood of this process changing outcomes is... quite slim.  FiveThirtyEight:

Recounts typically don’t swing enough votes to change the winner. Out of 4,687 statewide general elections between 2000 and 2015, just 27 were followed by recounts, according to data compiled by FairVote, a nonpartisan group that researches elections and promotes electoral reform. Just three of those 27 recounts resulted in a change in the outcome, all leading to wins for Democrats...Recounts also typically don’t change the margin by an amount that would be large enough to affect the result of this year’s presidential election. The mean swing between the top two candidates in the 27 recounts was 282 votes, with a median of 219. The biggest swing came in Florida’s 2000 presidential election recount, when Al Gore cut 1,247 votes off George W. Bush’s lead, ultimately not enough to flip the state to his column.

Nate Silver also explores the most obvious reason for the Broward Senate "undervote:" Yet another questionably-designed ballot by the heavily-Democratic County.  It's important for Republicans to remain vigilant, but the math strongly suggests that Florida will soon certify that Ron DeSantis and Rick Scott have been elected Governor and Senator, respectively.  Those aren't done deals, but the evidence currently points in a positive direction.  In other uncalled statewide races, Arizona (Senate) is looking better for Democrats, while Georgia (Governor) is favorable for the GOP.  By the way, there's a realistic scenario wherein both Kyrsten Sinema and Martha McSally will be members of the United States Senate very soon.  And on the Georgia race, read this breakdown of why Democratic hyperventilating about 'voter suppression' is overblown and hyperbolic:

I'll leave you with Marco Rubio slapping down the pitiful race-baiting from an incompetent (at best) Palm Beach County elections official:

The “demographics” of #PalmBeach voters is Americans & Floridians.

“Unfortunate” is your refusal to count their votes in accordance with the law.

And you are “disrupting” our democracy by violating laws,refusing to comply with court order & threatening to have media arrested. https://t.co/H9gjrvVeDD