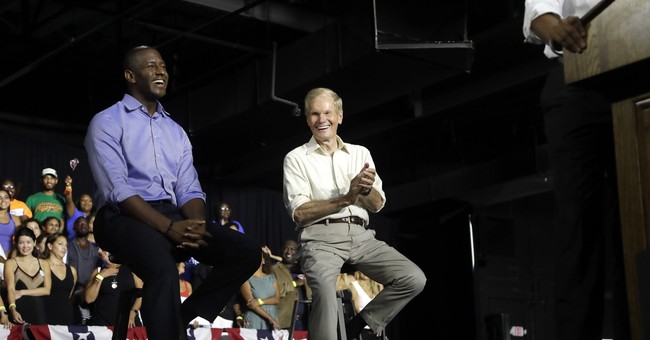 We're a week-and-a-half past election day, and Florida Democrats are still refusing to concede the gubernatorial and Senate races they've almost certainly lost.  Because the GOP's victory margins were quite thin, mandatory recounts were triggered -- but those margins are still large enough (roughly 34,000 and 13,000 in the governor and Senate contests, respectively) that the outcomes are not in doubt.  Following the required machine recounts, apparent newly-elected Senator Rick Scott actually gained a few dozen votes, while apparent Governor-elect Ron DeSantis lost a total of...one vote.  Via an Orlando Sentinel reporter:

Machine recount totals out for three races. By my count, Scott's lead in US Senate grew by 41 votes; DeSantis' lead for governor dropped by 1 vote; Fried's lead for agriculture commission fell by 19 votes

In reality, Scott should have gained hundreds of additional votes, but two Democratic counties -- Broward and Hillsborough -- missed their submission deadlines, thus reverting back to their previous, less accurate (and less Scott-favorable) counts:

HOLD UP. Broward just said they were actually 2 minutes late so their first total will count, *not* the recount. Also the discrepancy of 2,040 votes was due to a "comingling of ballots," said Joseph D'Alessandro https://t.co/F9AT93lJsC

Recall that the previous count in Broward improperly included votes that had been ruled invalid.  A fair point:

Imagine the media coverage if a Republican county claimed to just accidentally fail to submit a recount with a vote bump for a Democrat.

It looks like Broward will seek to use the updated tally baseline to resolve its final number, after the hand recount takes place.  Palm Beach County, another Democratic stronghold, missed its deadline, too.  A cynic might say that it almost looked as if they were trying to do so.  A judge rejected Democrats' extension requests.  All of this comes on the heels of a shocking story about apparent coordinated voter fraud machinations from Florida Democrats.  There must be a full investigation into this:

A day after Florida's election left top state races too close to call, a Democratic party leader directed staffers and volunteers to share altered election forms with voters to fix signature problems on absentee ballots after the state's deadline. The altered forms surfaced in Broward, Santa Rosa, Citrus and Okaloosa counties and were reported to federal prosecutors to review for possible election fraud as Florida counties completed a required recount in three top races. But an email obtained by the USA TODAY NETWORK - Florida shows that Florida Democrats were organizing a broader statewide effort beyond those counties to give voters the altered forms to fix improper absentee ballots after the Nov. 5 deadline. Democratic party leaders provided staffers with copies of a form, known as a "cure affidavit," that had been modified to include an inaccurate Nov. 8 deadline. One Palm Beach Democratic activist said in an interview the idea was to have voters fix and submit as many absentee ballots as possible with the altered forms in hopes of later including them in vote totals if a judge ruled such ballots were allowed.

One Democratic campaign operative says he warned internally against the scheme, but it moved forward anyway:

Jake Sanders, a Democratic consultant in the Treasure Coast who saw the email, told the USA TODAY NETWORK - Florida that he warned party staffers about the legality of using an altered form, but was ignored. "I warned FDP staff members of the questionable legal status of altering a state form and misleading people their vote would be counted before the court case played out," Sanders said. "And coordinated campaign leadership told them to keep pushing it that, 'We are exhausting every possibility.'" ...To Sanders, the party was not being upfront with voters and "undermining making sure every vote counts." "They should have been saying, 'This is unprecedented. We are fighting for your vote to count. Fill this out so we can fight for you.' But self-imposing a fake deadline and deceiving people is counter to that," Sanders said.

State Republicans blasted this as an "illegal scheme" and "organized fraud," and the matter is reportedly the subject of a requested federal probe.  Between the instances of absolute ineptitude, the clear violations of law, and this apparent malfeasance (altering official documents to change deadlines would seem to cross a clear line into fraud), this vote-counting season has been a disgrace in a small handful of Florida's left-leaning counties.  The bad news is that these issues and tactics persist, and must watched with vigilance.  The good news for conservatives is that despite their best efforts, Democrats appear to have lost anyway.  Rick Scott, effectively re-declaring victory, sounds slightly annoyed:

Last week, Florida voters elected me as their next U.S. Senator and now the ballots have been counted twice. I am incredibly proud and humbled by the opportunity to serve Florida in Washington. Our state needs to move forward.

Neither Nelson nor Andrew Gillum have conceded, even though the initial recount confirmed that they've been defeated (Gillum rescinded a concession days ago).  The Senate race is headed for a hand recount of a small subset of ballots with 'over' and 'under' votes, but few expect that process to shift the overall results.  In recent days, the national media has scolded Republicans for supposedly fear-mongering about 'fraud' in Florida, even though their suspicions now appear to have been well-founded.  They've also attacked the GOP for undermining faith in the electoral process.  And yet, prominent Democrats from Cory Booker to Sherrod Brown to Hillary Clinton are openly and baselessly alleging that the Georgia gubernatorial election was somehow stolen or illegitimate -- and the losing candidate (who trails by well over 50,000 votes) is apparently mulling a lawsuit to demand a do-over election.  The double standards are glaring.