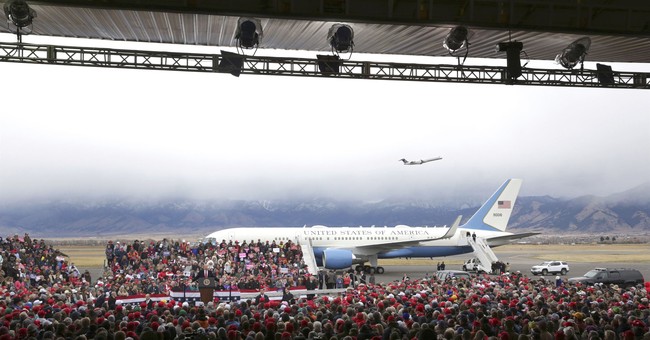 After many months of obsessive poll watching, race-by-race analysis, and examining national trends, election day is finally upon us.  Tomorrow, voters across the country will decide whether or not to reward Democrats with the 'blue wave' they've been seeking since President Trump's upset victory two years ago.  As a 2016 'Never Trumper' and a conservative who remains rather suspicious of Trump, I am supporting the Republican Party in the midterms -- primarily for the following three reasons:

(1) The Economy.  Thanks to GOP policies and leadership, the US economy is humming along.  By now, many of you know the highlights: Unemployment has ebbed to a near-50-year low, boosting the fortunes of Americans across all demographics.  Consumer confidence has spiked to an 18-year peak.  GDP growth is on place to hit or exceed three percent for the year.  Wages and salaries are surging at the strongest clip in a decade, outpacing inflation.  The list goes on.  After President Obama and the Democrats presided over the most tepid American economic recovery since World War II -- following the harrowing 2008 collapse, in which big government policies and experimentation played a large role -- the Trump administration and Republicans in Congress have undertaken a robust project of deregulation and tax reform.  Using the Congressional Review Act and executive power, the GOP has partially cleared away a tangle of Washington red tape and over-regulation, unleashing job creators in the private sector.

They also passed landmark legislation that cut taxes for businesses and families while reforming the byzantine federal tax code.  They achieved this critical accomplishment over the lockstep opposition of every last Democrat in Congress, and in the face of a torrent of misinformation and fear-mongering.  Tax reform has not been the political silver bullet some Republicans may have hoped for, but its popularity is viable, and it's no accident that voters trust the party in power over the opposition on economic issues and taxes.  The Washington Post/ABC News poll we highlighted earlier helps demonstrate widespread economic optimism and satisfaction among the electorate:

On Friday, the Labor Department’s monthly employment report produced a string of positive numbers: another month with the unemployment rate at 3.7 percent, the lowest in half a century; 250,000 jobs added to the workforce; and wages posting the biggest increase in almost a decade and faster than inflation. The Post-ABC News poll was conducted Monday through Thursday, the day before the employment statistics were announced, and records the most optimistic attitudes about the economy in nearly two decades, with 65 percent of all Americans rating the state of the economy as good or excellent and 34 percent offering a negative assessment. The last time optimism ranked so high was in January 2001...Among registered voters, 71 percent say the economy is good or excellent, up from 60 percent in August. Those who give the economy positive ratings favor Republican candidates for the House by 54 to 40 percent, wider than the 49 to 42 percent margin in August.

While I remain deeply frustrated by the lack of seriousness exhibited by both parties on tackling the drivers of our long-term debt (with President Trump recklessly punting on that issue for political reasons) the Democrats have repeatedly shown that they have absolutely no realistic plan to confront this serious challenge.  They offer only class warfare bromides that do not comport with reality.  And as their party shifts left, they're tripling down on their tax-and-spend statism while simultaneously moving rapidly toward embracing a stunningly irresponsible healthcare scheme that would harm our care and require crushing tax increases on all Americans.  Their economic agenda is a mix of cynicism, envy politics, and pure fantasy.  By contrast, in spite of some soft spots and their own contribution to the bipartisan abdication of leadership on long-term debt, Republicans' policies have inspired impressive growth, turning over more power to the hardworking Americans who actually create jobs, and allowing individuals and families to keep more of the money they earn.  In short, this:

?The economy is booming.

?We’re in charge & our policies are working.

?Every single Democrat in Congress voted against the succeeding centerpiece of our economic agenda.

?Then ~every House Democrat voted against making your lower tax rates permanent. https://t.co/gFialWDDEM

(2) Judges.  The dynamic partnership between President Trump and Senate Republicans has resulted in an historic confirmation clip of judicial confirmations, including two Supreme Court justices, over the past two years.  After decades of Democratic overreach, escalations, and power grabs on this front, Senate Majority Leader Mitch McConnell has zeroed in on federal judges as an overwhelming priority, and rightly so.  He's turned Democrats' hardball tactics against them, unapologetically teaming up with the White House to populate the federal judiciary with dozens of new, and relatively young, constitutionalists.  This is a critically important development, cementing a powerful legacy that will far outlast the Trump presidency.  As for Trump, it must be said that he has unequivocally delivered on a central campaign promise that animated many wary conservatives to vote for his campaign.

It is essential that the Trump-McConnell confirmation pipeline remain intact for at least the next two years, and thanks to a favorable Senate map, that's a very real possibility.  Voters in a swath of states -- especially Arizona, Indiana, Florida, Missouri, Montana, Nevada, New Jersey, North Dakota, Tennessee, Texas, and West Virginia -- have a chance to defend, or even expand, the Republican upper chamber majority.  Several major races are extremely close and could tip either way.  The importance of judges, and the stakes of these confirmation fights, was on full display earlier this fall during the Kavanaugh contretemps.  Senate Democrats abandoned any semblance of respect for traditional burden-of-proof standards, mounting a brutal and dirty campaign against the nomination of Justice Brett Kavanaugh.  In a particularly disgraceful display, every member of the Senate Judiciary Committee minority contingent formally seized upon a wildly baseless 'gang rape' smear in order to demand that Kavanaugh withdraw his nomination.  The claim was ludicrous on its face, and has since comprehensively fallen apart.  But Democrats exhibited no caution, eagerly engaging in a shameless, ends-driven partisan pile-on.  That memory must remain fresh as right-oriented voters enter their polling places.

Democrats' willingness to stoop to any low to thwart an influential conservative jurist ought to be instructive.  Leader McConnell told me last month that he believes that if Democrats somehow manage to win back the Senate tomorrow, the flow of judicial confirmations will grind to a complete halt.  I suspect he's right.  Right-leaning voters must therefore work to ensure that this does not occur -- and should, in fact, capitalize on this chance to send McConnell reinforcements and add some extra breathing room on close votes.  On this issue, my sentiments were captured well by a righteously furious Sen. Lindsey Graham during the hearings, articulating sentiments that he's continued to echo in recent weeks:

(3) The prospect of Speaker Pelosi and Majority Leader Schumer.  Even though dozens of Democratic candidates billing themselves as moderates have refused to endorse Nancy Pelosi as Speaker, she remains the favorite to wield the gavel if her party wins back the House.  For more on her behind-the-scenes positioning to maintain the inside track to power, read this piece.  Under the last iteration of Speaker Pelosi, Democrats passed a slew of bad bills, including Obamacare, cap and trade, and hugely wasteful "stimulus" and spending bills.  That party has only galloped further to the lefty fringe in the ensuing years, raising the specter of more damaging legislation that threatens to undo some of the important economic progress achieved by Republicans.  Pelosi is a shameless hypocrite and a cartoonish demagogue who is unworthy of the Speakership.  Down the hall, empowering Chuck Schumer would guarantee extraordinary obstruction for at least two years, paralyzing the generationally-important effort to confirm good judges to key posts.  Recall that when Judiciary Democrats legitimized the outrageous 'gang rape' smear against Justice Kavanaugh, Schumer personally signed onto that egregious effort, as well.

Over the years, the New York Senator has also demonstrated a penchant for camera-addicted showboating and prizing partisan gain over sound governance.  In short, variously persuasive expressions of deep reservations about President Trump notwithstanding (and it looks like a critical mass of voters wanting to place a check on Trump, despite his relatively strong approval numbers, is a Democratic asset this cycle), I will not assist any electoral effort that would increase the power and influence of Nancy Pelosi and Chuck Schumer -- to say nothing of the various ranking Democrats who would control influential committees if Democrats prevail.  One final, related point: In major gubernatorial contests across the country, voters are selecting chief executives for their state.  As believers in state power and federalism, conservatives understand the importance of controlling state-level agendas and budgets -- and redistricting.  Act accordingly.

Amid an unusual and uncertain political landscape, it is unclear how the chips will fall tomorrow night as the returns roll in.  Some signs point to a decisive blue wave; others suggest that Republicans could beat back the conventional wisdom.  Whether the former or latter scenario plays out (or various shades of outcomes in between) depends entirely on turnout.  That's a cliche because it's true.  Nothing is predetermined.  In this country, voters dictate outcomes.  So no matter what the polls say, and no matter what the 'experts' predict, each citizen has the power to shape events by participating in the process.  Vote.