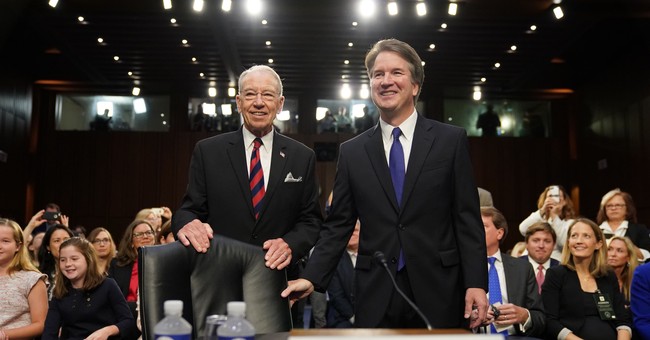 Following a disgracefully hideous confirmation brawl, Judge Brett Kavanaugh has been confirmed by the United States Senate, and will soon be sworn in as the next Associate Justice of the Supreme Court.  All Republicans voted 'aye,' except for Alaska's Lisa Murkowski, who cast a 'present vote' in order to effectively cancel out the absence of a Kavanaugh-supporting colleague who is attending his daughter's wedding.  All Democrats voted nay, except for West Virginia's Joe Manchin, who respected the strong sentiments of his constituents and likely solidified his re-election in the process.  A brutal, draining fight is over.  Justice has prevailed.

I made my closing argument for Kavanaugh last Friday.  If anything, the charges against him only grew weaker and more dubious over the course of the ensuing week.  In my advocacy of a brief FBI probe into the less ludicrous accusations against him -- both of which remain uncorroborated and lacking any verifiable credibility -- I reasoned that such a course of action could help provide some added legitimacy and closure in the eyes of non-hardcore partisans, many of whom have been undecided or ambivalent on the Kavanaugh nomination.  The goal was never to satisfy implacable hacks; it was to mitigate broader public bitterness and suspicion about the process.  At the Weekly Standard, John McCormack makes a strong case that the resulting discrete, limited FBI foray achieved the outcome of helping Kavanaugh's confirmation.

He argues that the probe (a) produced no new incriminating information against the nominee (although it did apparently turn up questionable conduct by Dr. Ford's allies), (b) allowed additional time for the sensational 'gang rape ring' claim to collapse, (c) gave space for Ms. Ramirez's "corroborating" (anonymous hearsay) witness to be refuted, (d) bought time for Dr. Ford's inconsistencies to be thoroughly examined, and (e) let allies slap down various "perjury" attacks. Thanks to the Left's endless, media-aided smears and hyperventilation, there will always be something of a cloud over Kavanaugh in some Americans' minds.  But the FBI's involvement, and the slight prolonging of this process, assisted in dissipating that cloud for many fair-minded people.  One of those people is Sen. Susan Collins, whose lengthy, careful Friday floor speech laid out the reasons why the evidence against Kavanaugh was extremely flimsy (not coming close to meeting her 'preponderance of evidence' standard), and why the presumption of innocence is a bedrock American value:

She delivered her remarks while flanked by two other pro-Kavanaugh female Senators, clearly mindful of the optics.  Her comments explicitly cited the extra Judiciary Committee hearing and FBI probe as steps she found valuable in coming to her ultimate conclusion to favor confirmation.  Contrast Collin's logically-crafted reasoning with the non-sequitur, guilt-by-association emotionalism of Sen. Murkowski, and the 'it doesn't matter what the truth is' cynicism of Democrats like Sen. Booker.  Night and day.  In any case, without an extended period to allow for FBI intervention, I'm not sure Kavanaugh gets the key triumvirate of Collins, Flake and Manchin to cascade in his direction.  It was the right move, substantively and strategically.

Now that Kavanaugh has been approved, I do not feel happiness.  I'm still appalled by everything that just transpired.  I'm fearful about the zero-sum, say-anything nature of our politics.  I'm furious at an activist media that couldn't disguise its rooting interests, evidenced by repeated abandonments of core journalistic practices.  That said, I'm gratified that the Bad Faith Mob lost, that their disgusting tactics were not rewarded, and that reason and evidence carried the day -- albeit frighteningly narrowly.  It's more relief than anything else.  Relief that a grave injustice has been averted.  For those with lingering doubts about Kavanaugh's guilt, and the evidentiary standards applied during this melee, read this thorough, important piece from David French:

This is a superb refutation of the allegations against Kavanaugh from the indispensable @DavidAFrench Important piece. https://t.co/paDQSjr9hX

In reviewing the record, we see time and again the same pattern. Serious accusations are made, conventional wisdom sets in, and then the accusation unravels. The pattern holds with the claims of sexual assault, indecent exposure, and gang rape, and it holds with allegations of perjury. Simply put, the evidence does not support the sexual misconduct claims against Kavanaugh, nor does it support the claims that he lied to defend himself...Like it or not, we have reached the point where tens of millions of Americans simply do not care about the truth. They scorn civility. But we cannot reach the point where evidence no longer matters, only outcomes. We cannot sacrifice a man’s reputation on the altar of politics, no matter how consequential the political dispute. At the same time, however, we cannot simply assume that our political opponents are always, everywhere acting in bad faith. Even if elected Democrats vote in near-lockstep, there are millions of Americans who will genuinely wonder, “Is a sex abuser and/or a perjurer about to ascend to the Supreme Court?”. The evidence is overwhelming that the answer is no. The evidence indicates that Brett Kavanaugh faced false or mistaken claims, responded to those claims with understandable and appropriate emotion, and contested them with truthful testimony.

French doesn't merely assert these things. He shows his work.  I'll leave you with two bitter grouses from Sen. Chuck Schumer, who has occasionally allowed the mask to slip by invoking Merrick Garland.  If the Kavanaugh fight was truly about 'credible' allegations from women, referring back to an unrelated previous judicial skirmish seems like a strange non-sequitur.  But if the Kavanaugh battle was really waged over revenge and ends-justify-the-means politics, the Garland fixation isn't strange at all.  Here's Schumer:

Chuck Schumer: "Let the confirmation process for Judge Kavanaugh be recorded as a sorry epilogue to the brazen theft of Justice Scalia's seat." pic.twitter.com/bQnGjAMVOz

Schumer calls this "the ignominious end"of bipartisan cooperation on SCOTUS nominations. That sounds like a warning.

I'll remind Schumer that in the case of Garland, Mitch McConnell "brazenly" applied Schumer's own standard, as advocated in 2007, echoing the Biden Rule introduced years earlier. And it's downright laughable to suggest that Democrats have been remotely "cooperative" on this front over recent decades.  Read this brief history lesson on how we got to this place, and you'll understand the breadth of Schumer's intellectual dishonesty.  Relatedly, if Schumer hadn't idiotically launched an unprecedented partisan filibuster against Justice Gorsuch, it's unlikely that McConnell would've mustered the votes to invoke the Reid Rule and nuke the filibuster for Kavanaugh, given the controversy.  For years, Schumer and his ilk have engaged in unilateral escalations and overreach.  Now that they're reaping what they've sown, perhaps some of their fury can be best understood through the prism of impotent regret.  They've lost, and they deserve to lose.