Analysis: Trump's Weakness in Helsinki Was a Low Moment of His Presidency 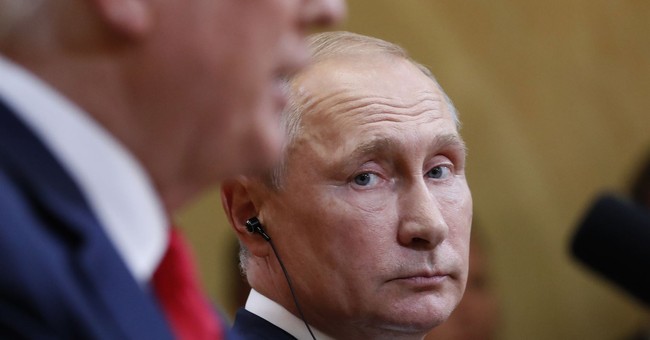 President Trump's pitiful showing at a Helsinki joint press conference with Vladimir Putin on Monday was perhaps the lowest moment of his presidency -- with the possible exception of his inexcusable initial reaction to the racial violence in Charlottesville, Virginia.  Those two stand-out failures are connected by a common thread: The President of the United States indulging in grotesque moral equivalencies, each at least partially driven by his pathological compulsion not to excoriate people who shower him with effusive, if superficial, praise. After Charlottesville, he could have addressed the seriously problematic violence of far-Left agitators without repeating the nonsense that there were many "fine people" on "both sides" of demonstrations like this.  Likewise, he could have flattered and cajoled Russia's president in pursuit of improved relations and an enhanced partnership without effectively amplifying the Kremlin's disinformation campaign regarding their indisputable interference in the 2016 US elections, and without blaming America's "stupidity" and "foolishness" for our long and troubled history with Moscow.

Having "great confidence" in your intelligence team means siding with their unanimous assessment over the forceful, cynical lies of a foreign adversary.  And as we've seen elsewhere lately, attempting to forge a more functional relationship with an adversary must not entail an aspirational whitewash of that adversary's history of conduct -- especially if those actions remain active, and are not in "the past."  Avoiding future treachery and malfeasance requires an honest accounting of, and consequences for, that (very recent) past.  That said, I agree with Trump's defenders that some of the criticisms of his showing in Finland are over the top.  Comparisons to Kristallnacht and invocations of words like "treason" and "traitor" are reckless and overblown.  I'm also not of the mind that Trump was so embarrassingly deferential to Putin because the Russians must have some piece of ugly blackmail they're lording over him.  Such accusations and conjecture are counterproductive and irresponsible.

Occam's Razor suggests that the truth is simpler, and more juvenile: Trump is deeply insecure about any notion of an asterisk next to his election victory, leading to an endless parade of humiliating self-justifications. Beyond that, he admires "strength," likes people who praise him, and dislikes those who don't.  It's that self-absorbed heuristic that often appears to drive his actions and explain his withering attacks on traditional allies and obsequious praise of certain enemies.  He detests the idea that the 2016 election outcome may have come about thanks to any factor beyond his own prowess, so he wrongly conflates unambiguous acknowledgments of Russia's interference with an admission that he colluded, or at least received undue assistance along the way.  (Remember, the Russians activated their machinery not only against Hillary Clinton and the Democrats, but also against Marco Rubio and Ted Cruz in the primaries).

The logical thing for Trump to do would be to affirm the unified conclusion of US intelligence -- including GOP-led intelligence committees on both ends of Capitol Hill -- while publicly admonishing Putin not to mess with us again; indeed, his administration's actual policies and actions have been far stronger than his feeble, obsequious rhetoric, and certainly more forceful than the Obama administration's feeble, obsequious accommodations. He could easily accomplish all of that while maintaining his entirely plausible insistence that there was no collaboration between his campaign and the Russian government.  Really, it's not that difficult:

You can hold all 3 of these as true at same time: Russia hacked & undermined our faith in process/institutions; it’s a big deal & bad; it’s not why Trump won.

Instead, questions about Russian meddling evidently trigger Pavlovian non-sequitur responses in his brain, resulting in rambling word salads about Hillary's email server, and other barely-related issues.  This partial transcript captures one of the worst answers he unfurled, from expressing "confidence in both parties" (i.e. US intelligence and Putin), to his bizarre aside that Hillary wouldn't have been able to delete emails from a private server "so easily" in Russia, to positively citing Putin's "extremely strong and powerful" denial of the fundamental charge:

This surreal stream of consciousness very much looks like it's rooted in assuaging his own ego, rather than serving the interests of the American people.  That's unacceptable.  It's cringe-worthy.  Since his victory over Hillary Clinton, I've stated that my approach to covering and commenting on his administration can be described as "Sometimes Trump."  The phenomenon of "Never Trump" was rendered moot the very moment Pennsylvania was called.  The knee-jerk "Always Trump" chorus is an Obamaesque cult of personality, unmoored to any ideological or moral principles.  Rather than choose between the latter two options, my aim is to call the president's actions and decisions as I see them, for better and worse.  It's why I've lavished praise upon him when he's done well, including last week's Supreme Court selection.  Applauding him, even when the Left hates it, has more than occasionally earned me scorn as an "apologist."  But I'm not an apologist, so I ignore that carping.  By the same token, when I believe he's wrong, I say so, even though that inevitably dredges up complaints that I'm a "hater."  But I'm not a hater, so I disregard that whining, too.

It's through that prism that I offer this criticism of Trump's galling, self-interested weakness standing next to Putin in Scandinavia.  It went worse than I'd feared it might -- and was reportedly much worse than the president's team had been expecting, based on internal planning.  And I'm not alone in that view; a number of pro-Trump figures have also sharply criticized his Helsinki capitulation, from Newt Gingrich, to Maria Bartiromo, to Trish Regan, to Matt Schlapp, to Fox & Friends.  Not to mention scores of Congressional Republicans, many of whom are Trump endorsers.  Yes, an important silver lining in all of this continues to be that the administration's Russia policy -- actions, not words -- is superior to what we heard from the president. But the president's words still matter a great deal, particularly in certain contexts.  And within the context of a major global moment, under the glare of a bright international spotlight, the president failed to defend and stand up for the United States.  There's no excusing that.  I'll leave you with three points: First, some committed Trump acolytes are trotting out the old chestnut that voicing frustration over Trump's limp, servile performance is akin to rooting for war.  We've heard that one before:

“Embrace what POTUS did OR CHOOSE WAR!” is rather reminiscent of the demagogic Ben Rhodesian false choice that conservatives deeply resented not too long ago. Really weak sauce in response to criticism of Trump today.

Second, Mitt Romney's statement on this controversy was spot on.  He correctly and directly called out President Trump, but also took a richly-deserved dig at President Obama (and his legions of media cheerleaders) who ridiculed Romney's clear-eyed understanding of the Russians and Putin during the 2012 election. The key word here is "remains:"

My statement on today's summit in Helsinki. pic.twitter.com/WSxFGDKMau

Finally, a major lefty/media critique of Republicans who publicly object to the Trump-Putin exchange is that they  won't do anything about it.  Here's why that's an ignorant or flawed premise:

All things Russia hates. All done in past year with strong GOP support.https://t.co/Ar5KFpxEYH

Before you go, consider making some time to watch a true professional at work, holding Putin's feet to the fire, face-to-face. The questions are strong, but Putin's callow whataboutism and clumsy, smirking deflections are the real story out of this confrontational interview:

UPDATE - Today's "do over" statement was better than nothing, I suppose, but he should have made himself far clearer yesterday when he was standing next to Putin. And he still equivocated a bit on whether Russia was truly or solely to blame.