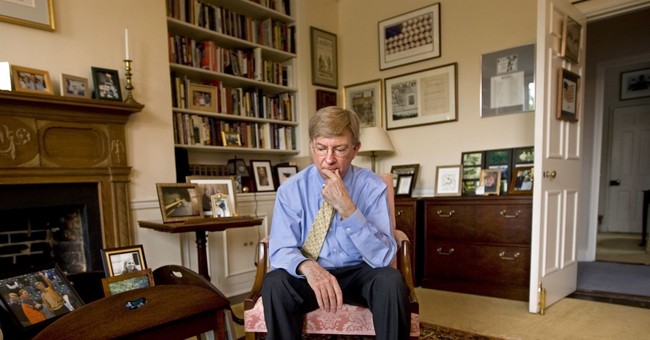 Venerable columnist George F. Will -- whose recent tribute to Charles Krauthammer is essential reading -- is the sort of 'Never Trump' conservative whose unflinching disgust at Trumpism has extended far beyond merely opposing the GOP nominee at the ballot box in 2016.  While others of us who embraced that moniker during the last election have adjusted our approach since his victory, Will and a group of likeminded cohorts have effectively joined the opposition, which is their right.  My path forward has involved a different, more agnostic posture: Supporting and praising the president when warranted, and criticizing him as necessary.  In his Friday column, Will explicitly endorses voting Democratic in November, arguing that the GOP majorities need to be ended in order for the party to be saved -- and insisting that this path to maintaining "the nation's honor:"

The congressional Republican caucuses must be substantially reduced. So substantially that their remnants, reduced to minorities, will be stripped of the Constitution’s Article I powers that they have been too invertebrate to use against the current wielder of Article II powers. They will then have leisure time to wonder why they worked so hard to achieve membership in a legislature whose unexercised muscles have atrophied because of people like them. to vote against his party’s cowering congressional caucuses is to affirm the nation’s honor while quarantining him. A Democratic-controlled Congress would be a basket of deplorables, but there would be enough Republicans to gum up the Senate’s machinery, keeping the institution as peripheral as it has been under their control and asphyxiating mischief from a Democratic House. And to those who say, “But the judges, the judges!” the answer is: Article III institutions are not more important than those of Articles I and II combined.

Liberals cheered Will's exhortation, for obvious reasons, while 'MAGA' conservatives dismissed it as the out-of-touch tantrum -- albeit a characteristically well-crafted one -- of a Trump Derangement Syndrome sufferer.  My reaction was different, due to my reverence for Will and my discomfort with his thesis.  Writing at National Review earlier in the week, Dan McLaughlin (Twitter's @baseballcrank) offered a thoughtful critique of the column from the perspective of an election-era Never Trump conservative:

[Endorsing Democrats to cleanse the GOP] is a profoundly bad idea, and Will makes nearly no effort to consider its actual consequences. There are four main reasons why running Republicans out of Congress will not produce the results that Will is seeking. One, Democrats do not respect the values Will champions and cannot be counted on to advance them. Two, the recent history of divided government shows that it moves policy toward the out-party’s ideology and away from the in-party’s, but it does not actually restrain corruption or abuse of executive power; if anything, it tends to expand them. Three, if voters follow Will’s advice, it will make the Trumpist faction more, rather than less, powerful within the Republican party. Four, Will underestimates the importance of the judiciary and the administrative state and the extent to which Democratic control of Congress would empower them to further erode the constitutional powers of Congress as well as those of the presidency.

McLaughin lays out a lengthy exposition on his first two points, rehearsing recent history to compellingly demonstrate flaws in Will's analysis. His broad-strokes points are that Democrats would not restore reverence for, or fealty to, the institutions Will prizes, and that divided government tends to yank policy outcomes toward the non-presidential party's ideology. On his third point, McLaughlin looks at the map and reasons that an electoral shift to the left would disproportionately thin the ranks of Trump-skeptical Republicans, further cementing the Trumpist grip on the party:

[A GOP wipeout] won’t lead to Trump’s hold on Republicans being weaker — like Obama in 2012 and Clinton in 1996, he’ll be the only game in town. Just look at the map. The Republican party has a bewildering array of factions and ideologies and overlap among the two, although typically the divisions are not as obvious as they have been since 2010, and particularly since 2015. You have your pure Establishment Republicans such as McConnell, your “Reformicon”/Kemp types such as Paul Ryan and Marco Rubio, your tea-party conservative types such as Ted Cruz and the House Freedom Caucus, your moderate and liberal Republicans such as John Kasich, and of course the true-believing Trump enthusiasts. If you look at who the most vulnerable Republican House and Senate members are, you’ll quickly notice that they are dominated by the McConnell, Kasich, and Ryan/Rubio factions, and to some extent the Cruz-style ideological conservatives. Far fewer of the real Trumpist Republicans are really on the chopping block. Wipe out the other factions, the way the Blue Dog Democrats were decimated in 2010, and the Trump faction is suddenly ascendant within the party. Wouldn’t they be chastened by defeat for the party as a whole? If you’ve followed this element of the party at all, you know the answer.

Click through for McLaughlin's rebuttal on the fourth and final point. His conclusion, which accuses Will of "cutting off conservatism's nose to spite its face," is that Will is arguing out of emotion and not rationality: "Most of what the Republican Congress has actually done under Trump — legislation, judges — has been conventional conservative policy. Will is asking conservatives to give that up, surrender the consolation prizes for being stuck with Trump. In exchange, he is offering nothing: just yet another promise that more time in the wilderness will cure everything while the Democrats take the wheel...it is hard to think of a less realistic cure."  I'l leave you with this Twitter exchange between McLaughlin and another Willian conservative:

We've had this argument before. Would be interested if you have a long form take on the 4 objections I raise to Will's position.

Nichols' reply: "I reject the premise of your argument. Or perhaps more accurately, I want different things than you do. I’m not worried about the programmatic issues. This is an issue of constitutional responsibility."  Fair enough, but electing Democrats -- a party that is increasingly and openly hostile to the First and Second amendments -- does not strike me as a viable plan to protect "constitutional responsibility."  Truthfully, I still share much of Will and Nichols' alarm over Trump's affect on conservatism writ large -- especially so when he showcases his unfitness with each fresh spasm of undignified pique or flash of authoritarian impulse.  But McLaughlin's challenges are well-argued and strong.  Despite my intense distaste for candidate Trump, I was never convinced to channel those feelings into a vote for Hillary Clinton, a woman who was ethically and ideologically unacceptable to me.  Arguments that Trump-suspicious conservatives should translate those suspicions into votes for majorities led by the likes of Nancy Pelosi and Chuck Schumer are even less persuasive.  Therefore, on this count, in my book, the score is McLaughlin 1, Will 0.