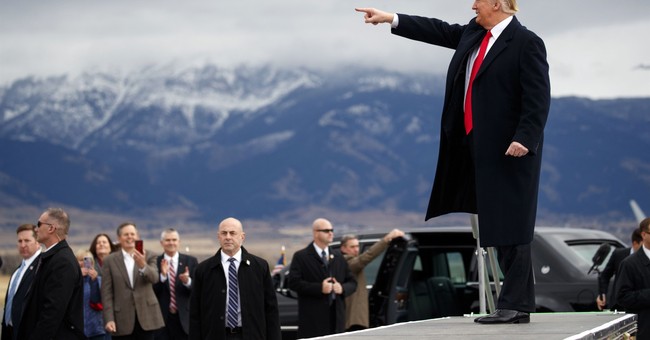 In the final pre-election poll from the Washington Post and ABC News, Democrats hold a seven-point advantage over Republicans on the generic Congressional ballot -- but there are a number of hopeful glimmers for the GOP, too.  The survey also makes clear why Democrats are closing on healthcare, while Republicans are focused on the economy and border security.  Via WaPo's write-up:

The poll finds that registered voters prefer Democratic candidates for the House over Republican candidates by 50 percent to 43 percent. That marks a slight decline from last month, when Democrats led on the generic congressional ballot by 11 points, and a bigger drop from August, when they enjoyed a 14-point advantage. Democrats also have a 51-to- 44 percent advantage among likely voters identified by The Post. That seven-point margin, which is in line with other polls taken in the past two weeks, puts Democrats roughly within range of what they probably will need in the overall national vote for the House to capture a majority from the Republicans, based on calculations from previous midterm campaigns...Among registered voters, Trump’s approval is 44 percent, with disapproval at 52 percent, the best margin among this group during his presidency.

Some interesting notes about the GOP's nine-point lead on handling of the economy:

The Post-ABC News poll was conducted Monday through Thursday, the day before the employment statistics were announced, and records the most optimistic attitudes about the economy in nearly two decades, with 65 percent of all Americans rating the state of the economy as good or excellent and 34 percent offering a negative assessment. The last time optimism ranked so high was in January 2001. Among registered voters, 71 percent say the economy is good or excellent, up from 60 percent in August. Those who give the economy positive ratings favor Republican candidates for the House by 54 to 40 percent...

Republicans held this significant lead before last week's blockbuster jobs report dropped. And, in case you missed it, it really was a blockbuster. I embedded this tweet from a former top economic adviser to Joe Biden in my Friday post, but it bears repeating:

And for anyone who's wondering why President Trump has been emphasizing immigration and border security over the final weeks of the campaign (sometimes in an overly demagogic manner, in my view), look no further than these statistics from the Post's data: "Those who rank immigration as one of the most important issues in the election favor Republicans over Democrats by 12 points when choosing a generic congressional candidate...For those who say border security is one of their top issues, Republicans lead Democrats by 42 points on the House vote."  Republicans lead overall on border security, but trail slightly on the wider issue of immigration.  But among those voters who prioritize immigration, the GOP is up by double digits -- a margin that explodes to blowout margins on the question of which party is more trusted to secure the border.

Finally, and I'll return to this theme later in an upcoming 'closing arguments' post, I'd like to point out that Republicans hold a four-point lead over the opposition on the issue of taxes in this new survey.  It has become an article of faith on the Left that tax reform is unpopular and, in fact, such a loser for Republicans that they aren't running on it.  In reality, the law is (+8) in the latest national Fox News poll (vastly improved over the the dismal numbers measured during the tax debate last year, when Democratic propaganda was pervasive), and the GOP is still more trusted on taxes than the party that has been savaging the law in many millions of dollars'-worth of bogus attacks.  And yes, Republicans are running on it.  I'll leave you with two data points that might -- might -- suggest the party in power is in a better position to hold off a big blue wave tomorrow:

FWIW, here’s @L2political’s breakdown of the early vote based on 19 million voters. pic.twitter.com/FoXMAtZO4v

L2 Data compared that breakdown to the 2010 and 2014 early voting numbers (both big GOP years) and said this: "We went back through our EV data vs. 2014 and 2010 overall turnout data and its almost identical at least based on demographics and consumer data." Big question: Have seniors and whites shifted considerably more Democratic this cycle?  We'll find out very soon.  Vote.