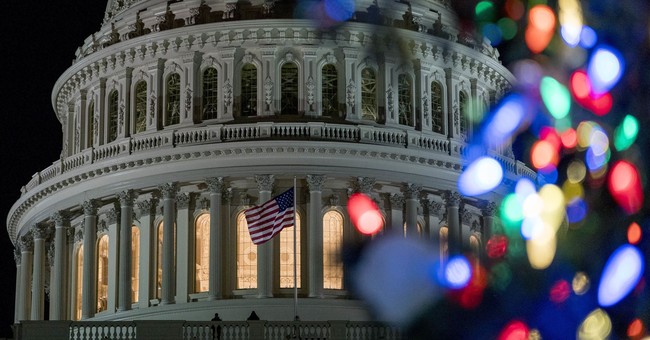 In short, it's happening.  Congress' bicameral conference committee unveiled a compromise tax reform bill on Friday, with votes in each chamber expected this week.  The procedural rules forbid any further amendments, changes or "tweaks" to the now-finalized legislation; the next and last legislative step is a pair of up-or-down votes on an identical bill in the House and Senate (the House will vote tomorrow).  If those votes succeed, the president will sign the bill into law, and Republicans will notch the first major legislative victory of the Trump era.  All indications suggest that both votes will succeed.  The House approved its own version of tax reform in mid-November by a margin of 227-205 -- so even if more Republicans (beyond last round's handful of dissenters) decide to defect this week (doubtful), Speaker Ryan and his leadership team have a fairly healthy cushion on which to rely.  House passage should be a cinch.

The Senate has always been the heavier lift.  The fact that Republicans aren't panicked over the absence of John McCain -- who is at home in Arizona as he battles an aggressive form of cancer -- suggests that Mitch McConnell has the votes, even without McCain.  Let's look at the whip count: Only about five GOP Senators were potential 'nay' votes in the first place.  Republicans hold a 52-48 edge in the upper chamber, meaning that leadership could lose up to two votes and still secure a successful outcome, with Vice President Pence poised to cast a decisive tie-breaking vote, if necessary. Two major pieces fell into place on Friday, as Marco Rubio won his battle to expand the refundable child tax credit in the final bill.  He's now an "enthusiastic yes," with Mike Lee likely to follow.  And Bob Corker, the outgoing Tennessee Senator who was the only Republican member to vote against the Senate-passed bill in early December, has announced his intention to get on board and help make tax reform the law of the land:

See my statement on my support for tax reform legislation: pic.twitter.com/DoeoHLrXWn

Some on the Left are accusing Republicans of literally buying Corker's vote with a provision that would personally enrich him, so party leaders would be wise to address that criticism aggressively ("categorically false," says Orrin Hatch, in a detailed letter).  Meanwhile, occasional X-factors Jeff Flake and Lisa Murkowski appear ready to vote yes, and the conference's most liberal member (Maine's Susan Collins) has laid the groundwork to cast a supportive vote, as well.  In other words, it seems quite plausible that every single GOP Senator will vote in favor of final passage.  Despite McCain's absence and every Democrat opposing the plan, it doesn't look like the Vice President's tie-breaking tally will be required. It's never wise to "count chickens," but as a matter of sound, evidence-based analysis, the likelihood of tax reform becoming law this week is quite high.  And if that does occur, it'll will mark an enormous accomplishment. Here is Politico's summary of the legislation (with loads of additional details here):

[GOP] lawmakers have been willing to accept things that, in the past, would have had them at each other's throats. They're settling for a much higher top individual income tax rate - 37 percent - than many wanted, and their plans to expend the child tax credit would effectively excuse millions of low-income people from paying federal income taxes. The top individual rate, down from the current 39.6 percent, would apply to earnings over $600,000. There would be six other brackets of 10, 12, 22, 24, 32 and 35 percent. Most individual provisions in the bill would expire in 2025, but Republicans say they are confident they will be extended. The hugely popular mortgage interest deduction would be pared back, with a new $750,000 limit on eligible loans, down from $1 million. The child tax credit would double to $2,000, with up to $1,400 being refundable - meaning people could get money back if the credit exceeds what they pay in taxes - thanks to Rubio's efforts.

A long-standing deduction for state and local taxes would be capped at $10,000 for property taxes plus either sales or income taxes. The exemption from the estate tax would be doubled. On the business side, as expected, the corporate rate would fall to 21 percent next year, from the current 35 percent. An Alternative Minimum Tax on corporations would be repealed. Companies would get expanded write-offs for investments and international tax rules would see the biggest rewrite in a half-century. Other provisions would end the Affordable Care Act's mandate to have health insurance, though not until 2019. Republicans dumped a number of controversial proposals, including plans to end a deduction for medical expenses. Calls to tax tuition waivers for graduate students, change accounting rules so that investors have to pay more on stock sales, and a proposal to end private activity bonds all were nixed.

"Republicans say they are confident" that middle class tax cuts will be extended for good reason.  As has been the case for weeks, Democrats are talking about the proposal in ridiculous and apocalyptic terms, with the press dutifully offering up distortionary assists.  In most cases, their misleading or cherry-picked rhetoric simply does not align with reality.  Bernie Sanders calls the bill "a massive attack on the middle class," even though the overwhelming majority of middle class families will see their tax burden reduced.  Dianne Feinstein is lashing out at a provision of the bill that would impact wealthy Californians who will seek to buy million-dollar homes, which doesn't exactly reinforce her party's dishonest fear-mongering directed at the middle class.  And other leftists have lost their minds completely.  It's okay to roll your eyes at some of this nonsense.

In my view, this bill is an imperfect but worthwhile proposal that will lower Americans' tax burdens, on average, across every income group -- with middle income earners benefitting disproportionately.  It will also bring the US corporate tax rate, which is uncompetitive and inefficient internationally, in line with our global competitors.  Nonpartisan analysts agree that the plan will spur stronger GDP growth and create jobs.  Disagreement arises over how robust the resulting growth will be, which also impacts deficit projections (it's virtually certain that the tax cuts will grow deficits by hundreds of billions of dollars over ten years, but the exact scope of those increases are in dispute).  Writing at US News, economist Brian Riedl notes that (a) in spite of opponents' supercharged rhetoric, the bill doesn't uproot the existing tax system, and (b) Democrats' demagoguery against corporate tax cuts and other measures very much looks like opportunistic hypocrisy:

These reforms are not particularly bold. They do not replace the current tax code with a flat tax or national sales tax. They do not eliminate the major tax preferences for employer-provided health care, retirement saving, charitable giving or mortgage interest (the last one may be slightly reduced). They do not undo the tax progressivity that Democratic lawmakers have spent decades building. Critics have slammed the corporate tax cuts. However, even Barack Obama and Bill Clinton have called for lower corporate tax rates in order to compete globally. Since 2000, 33 of the 35 OECD countries have cut their corporate tax rates from an average of 32 percent to 24 percent. The only exceptions have been Chile (which already had a low rate), and the United States, which stubbornly clings to its exorbitant 39 percent combined rate. Senate Finance Committee ranking Democrat Ron Wyden of Oregon has led the fight against the Republican corporate and estate tax cuts. Yet he proposed legislation cutting corporate taxes by hundreds of billions of dollars earlier this decade. And while Wyden now says that "repealing the estate tax abandons progressivity," last decade he told voters that "The estate tax is anti-worker, anti-environment, and anti-Oregon, and it is time for it to go."

I have no doubt that Democrats would have designed their ideal tax overhaul very differently, but voters threw them out of power.  They had big bites at the policy apple for eight years, and they prioritized a wasteful "stimulus," a failing healthcare scheme, and a nuclear giveaway to Iran (which looks worse every day).  Their panicked warnings about the GOP tax bill are designed to stoke fear and opposition, efforts that have largely succeeded.  But at some point, reality will intervene, and the vast majority of taxpayers will recognize that their taxes have gone down, and that they've been lied to.  A median-income family of four stands to receive a tax cut of just over $2,000 in year one alone.  On that point, feel free to give this a whirl:

Setting aside genuine policy disagreements between the two parties, I do suspect that part of the hysteria here is motivated by naked partisan anger that Republicans are on the precipice of getting a big win.  As far as the GOP agenda goes, this tax reform bill is packed with political victories, especially in the context of other achievements:

If this bill passes, Trump-GOP will have:

This is not a trivial agenda.

I don’t think people appreciate how important this tax bill is. IF it passes, GOP can say they (a) passed tax reform, (b) repealed individual mandate, (c) confirmed Gorsuch AND a ton of fed judges, & (d) got rid of job-killing regulations. On paper, that’s not a bad 2017 agenda.

The Day the Electricity Died
Townhall
WaPo BREAKING big story about maker of rifle used in Uvalde donating to Republicans *GASP* does NOT go well
Twitchy
It's Finally Happened: A Call Rings Out for Bill Maher to Be Fired
Redstate
Why the Heck Did Amber Heard's Legal Team Call Her Back to the Stand?
PJ Media