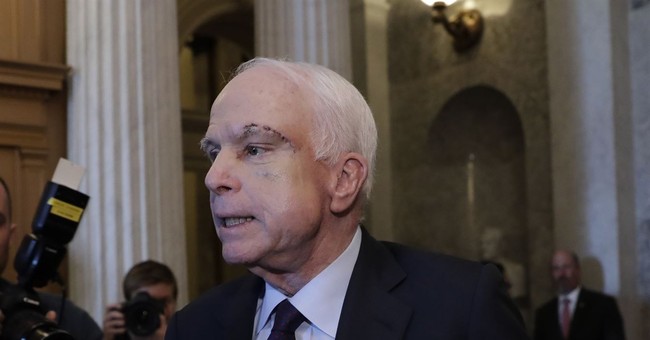 Sen. John McCain (R-AZ) returned to his home state on Sunday to spend time with his family and recover from chemotherapy treatment after spending the past week in a Maryland hospital. McCain, whose  aggressive brain cancer has worsened over the past few months, will miss the senate GOP tax reform bill vote this Tuesday.

However, his absence mostly likely will not prevent the GOP from passing the bill. President Trump addressed reporters Sunday saying that McCain will return to DC if needed.

More on McCain: Pres says "he's going through a very tough time ... but he’ll come back if we need his vote." pic.twitter.com/XDrxRepAlE

According to CBS News, John McCain’s son-in-law said the Senator is doing well.

"I'm happy to say that he's doing well. The truth is that as anyone knows whose family has battled cancer or any significant disease that oftentimes there are side effects of treatment that you have. The senator has been through a round of chemo and he was hospitalized this week at Walter Reed," said Ben Domenech, a conservative writer and husband of Meghan McCain.

The Senator's daughter thanked the public for their support and encouraged cancer research donations.

Thank you to everyone for their kind words. My father is doing well and we are all looking forward to spending Christmas together in Arizona. If you’re feeling charitable this Christmas @HeadfortheCure or @NBTStweets to help find a cure for brain cancer is what I recommend. ??

Sen. McCain announced in July that he had a glioblastoma, an aggressive brain tumor, after doctor's discovered it while removing of a blood clot.