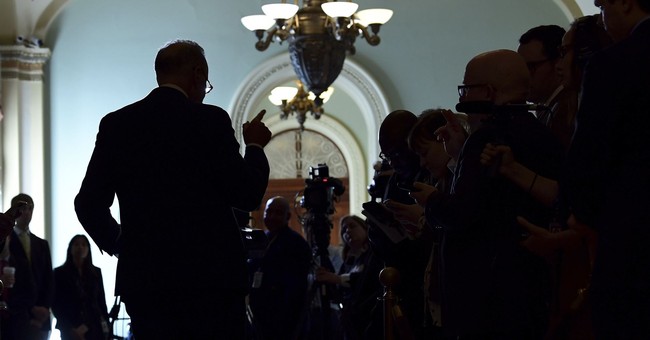 Have you heard that the Republican tax reform proposal is a sweetheart deal for "the rich," and doesn't help middle class Americans?  Yes, you have.  Liberals keep repeating it, and we keep debunking it -- over and over again.  These claims largely stem from some combination of (a) ignorance of the facts, (b) a misleading focus on raw dollars versus percentages (of course wealthy taxpayers will receive more relief in terms of sheer dollars, as they shoulder -- by far -- the highest proportional and actual tax burden of any income cohort, and (c) cherry-picked data points from a distant, hypothetical and unlikely future in which Congress chooses to allow a giant tax hike on the middle class.  In reality, the overwhelming majority of all middle class households will receive a tax cut under the GOP plan, and the rich don't receive a disproportional benefit.  Indeed, at the request of President Trump, House Republicans wrote their bill to exclude an income rate cut for the "millionaires and billionaires" Democrats so love to invoke.  But that didn't stop the Washington Post from once again claiming in a front page story that the Republican-crafted legislation had veered away from middle income earners in favor of the rich.  The CATO Institute's Chris Edwards swooped in with a detailed fact check, starting with a description of WaPo's false premise:

News stories are portraying the Republican tax bills as favoring the rich, even though the opposite is true. The GOP cuts would make the tax code more progressive, and the largest percentage cuts would go to middle-income households. The Washington Post pushed another faulty narrative yesterday. The three layers of headlines on the hardcopy front page were, “Trump’s tax vow taking a U-turn—focus shifted away from middle class—GOP plan evolved into a windfall for the wealthy.” The story’s theme was that Trump originally promised middle-class tax cuts, but House and Senate tax bills have morphed into an orgy of tax cuts for corporations and rich people. Ridiculous.

Why "ridiculous"? Well, because the facts say so:

Rather than a “windfall for the wealthy” as the Post claims, the GOP bills would provide larger percentage cuts for middle earners than higher earners (see here and here). The GOP may abandon cutting the top individual tax rate at all. Much of the cuts for high earners are allocated corporate tax cuts, but economists disagree about who those cuts would actually benefit. Furthermore, the GOP tax bills would increase spending subsidies (refundable credits) for people at the bottom who do not pay any individual income taxes. Look at this TPC analysis of the Senate bill. It shows the bottom two quintiles receiving tax “cuts” in 2019 and 2025, yet those groups do not currently pay any income taxes on net...The following chart shows the TPC data in context. First, note the enormous share of federal taxes paid by the top quintile under current law. The chart includes all federal taxes—income, payroll, estate, and excise for 2019. Now observe that the top quintile would receive a smaller share of the Senate tax cut than their tax share under current law. For the three middle quintiles, it is the opposite. That means that the Senate tax cut would make the federal tax code more progressive. If the Senate tax cut is enacted, higher earners would pay a larger share of the overall federal tax burden.

Edwards' analysis laments the fact that the GOP plan is too progressive and therefore insufficiently pro-growth, but despite those frustrations, he cannot abide supposedly objective journalists furnishing readers with the opposite of the truth.  Here is the chart he mentions:

Notice that the top 20 percent pay close to 70 percent of all federal taxes (blue bars), but would receive just over 60 percent of the tax cut (red bars) under the Senate bill.  For the bottom quintile -- who barely pay any federal taxes to begin with -- their share of the cuts would be (slightly) disproportionately small (which is not the same as a tax increase, mind you).  As for the middle income earners in quintiles two, three and four?  They all get disproportionately large tax cuts, on average, compared to their share of federal taxes paid.  As Edwards writes, this is precisely the opposite of what the Washington Post told its readers.  The data above, incidentally, comes from the left-leaning Tax Policy Center; other nonpartisan groups have offered even rosier projections about the GOP's plans, across an array of metrics.  When a Twitter skirmish broke out over WaPo's conclusions yesterday, the Manhattan Institute's Brian Riedl (whose work I cited in this post) further underscored Edwards' correct argument:

--Bottom 80% of families currently pay 33% of all combined federal taxes, yet would get 37% of the tax cuts.

Might the Post's in-house fact-checker care to assign some Pinocchios to their own paper's misleading headline and reporting?  As for the Bernie-championed line that by 2027 the Senate bill would hand 62 percent of that year's tax cuts to the top one percent of wage earners, I'm sure you'll be shocked to learn that's also a garbage stat.  Here's why.  For those interested, the first session of the House/Senate conference committee -- whose task of merging the two chambers' bills into one piece of legislation is challenging but feasible -- kicks off tomorrow afternoon, and will air live on C-SPAN.