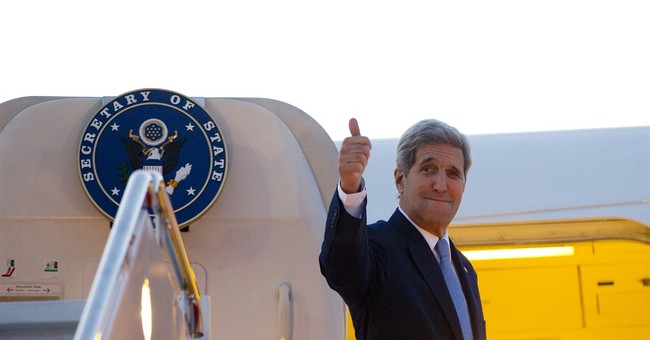 Just a friendly reminder on Obama's big day that the White House and its enablers couldn't care less about what the American people, or a majority of their representatives, think.  And hey, what's not to like? Quite a lot, actually, as we've chronicled week after week. This is a terrible deal, and the American people know it. They were very much open to the prospect a better deal, but they've rejected the reckless mess negotiated by Team Smart Power. Which brings us to the latest Q-poll results: 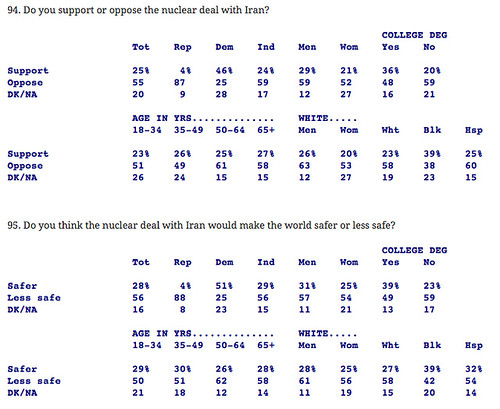 This represents a slight erosion from Quinnipiac's previous survey on this question, and reflects data trends from a host of additional national polls. Despite the dramatic turn in public opinion, Democrats are lining up to protect Obama's legacy. As I wrote on Monday, opponents of the deal have been admitting what we now know for certain: They won't have the votes to overturn a presidential veto. At this point, they're hoping to defeat Harry Reid's planned filibuster -- which would deny Congress the ability to debate and vote on a hugely consequential accord struck with a sworn American enemy.  Scandal-plagued presidential candidate Hillary Clinton, who is a chief architect of the Obama foreign policy, will formally endorse the deal in a speech next week; she's evidently unconcerned about these numbers:


Dozens of Democrats are refusing to go along with the partisan program, including (disgraced former judge) Alcee Hastings. The Florida Congressman lit into the deal in a speech this week, arguing that US interests would be better served by providing bunker-busting bombs to the Israelis:

If I was at table, what would I have led with. What I would have led with is, ‘ you need to give me good faith gesture now, and that is, release the three hostages,” adding that “when the Iran deal commenced, the world found out that Iran had the capability of building 1 to 10 nuclear weapons in a 2 to 3 month span. What in the hell is going to make us they aren’t going to cheat again?” … The president recently said that the people that supported the Iraq war are the same people that are in alliance with the Ayatollah and his functionaries, he did not say it that way, but you get my drift. I did not vote for the Iraq war Mr. President, and I am going to vote against your Iranian deal!


Hastings, like Sen. Bob Menendez, tears at the core of the White House's "warmonger" smear by noting that he voted against the Iraq war. As for the suggestion that the US help Israel destroy Iran's nuclear infrastructure, that course of action appears to be explicitly barred under Obama's agreement:

The United States and other world powers will help to teach Iran how to thwart and detect threats to its nuclear program, according to the parameters of a deal reached Tuesday to rein in Iran’s contested nuclear program. Under the terms of a deal that provides Iran billions of dollars in sanctions relief, Iran and global powers will cooperate to help teach Iran how to manage its nuclear infrastructure, which will largely remain in tact under the deal…This will include “training courses and workshops to strengthen Iran’s ability to prevent, protect and respond to nuclear security threats to nuclear facilities and systems as well as to enable effective and sustainable nuclear security and physical protection systems,” according to the text.


I'll leave you with the Executive Director of 'Vets Against the Deal' making the case against the agreement, which has attracted opposition from dozens of former US military officers:


The Iranian regime is directly responsible for the murders of hundreds of American soldiers in Iraq. "Death to America" isn't just an empty slogan to Obama's new "peace partners" in Tehran.