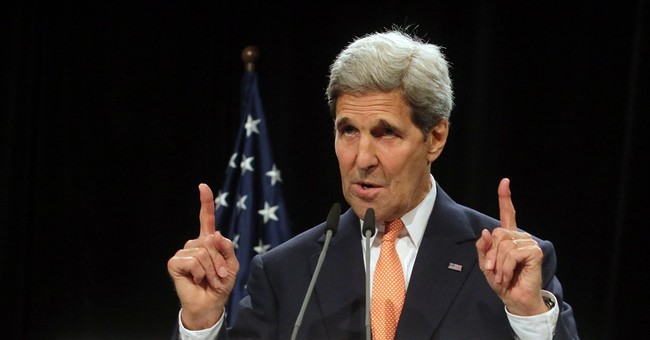 Team Smart Power claims the Iran deal, which they're railroading through the UN as a potentially unconstitutional means of short-circuiting Congress, offers a robust regime of inspections -- even as the Obama administration has embarrassingly retreated from its previous "anytime, anywhere" rhetoric. Critics say the built-in delay period of up to 24 days between requested inspections and final access offers Iran innumerable opportunities to cheat, as is their perennial wont. Nuclear officials with special expertise in dealing with the Iranian regime are siding with opponents of the agreement on this crucial point, the New York Times reports:

The Obama administration’s claim that the Iran nuclear accord provides for airtight verification procedures is coming under challenge from nuclear experts with long experience in monitoring Tehran’s program. Energy Secretary Ernest J. Moniz has insisted that Iran would not be able to hide traces of illicit nuclear work before inspectors gained access to a suspicious site. But several experts, including a former high-ranking official at the International Atomic Energy Agency, said a provision that gives Iran up to 24 days to grant access to inspectors might enable it to escape detection. Olli Heinonen, a former deputy director of the agency, said in an interview that while “it is clear that a facility of sizable scale cannot simply be erased in three weeks’ time without leaving traces,” the more likely risk is that the Iranians would pursue smaller-scale but still important nuclear work, such as manufacturing uranium components for a nuclear weapon. “A 24-day adjudicated timeline reduces detection probabilities exactly where the system is weakest: detecting undeclared facilities and materials,” he said. David Albright, the president of the Institute for Science and International Security and a former weapons inspector in Iraq, also said that three weeks might be ample time for the Iranians to dispose of the evidence of prohibited nuclear work. Among the possibilities, he said, were experiments with high explosives that could be used to trigger a nuclear weapon, or the construction of a small plant to make centrifuges. “If it is on a small scale, they may be able to clear it out in 24 days,” Mr. Albright said in a telephone interview. “They are practiced at cheating. You can’t count on them to make a mistake.”


Indeed they are.  But as many observers have already noted, the Iran deal is so astonishingly generous to Tehran that they may be tempted not to cheat, if only to preserve what the agreement affords them:  A fully intact nuclear program with automatically sunsetting restrictions that will all but guarantee status as an internationally-blessed threshold nuclear state within 10-15 years.  Plus, it now appears that there are additional secret giveaways buried within the accord, to which Congress won't have access.  The State Department won't deny the existence of these hidden agreements:


One of the provisions of the Corker-Cardin review bill, which I've defended, is that it requires the administration to submit every single letter of the finalized accord to Capitol Hill for review.  If special, unreviewable wink-and-nod side deals exist -- and the dodge-fest above suggests they do -- that's just another reason for Congress to torpedo this disaster.  Not to mention reports of Iran's foreign minister bragging that the regime has "secured its right to deny access to its sites for nuclear inspection and to ballistic missiles as part of a deal concluded with six world powers," in addition to Khamenei's latest "disturbing" anti-American rhetoric, and top officials' vow to use Iran's sanctions relief windfall to fund terrorism.  A new Pew poll shows public support for this agreement underwater by ten points among Americans who've heard anything at all about the issue.  A majority says they're not confident the West will be able to fully monitor Iran's activities, and a huge majority doesn't trust Iran to abide by the terms.  That cynicism is shared by the nuclear experts quotes in the Times above.  I'll leave you with this minor detail about a high-ranking Al Qaeda commander who was killed in a US strike in Syria earlier this month.  Ta da: