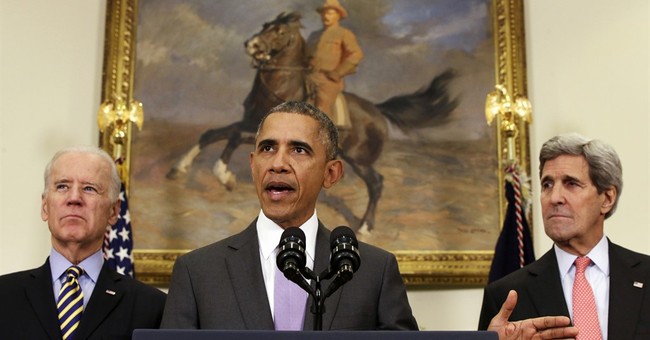 Public opinion on a prospective Iran deal was generally positive, if skeptical, while talks were still underway. Since the details of the agreement were unveiled, however, three consecutive national polls have shown most Americans turning against the Obama administration's terrible deal with the terroristic, anti-American regime in Tehran. Initial reviews were slightly negative, with a plurality rejecting the accord in a Pew survey, followed by bare majority opposition in a CNN poll. After several weeks of intense salesmanship by the White House and its allies -- characterizing critics as bad-faith, talking points-driven fear-mongers -- public support for the nuclear agreement has cratered:

American voters oppose 57 - 28 percent, with only lukewarm support from Democrats and overwhelming opposition for Republicans and independent voters, the nuclear pact negotiated with Iran, according to a Quinnipiac University national poll released today. Voters say 58 - 30 percent the nuclear pact will make the world less safe, the independent Quinnipiac University Poll finds. Opposing the Iran deal are Republicans 86 - 3 percent and independent voters 55 - 29 percent, while Democrats support it 52 - 32 percent. There is little gender gap as men oppose the deal 59 - 30 percent and women oppose it 56 - 27 percent.


Americans' approval of President Obama's job performance on foreign policy is deep underwater (39/55), and even worse on Iran specifically (35/56). Obama and his team have been all over the media arguing that the accord they've championed is both a good deal for America, and will make the world a safer place. Voters have accepted neither argument. The president has claimed, dubiously, that "99 percent" of the world supports the deal, to which an overwhelming majority of Americans have effectively responded, "count us out."  By a two-to-one margin, the public says this nuclear agreement will make the world less safe -- which is almost certainly true.  This deal leaves Iran's nuclear infrastructure fully intact, conferring international legitimacy upon the program for the first time.  It does not force Iran to shut down a single nuclear facility, including a previously-secret bunker built inside a mountain, in violation of numerous international embargoes and laws.  Its restrictions automatically begin to expire after just one decade, permitting Iran to continue research and development on advanced centrifuges throughout.  It pours tens of billions into the regime's coffers, allowing them to step up their direct aid to international terrorists. It eases restrictions on Iran's ability to purchase banned weapons, and lifts sanctions on their illicit ballistic missile program.  Its inspections regime is weak; a far cry from the "anytime, anywhere" standard the White House repeatedly described.  And it does not require Iran to improve its malignant conduct vis-a-vis terrorism sponsorship, regional meddling, or human rights.  By Obama's own admission, Iran will emerge from this deal much richer, and on the brink of virtually immediate nuclearized status once the limitations sunset -- even if they don't cheat, which they always, always do.  Feeling safer yet?

The new poll, released yesterday, drops with a thud on Washington, DC, where fence-sitting Democrats are determining whether to cross the White House on a disapproval vote following the August recess.  One important House Democrat cast his lot with Obama on Monday, amidst reports that the influential Sen. Chuck Schumer may be leaning "no."  Ugly, crooked numbers like the ones published my Quinnipiac cannot be  encouraging to undecided Democrats, who no doubt have noticed the utter failure of the administration to sell Americans on its priorities.  A few final notes from the expanded Q-poll:

(1) A majority of Americans continue to oppose Obamacare, with a narrow plurality still encouraging Congress to repeal the unpopular, failing law.

(2) A majority of respondents disapprove of Obama's overall job performance, with fully 73 percent of voters expressing dissatisfaction over the direction of the country.

(3) Congressional Republicans' job approval rating is lower than either Obama's or Congressional Democrats', fueled by the phenomenon of GOP voters being far more critical of their own party than Democrats.  And yet:>

I'll leave you with John Kerry pretty much conceding that the administration refused to submit this international treaty to Congress as such...because they knew they didn't have the votes. "Physically impossible," via Ed Morrissey: