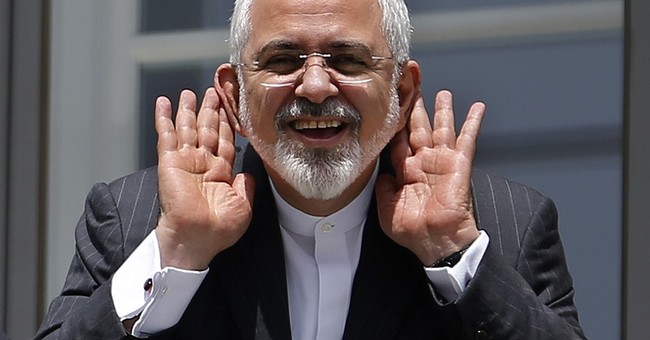 The just-announced Iran deal confirms critics' worst fears: It hands an epic victory -- replete with twelve figures in sanctions relief -- to an outlaw, anti-American regime, it confers the West's blessing upon Iran's nuclear program, and it crosses numerous so-called "red lines" in doing so. The accord leaves Iran's vast nuclear infrastructure virtually entirely intact. Its restrictions automatically begin to phase out after a decade. It (almost immediately) pumps more than $100 billion into the regime's economy, providing Tehran with desperately-needed resources to step up its habitual terrorism abetment and toxic regional meddling. It eschews the sort of solid  anytime/anywhere snap inspections regime proponents of the deal promised repeatedly. It permits Iran to maintain its infamous underground nuclear facility -- long seen as an emblem of Iranian lawlessness and non-compliance. It allows Tehran to press forward with research and development on advanced-level centrifuges. Astonishingly, it caves to Iran's preposterous 11th-hour demands by accommodating the lifting of both the UN arms embargo and sanctions against the regime's illegal ballistic missile program -- issues that were allegedly off the table for Western negotiators. (Similarly, Iran's uniquely pernicious support for terrorism, ongoing illegal detainment of multiple US citizens, and genocidal hostility to Israel were also untouchable -- while apparently nothing was off-limits for Iran's delegation). It guarantees that even if Iran were to abandon its incurable habit of cheating and lying by fully complying with the agreement, the country would emerge as a threshold nuclear-armed state in just over a decade.  If and when Iran does cheat, the mechanisms for reinstating global sanctions are fraught with pitfalls.  This bell cannot be un-rung. It fails to significantly lengthen Iran's "breakout" horizon, according to experts, undermining Obama's last remaining fig leaf.  And it touches off an arms race in the world's most volatile and dangerous neighborhood. In short, it is disastrous for the United States and global security.

When the Obama administration claimed that no deal was preferable to a bad deal, they weren't telling the truth. Striking an accord, no matter how reckless and lopsided the terms, has been an obsession rooted in myopic naivety and selfish legacy-building.  At the onset of these negotiations -- brought on by tough sanctions that were opposed by Obama (again, instincts) -- the stated goal was to slowly diminish sanctions against Tehran, in exchange for the systematic dismantling of its nuclear program. This process would be overseen by comprehensively robust inspections, we were told. There would be no right to enrich. At the talks' conclusion, Iran achieves immense, front-heavy sanctions relief, in exchange for… promising to press a "pause" button on their nuclear program. The very same program that somehow increased its stockpile during the interim "halt," throughout which the Obama administration offered one excuse after another to paper over the regime's non-compliance.  Iran's president summarized the state of play rather bluntly this week: "The international community is removing the sanctions, and Iran is keeping its nuclear program." Here's Benjamin Netayahu torching the agreement as a "stunning historic mistake:"


He's been right every step of the way on these matters, much to the Obama administration's petulant chagrin.  Congress will now review the details of the deal and vote up or down.  If they vote to disapprove of the deal, as expected, Obama has vowed to veto their disapproval, forcing Congress to muster two-thirds majorities to override him.  Large bipartisan majorities are likely to vote against the plan, but Democrats will likely furnish enough votes to sustain the presidential veto.  This dynamic exists because Obama refuses to submit this deal, which is intended to bind future Congresses and presidents, as a treaty.  Over the coming weeks, the White House will attack Republicans (in an effort to distract the media from the bipartisan nature of opposition), demand that people ignore how far the goalposts have shifted, and paint critics as warmongering zealots.  This White House takes a much tougher line with domestic critics than it does with fanatical theocrats who chant "death to America."  The grave consequences of this abject capitulation will likely take shape slowly, then explode in future years, long after Team Smart Power has receded from the scene.  Self-righteous, tendentious, demagogic self-congratulation today; someone else's problem tomorrow.  I'll leave you with this snide but frightening point, followed by Democrats throwing serious shade at the deal: