Senate Dem Slams Deal: 'If Iran is to Acquire a Nuclear Bomb, It Will Not Have My Name On It' 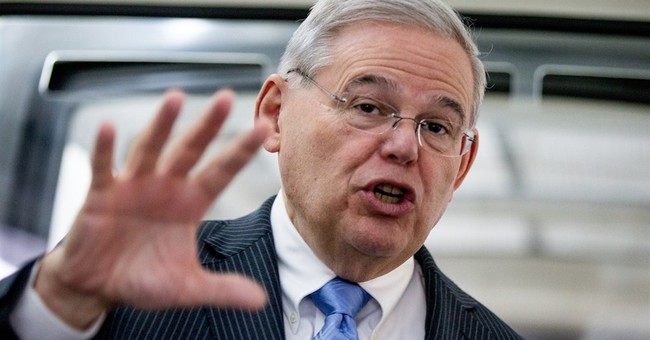 If you've been following Menendez's statements about the Iran deal over the last few months, this outcome was inevitable. And now it's official: The former Senate Foreign Relations Committee Chairman is a firm "no" on the White House's nuclear agreement with the regime in Tehran and would vote to override an Obama veto if and when it comes to that.

Here's Menendez's speech yesterday, in which he elucidates his reasoning and goes out of his way to note that he feels duty-bound to resist the politically-expedient path -- just as he did in voting against the Iraq War:

In addition his puncturing of Obama's 'hope-based' foreign policy, the New Jersey Senator's Iraq War comparison is cutting and savvy.  It reminds his lefty critics that he cast a tough vote against Bush at a time when people like John Kerry and Hillary Clinton wouldn't or couldn't, and it undercuts a cynical attack line from the Obama administration and its allies:

Notable that Menendez voted against the Iraq war, contra Schumer. WH talking pt against Schumer was that he was a war-mongering hawk.


Again, this criticism is quite rich coming from an administration whose two Secretaries of State both voted the nation into war in Iraq, but cognitive dissonance and political necessity allows them to justify using every rhetorical cudgel at their disposal to minimize the number of Democratic defections.  Here's a snarky observation that underscores and undermines another insidious method by which the Left has tried to marginalize opponents of this terrible accord:

Anyone know what synagogue Menendez attends?


As Noah Pollak points out, Obama's absurd contention that critics of the deal are just spewing substance-free "talking points" has been exploded by fellow Democrats Chuck Schumer and Menendez, each of whom has offered lengthy, detailed explanations of their decisions.  In addition to attacking the agreement on the merits, Menendez goes out of his way to take a buzzsaw to various pieces of the White House's alarmist message.  He rejects the "binary choice between the agreement or war," and assails the notion that the legislative branch cannot upend or force changes to a multilateral treaties:  "Over history, Congress has rejected outright or demanded changes to more than 200 treaties and international agreements, including 80 that were multilateral."  As for the argument that America's refusal to participate adopt the agreement wouldn't have much of an impact because other signatories would lift their anti-Iran sanctions anyway, Menendez pushes back: "Our P5+1 partners will still be worried about Iran's nuclear weapons desires and their capability to achieve it. They, and the businesses from their countries and elsewhere will truly care more about their ability to do business in a US economy of $17 trillion than an Iranian economy of $415 billion." In other words, the Obama administration has squandered the United States' massive leverage in negotiating a bad deal, to which they now argue America is held hostage.  President Obama likes to say that "99 percent" of the world favors the Iran nuclear agreement, which is a ludicrous assertion.  Here's another close US ally that doesn't appear to be on board:

Canada will not be lifting its sanctions against Iran. http://t.co/QT82rRtV6W #IranDeal