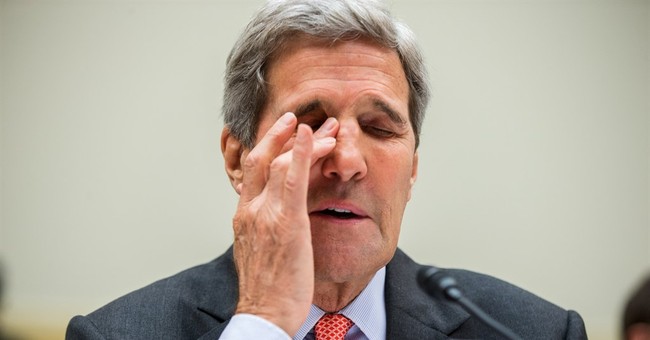 A tough, focused, relentless cross-examination of the Secretary of State by freshman Sen. Tom Cotton -- an Iraq war veteran and a graduate of Harvard Law School.  Watch the whole thing:


Cotton makes the most of his frustratingly limited time, zeroing in on a handful of key points:

(1) Cotton makes clear that the Corker/Cardin legislation, which was signed into law by President Obama, requires that Congress receive every single word of the finalized Iran deal. Having discovered and confirmed the existence of secret side agreements within the overall accord, Cotton wonders whether or how the administration will adhere to that provision of the law. Kerry responds that such matters must be classified in order to respect the privacy of the IAEA.  Cotton's framing is outstanding: "The Ayatollahs will know what they agreed to, but not the American people."  Brutal.

(2) The Arkansas Senator drills down on reports that Iran may be permitted to provide its own soil samples as part of an important nuclear "inspection," likening this alleged concession to allowing an athlete to submit a urine sample for a drug test without supervision. Kerry says that the US government is "satisfied" that this arrangement -- which he'll neither confirm nor deny -- will "provide the answers we need." The Associated Press quoted a nuclear expert casting doubt on that claim yesterday, arguing that the process in question may not prevent Iran from tampering with the sample they turn over.

(3) With Gen. Dempsey's help, Cotton demonstrates that Iran is chiefly responsible for providing specialized IEDs to terrorist insurgents in Iraq, who have used the deadly devices to kill hundreds of American soldiers.  Cotton's point is obvious: This is a regime with a great deal of American blood on its hands and whose leaders still chant "death to America." This deal rewards those very people with a huge cash injection that can and will be used to promulgate terrorism.  The agreement does not require Iran to cease or even diminish its terrorist activities, regional meddling, and human rights abuses.  Kerry serves up a word salad about pressuring Iran on these other fronts in the future, and notes that American sanctions won't be lifted against certain American-murdering criminals within the regime.  But other Western sanctions are lifted against those individuals as part of the deal, to which the Obama administration has agreed.  Kerry's distinction is meaningless.

The ground Cotton powerfully covers over his seven minutes merely scratches the surface of the Iran deal's irreparable flaws.  The accord is opposed by a majority of Americans.


Editor's note: A version of this item is cross-posted at HotAir.com