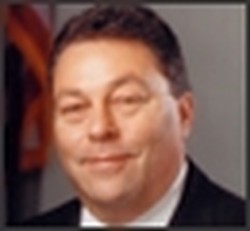 Tony Blankley, a conservative author and commentator who served as press secretary to Newt Gingrich during the 1990s, when Republicans took control of Congress, died Sunday January 8, 2012. He was 63.

Blankley, who had been suffering from stomach cancer, died Saturday night at Sibley Memorial Hospital in Washington, his wife, Lynda Davis, said Sunday.

In his long career as a political operative and pundit, his most visible role was as a spokesman for and adviser to Gingrich from 1990 to 1997. Gingrich became House Speaker when Republicans took control of the U.S. House of Representatives following the 1994 midterm elections.

Earlier, Blankley spent six years in the Reagan administration in a variety of positions, including speechwriter and senior policy analyst.

From 2002 to 2007, he served as editorial page editor of The Washington Times. In recent years, he also wrote a syndicated newspaper column and provided political commentary for CNN, NBC and NPR. He was also a regular panelist on "The McLaughlin Group."

He was the author of two books and a visiting senior fellow in national security communications at the Heritage Foundation.

Born in London, Blankley moved to California with his parents as a child and became a naturalized American citizen. He worked as a child actor in the 1950s, appearing in such TV shows as "Lassie" and "Highway Patrol" and playing Rod Steiger's son in the movie "The Harder They Fall."

Before entering politics, he spent 10 years as a prosecutor with the California attorney general's office.

Blankley and Davis lived in Great Falls, Va. In addition to Davis, he is survived by three children.

Working for the most renowned Speaker in decades, Blankley became one of the leading spokesmen for the Contract with America. Prior to Tony Blankley's career on Capitol Hill, Blankley served President Reagan as a speechwriter and senior policy analyst.

The same depth of knowledge and sharp wit that kept reporters turning to Tony Blankley during his time on Capitol Hill have made Blankley one of today’s leading media commentators. Tony Blankley's opinions and analysis of political events have been featured on the front pages of The New York Times, USA Today, and other major publications, and Tony Blankley was a syndicated columnist for the Los Angeles Times Syndicate.

Blankley has quickly become a favorite speaker of corporate and association audiences around the country. Tony Blankley uses his background in both the executive and congressional branches to design speeches which provide insight into today’s headlines, and the issues that will fill tomorrow’s.

In addition to being a popular speaker, Blankley is an accomplished debater. Clients have paired him with the likes of Bill Press and Bob Beckel, among other noted Democratic pundits, to create a uniquely informative and provocative program. Whether delivering a keynote or debating, Blankley gives his audience more than just analysis. Focusing on the personalities and stories which make politics interesting, Tony Blankley helps audiences remember the information long after they leave the event.

Oct 26, 2011
The Administration Slithers Away From Reality

Jul 27, 2011
Government by Coup de Theatre or the Constitution?

Apr 27, 2011
Only the Republican Study Committee Budget Gets the Job Done

Apr 20, 2011
Governing While Drunk on Partisanship

Apr 13, 2011
President's Call to Inaction To Be Withdrawn

Apr 06, 2011
Should President Be Worrying About Iraq, Not Libya?

Mar 09, 2011
Is the President Really in Good Shape for Re-Election?

Feb 02, 2011
Support Mubarak: Down the Revolution, Up Orderly Progress!