Terry Paulson
|
Posted: Nov 11, 2016 12:01 AM
Share   Tweet
The opinions expressed by columnists are their own and do not necessarily represent the views of Townhall.com. 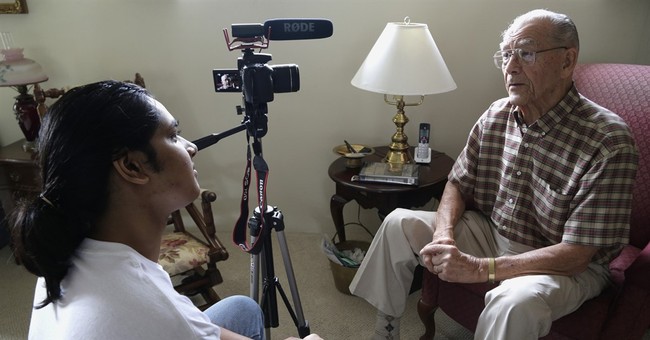 On this Veteran’s Day, I am reminded of a unique flight from Dallas to Minneapolis. There were over 60 returning soldiers from the Iraq War on their final leg home. Those fortunate enough to sit next to a young soldier had the opportunity to meet our country’s finest up close and personal.

As we landed, the flight attendant said, “These soldiers are home from serving us in Iraq. Let’s let them off first.” Such calls for order and compassion for fellow travelers often fall on deaf ears as soon as the arrival bell sounds, but not on this flight. Citizens stood aside and provided a standing ovation as the soldiers hurried off the plane. There were tears in our eyes; no doubt there were tears in their eyes as well. I was proud of our country that day.

In the 60’s when Lou Fiore, a young marine fresh from 13 months of service in Vietnam, stepped off his plane, no one applauded. No one said thank you. No one even acknowledged his presence.

Within weeks of his arrival in Vietnam, only 2 of the 13 men in his platoon remained alive. By mere attrition, he soon was promoted to platoon leader. The Viet Cong had developed an effective strategy; snipers would target the radio man, the machine gunner and the officer. Lou carried the machine gun, and later became sergeant. He was a marked man.

“I finally coped by accepting that I wasn’t going to make it out of this alive,” said Lou. “I figured that even if I did make it out, I wouldn’t be worth anything to anyone. I was coming back from hell and bringing a little bit of that hell with me. I stopped worrying about me. You didn’t get close to a lot of people because dealing with losing friends was hard. But you did get closer to the men in your platoon. As platoon leader, I found my mission. I focused on getting as many of my men back as possible.”

“I just took it a day at a time,” Lou continued. “My job was to survive today. I didn’t want to plan beyond that. I wanted to stay focused on the day. I didn’t even want to go back to the states or to R&R until my time was up. I had seen people come back from seeing loved ones in Hawaii. They often died because they had lost their edge. War requires focus—no time for recent memories of Hawaii and loved ones you miss”

“We could have won that war, but we lost it at home,” Lou said reflecting on another memory. “It bothered us that we weren’t supported by a lot of Americans. In fact, one time, behind an enemy bunker we found a cache of rice and medical supplies. In one box were Mickey Mouse T-shirts compliments of some peacenik from Stanford. They had sent the T-shirts in support of the enemy! I never forgot that.”

“They say there are no atheists in foxholes,” Lou said. “I’m not sure that is true, but I found my faith there. I didn’t know a lot about it, but I knew how to pray to God. Why? I knew I wasn’t in control. They were selfish prayers for protection for me and my men. I remember asking God, ‘Let me survive. Let me get back, and when I’m back, help me to find my way back into life.’ Each time I survived when I should have died, I came to feel that God had something else for me to do.”

“I haven’t felt fear since those days in Nam,” Lou confessed. “I think it has to do with realizing man doesn’t have much control in life; God does. I figure I’ll live as long as there is something I’m supposed to do. To tell you the truth, I think it’s my kids and grandkids. When I see them, I figure that is why I survived.”

“When I got home, no one applauded or thanked me, but Mary Ann gave me all the love I needed to find my way back. I’ve been growing closer to her and my God ever since. I just hope none of our soldiers coming back from serving our country ever have to experience what we did. They deserve that standing ovation you gave those soldiers on that plane.”

Lou’s story is but one story. Each veteran has their own. On Veterans Day, take time to listen to one soldier’s story and thank them for their service in securing freedom for you and for future generations. In fact, thank them every day you can.