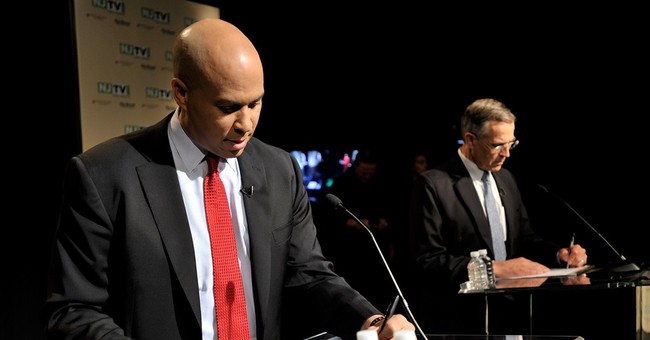 In the first Democratic primary debate Cory Booker deigned to participate in, he placed an unwise bet on his economic record in Newark. On every economic question, Booker responded with a confident "we did it in Newark!" But does his record in Newark qualify him for promotion to the United States Senate? The facts say no.

When Booker took office, 20 years of Sharpe James and his cronies running the city had unemployment at an unacceptably elevated 8.5 percent; after seven years of Cory Booker, it now stands at 14.4 percent. The number of unemployed Newarkers jumped over that period from 8,892 to 15,744 - a shocking 77 percent increase.

Booker points to big companies that have relocated to Newark, but almost all of them did so only because of hefty incentive packages at taxpayer expense. When he says "economic development," he really means "corporate welfare."

Who are the Booker corporate welfare queens?

Mimeo.com ripped off taxpayers for an $840,000 grant - even though its business plan required it to be near a major hub airport like Newark-Liberty.

Pitney-Bowes eased into Newark with a taxpayer-financed "Business Relocation and Economic Assistance" grant and a "Business Employment Incentive Program" grant.

Panasonic got a stunning $102.4 million from state taxpayers, plus a nifty local property tax abatement. An analysis by liberal think tank New Jersey Policy Priorities found Panasonic will create only 200 to 250 new jobs at a cost to taxpayer sin excess of $400,000 per job.

Prudential got even more -- $210.9 million from state taxpayers - to move a few blocks from its current Newark headquarters to a new tower.

The Wall Street Journal recently reported that 43 percent of state corporate welfare incentives under the so-called Urban Transit Hub program went to Newark, to the tune of $446 million.

"We would never have been able to advocate successfully without these measures," said Stefan Pryor, Booker's deputy mayor for economic development - i.e., his director of corporate welfare.

Meanwhile, for regular businesses not blessed by Booker's taxpayer-funded largesse, times are tough.

While Panasonic got its property tax abatement, small businesses around Newark were being shocked with massive appraisal increases from Appraisal Systems Inc., the company Booker outsourced property tax appraisals to.

"How can I pay the taxes?," Fernandes said.

Jose Breda, who owns a 6-unit apartment building whose valuation more than doubled was blunter: "They are robbing the people."

In 2010, Booker laid off 167 police officers (despite a 20 percent increase in property taxes) and triggered a spike in violent crime, which is up 24 percent from 2009 to 2012. There were two fatal shootings Friday in broad daylight, while Booker was on Twitter sharing quotes from Winnie the Pooh and mourning the death of an actor who played a Klingon on Star Trek. Outside of the city's corporate welfare-funded glitzy downtown, Newark's suffering is getting worse.

Meanwhile, Booker, owner of that shameful 14.4 percent Newark unemployment rate has - to be fair - created about 20 real private sector jobs. The jobs are at Waywire, a company he founded with investment cash from Oprah Winfrey and Lady Gaga's manager that has become best known for hosting anti-Semitic videos that YouTube won't allow. But the company Booker founded doesn't even have an office in New Jersey, let alone Newark. Waywire's offices are safely located in Manhattan.

Booker promises to do for America what he did in Newark. Voters should avoid making America more like Newark and look someplace else for their next United States Senator.