Joseph is perhaps best known for the role of Lt. Martin Kendall, Lisa Bonet’s husband, on the hit series The Cosby Show. He was also a three time NAACP Image Award Nominee for his portrayal of Attorney Justus Ward on the Daytime Drama General Hospital. For two seasons he appeared as Mayor Morgan Douglas on the CBS series The District, recurred as Marcus Johnson on the hit CBS series Without A Trace and most recently appeared as JT Morse on the Fox Series, Vanished. He has had guest starring roles on C.S.I., Las Vegas, Jack and Bobby, The King of Queens, Judging Amy, Family Law, Martin, The Larry Sanders Show, City of Angeles, Any Day Now, The Parkers, Popular, V.I.P. and Living Single among others.

His feature film credits include starring roles in Strictly Business, Let’s Talk About Sex and Midnight Blue. Phillips’ many theatrical credits include starring roles in the Broadway production of Six Degrees of Separation, the Kennedy Center and American Playhouse productions of A Raisin in the Sun, starring Danny Glover and Esther Rolle, and the off- Broadway production of Coriolanus with Christopher Walken and Irene Worth. Mr. Phillips also had the honor of creating the title role in Dreaming Emmett, Pulitzer and Nobel Prize winning author Toni Morrison’s only theatrical play. Joseph’s solo performance piece, Professor Lombooza Lomboo was a featured production at the 12th annual National Black Theatre Festival and the 2001 Minnesota Fringe Festival.

Acting and writing are just two of Joseph’s many passions. His interest in community service has led to Mr. Phillips involvement with the Special Olympics, The Green Chimneys Foundation, of which he was an advisory board member, The Red Cross and the Big Brothers of Greater Los Angeles. Phillips is an ambassador for the Sickle Cell Disease Association of America and is the face of Project Alpha for the March of Dimes.

Joseph is a member of the Screen Actors Guild, American Federation of Television and Radio Artists, Actors Equity Association, the Academy of Television Arts and Sciences, Alpha Phi Alpha Fraternity Incorporated, was National Co-Chair of the African American Steering committee for Bush/Cheney ’04, was named a member of the Republican National Committees African American Advisory Board, was appointed by Governor Arnold Schwarzenegger to the state board of directors of the California African American Museum and was named a 2005 Claremont Institute Lincoln Fellow.

An interest in Law resulted in Joseph’s acceptance to Rutgers University School of Law—an auxiliary career path he has put on hold. He is also a graduate of culinary school and has had recipes published in Soap Opera Digest, Essence Magazine and the best selling cookbook, Cooking with Regis And Kathy Lee, and is the Celebrity Chairman for Real Men Cook, Los Angeles.

However, his greatest passion is Nicole, his wife of 13 years, and their three children, Connor, 10, Ellis, 8 and 6 year-old Samuel.

The Failing Promise of Public Education
By Joseph C. Phillips
We, the American public, hold it as an article of faith that those responsible for devising and implementing public policy ...
November 22, 2010 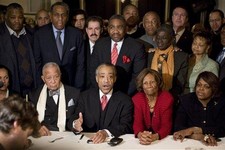 Sellouts at the NAACP
By Joseph C. Phillips
For decades the National Association for the Advancement of Colored People fought the good fight against racial discrimination. The ...
November 01, 2010

Fed-Up With the TSA
By Joseph C. Phillips
I arrived at the Los Angeles Airport more than an hour early. I had made good time on ...
October 25, 2010

Fed Up With the Transportation Safety Administration
By Joseph C. Phillips
I arrived at the Los Angeles Airport more than an hour early. I had made good time on the ...
October 25, 2010

Social Security Reform: The New Radicalism
By Joseph C. Phillips
There is, perhaps, no better testament to how far this nation has drifted from the principles of individual liberty, free ...
October 18, 2010

GOP, Don't Fool Us This Time
By Joseph C. Phillips
While listening to music on my I-phone, I began to contemplate the upcoming mid-term elections. The rock band, The ...
October 11, 2010

Humorless Muslims and Annoying Christians
By Joseph C. Phillips
I am curious to see what happens when President Obama invites Molly Norris to the White House for a beer. ...
October 04, 2010
The Absurdity of the Racialist Playbook
September 20, 2010 | 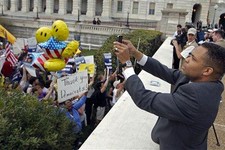 America: Still Talking About Race
By Joseph C. Phillips
According to the website CNN.com, some of the criticism of first lady Michelle Obama is driven by partisan politics. However, ...
August 23, 2010

Tolerance and the Ground Zero Mosque
By Joseph C. Phillips
I am fascinated that the same people who have been able to find a Constitutional right to government control of ...
August 16, 2010

Clarity and the New Black Panther Party
By Joseph C. Phillips
In its coverage of the Philadelphia voter intimidation case, conservative media has unfortunately chosen sensationalism over clarity. There ...
July 19, 2010

Who is John Locke?
By Joseph C. Phillips
I am willing to wager my house that not one of my son’s seventh-grade classmates could identify John Locke in ...
July 12, 2010

Independence and the Right to Private Property
By Joseph C. Phillips
The right to private property was one of the central issues involved in the American Revolution. The colonists’ ...
July 05, 2010

Assessing the True Cost of Liberty
By Joseph C. Phillips
My eldest son has decided that he wants to be a marine. His plan is to enter the Naval Academy ...
June 28, 2010
Commentary Archives
CARTOONS | Gary Varvel
View Cartoon