Autry J. Pruitt
|
Posted: Jun 06, 2016 1:50 PM
Share   Tweet
The opinions expressed by columnists are their own and do not necessarily represent the views of Townhall.com. 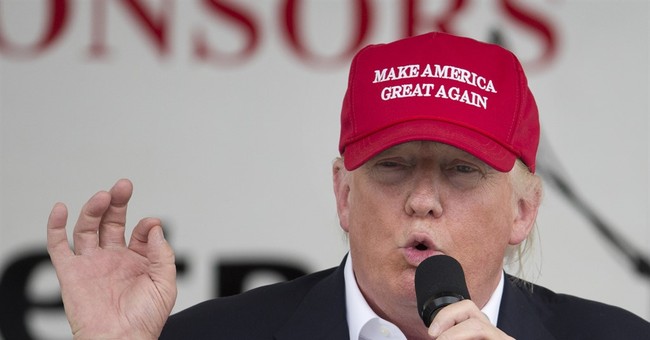 Donald Trump is taking fire from the left and the right for expressing his reservations over having a class action lawsuit against Trump University heard by U.S. District Judge Gonzalo Curiel. But Trump’s greatest sin is that he cribbed a tactic out of the Democrats' playbook by injecting ethnicity into an argument.

We like to think of the American judiciary as actually just; that justice really is blind and that any of us can and do receive a fair shake under our judicial system. But a glance at what the racial grievance industry has been peddling in recent years paints an entirely different picture.

Al Sharpton is among the loudest voices calling for more black police officers, cops being the first level of the criminal justice system. The rationale is designed to look straightforward - black police can do a better job policing black neighborhoods because they better understand the black experience - but it’s nothing more than a means of fomenting further racial animosity.

The underlying insinuation is that white cops don’t or can’t give blacks a fair shake, and that relatively isolated instances of actual racism justify a blanket indictment of every non-black cop on the beat. This coming from Sharpton who, on Monday morning, said Trump was wrong to inject race into a judicial matter.

We’ve seen plenty of the same racial pathology at the next level of the system; the courts. The retirement of Justice Thurgood Marshall from the U.S. Supreme Court gave rise to the “black seat” meme that liberal Democrats promote as a means of ensuring something other than a court that looked one way or another based on skin color.

Perhaps the most blatant example was Sonia Sotomayor’s ill conceived hope that, “A wise Latina woman with the richness of her experiences would more often than not reach a better conclusion than a white male,” which percolated to the surface during her 2009 U.S. Supreme Court confirmation process. In both cases, the message is clear: a white court cannot be trusted to dispense justice.

Which brings us back to Trump. His concern is that he cannot get a fair shake from Judge Curiel. We cannot look into the judge’s heart but we can look inside his head. Based on his affiliation with the San Diego La Raza Lawyers Association, it’s not unreasonable to presume Curiel shares the organization’s goals which are “specifically” delineated on the group’s website as working to, “Increase the overall number of Latinos in the legal profession; Encourage and support Latino and Latina judicial candidates to apply to the bench; Advocate for the promotion and retention of Latino and Latina attorneys and judicial officers.”

Again, we see the American judiciary dressed in the wardrobe of race and ethnicity. While this model has almost exclusively been a tool of the left, Trump has reversed the polarity of the argument. A judge who has lent his name and efforts to a group agitating for more Latino judges is hearing a case involving a person whose policies on immigration are unpopular with a lot of Latinos. Trump, believing this hurts his case, has co-opted the tactics of the left by bringing ethnicity into the discussion and thus, the current criticism must be destroyed.

As for the wisdom of such an argument by Trump, I wish he hadn’t done it and it is a large bell that cannot be un-rung. But it’s important to understand that if Trump is guilty of anything, it’s that he is using the same approach with Judge Curiel that liberals have used for decades in trying to formulate a judiciary that is somehow supposed to be ‘more just’ by using race as a litmus test for the bench.