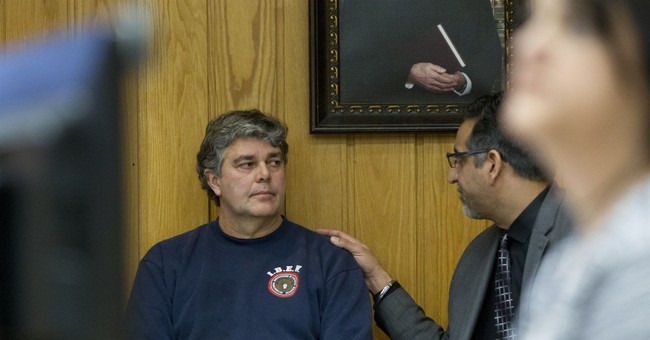 Leah reported earlier that, "Randall Margraves, the father of three girls who were abused by former Olympic team and Michigan State University doctor Larry Nassar, had to be restrained Friday as he rushed at the doctor during his latest sentencing hearing. Nassar is now accused of abusing more than 250 women and girls.

When that request was denied he asked for one minute and afterwards rushed at Nassar and had to be tackled to the ground by the bailiffs."

This afternoon, the court decided to not press charges nor levy any fines against Margraves.

"I can’t say I understand what it would be like to stand there as father and know that three of your girls were injured physically and emotionally by somebody sitting in the room," Judge Janice Cunningham said.

"I don’t disagree that as a parent and the victims that you want people held accountable. I don’t disagree with that. Use the legal system to do it. Use the system of justice that is here. And there will be the proper punishment. But as for the direct contempt of court there is no way this court is going to issue any type of punishment given the circumstances of this case," she said.

"I have the highest and utmost respect for the justice system. I’d like to apologize to everyone in the courtroom and all the officers, they are fine upstanding officers who had to deal with my outburst," Margraves told the Judge according to ABC News.

"I came here to support my daughters, I knew they were going to read a statement, I did not know what was in it, they would not let me see it ahead of time. I’ve got to hear that and have Larry Nassar shaking his head no, like it didn’t happen," he continued. "I lost control, I apologize 100 times."

At a press conference, the gymnasts' father apologized again but made the anger in his heart known in a statement.

"I feel very remorseful... this cannot be a lawless society, I know that. I lost control but I regained control later in a holding cell," Margraves told reporter his evening.

"I believe in God almighty. I believe in heaven and hell, and I can only hope that when the day comes that Larry Nassar has ended his days on this Earth that he will be escorted to one of the deepest, darkest, hottest pits in hell there is for him and people like him. I hope there's a lot of pain attached to it because he certainly left a lot of pain on this Earth," he added.

Prior to the judge's merciful sentencing, a GoFundMe page was created by a man named Aaron Pangborn to help with any undue legal burden and financial cost incurred by Margraves from his courtroom actions. However, since no legal expenses are necessary, Pangborn says he and the Margraves will find a worthy charity donate the money to help victims of sexual abuse. Pangborn left a note for supporters on the GoFundMe comment section, saying, "Wow, thank you all for your support. I initially started this GoFundMe campaign as way to help cover any legal and court costs that Randy may have after this mornings news. As we all know, Randy was not charged after the fact. I will work with him and his family to ensure the funds collected will go to a good cause to help victims of sexual abuse."

The GoFundMe has raised more than $17,000 in eight hours in support of the father.