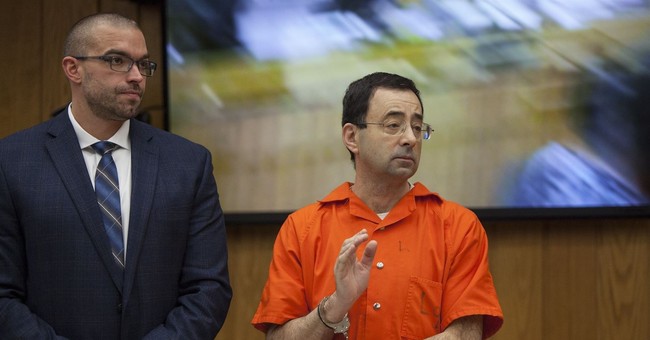 Randall Margraves, the father of three girls who were abused by former Olympic team and Michigan State University doctor Larry Nassar, had to be restrained Friday as he rushed at the doctor during his latest sentencing hearing. Nassar is now accused of abusing more than 250 women and girls.

When that request was denied he asked for one minute and afterwards rushed at Nassar and had to be tackled to the ground by the bailiffs.

Just prior to this, his daughter Lauren Margraves told the court in her testimony "last year and a half of my life has been a crazy whirlwind and there's no reason it should have been that way."

She said Nassar molested her when she was 13.

Two of his daughters gave statements to the court and they said a third sister had also been molested by Nassar.

Following the incident, Assistant Attorney General Angela Povilaitis told families in the courtroom to "use your words" and that violence "is not helping your children."

Nassar was sentenced in January to between 40 and 175 years in prison. He had pleaded guilty in Ingham County, Michigan, to seven counts of criminal sexual conduct and admitted to using his position as a doctor to molest girls under the guise of medical treatment.

Judge Janice Cunningham later said there's "no way" she'll punish the Margraves for the incident. He has apologized for charging at Nassar

The judge doesn't consider a punishment appropriate given Nassar's crimes and the families' anguish, but said that it's wrong to "combat assault with assault."