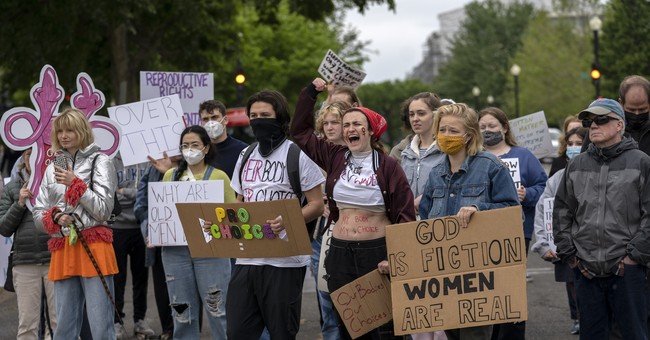 On Saturday, pro-abortion activists across the country to gather for various "Bans Off Our Bodies" protests in light of the U.S. Supreme Court looking to overturn Roe v. Wade, as evidenced by a draft opinion leaked earlier this month. With the mainstream media being so fond of the movement and sympathetic to the pro-abortion side, the protests received glowing coverage as well as trended on social media.

The following morning, the Sunday shows provided coverage as well. ABC's "This Week" not only referenced the protests, but had on pro-abortion and "devout Catholic" House Speaker Nancy Pelosi (D-CA) to discuss. Pelosi also mentioned the protests while on CNN's "State of the Union." And NBC's "Meet the Press" discussed the protests as well.

Coinciding with the "#BansOffOurBodies," trend, Twitter users were invited to check out "With fear and fury, thousands across U.S. rally for abortion rights," by The Washington Post. The outlet published many more pieces about the protests as well.

There was certainly "fury" all right, as there has been "rage," and other similar "call to arms," including from public figures and elected officials no less. That "call to arms" line came from Chicago Mayor Lori Lightfoot over Twitter last week, as Spencer highlighted. Mayor Lightfoot also referred to how Chicago will become a "safe haven" and an "oasis" for abortion in the Midwest.

Pro-abortion protesters have been harassing in nature when it comes to protesting at the homes of justices, and interrupting church services. They've even become violent, as they've firebombed and threatened pro-life organizations.

Democratic leaders and the White House have laughed it off or even said they "encourage." While the Biden administration did ensure further protection for Supreme Court justices on Thursday, it came after much pressure from Republicans.

A simple search of the "#BansOffOurBodies" trend on Twitter for Sunday morning brings up vulgar and even inciting signs and tweets.

The #BansOffOurBodies protests across the nation are an amazing thing to behold. Conservatives fucked around. They are about to find out.

Ok ladies you are winning so far for the best sign I have seen???????? #BansOffOurBody #BansOffOurBodies pic.twitter.com/g0D0wFOdPX

#BansOffOurBodies if you come after women, we have no choice to retaliate. Be warned Republicans & SCOTUS. pic.twitter.com/Z56J0faqe2

Julio tweeted footage of the protests, as did other conservative journalists, such as Mia Cathell, Mary Margaret Olohan, and Kendall Tietz.

This thread is insane. https://t.co/ZaxJxVvfKH

He started jumping along to their chants. pic.twitter.com/zZndj6mN9Y

There were also pro-life counter-protesters in attendance to make sure that their voices were heard. The pro-life news site LifeNews.com also highlighted a piece from National Right to Life News Today's Dave Andrusko reminding that women are more pro-life than men.

Rode up to the state capital to let them know:
we are the #prolifegeneration and we will see the end of Roe v Wade. pic.twitter.com/gPziGze5Xy

As Alex Christy highlighted for NewsBusters on the Saturday morning of the protests, the major media outlets were much more likely to hype and promote the pro-abortion protests, while pro-lifers were more of an afterthought.

NewsBusters has also year after year highlighted how the annual March for Life that has occurred every year to commemorate the anniversary of Roe v. Wade, is always dealt the short end of the stick when it comes to fair and equal coverage, or really any coverage at all. This was even the case in 2020, when then President Donald Trump became the first sitting president to make an appearance at the event.

While pro-abortion organizers might be energized by the marches, polling affirms that the pro-life side has the momentum when it comes to voter views and voter enthusiasm.