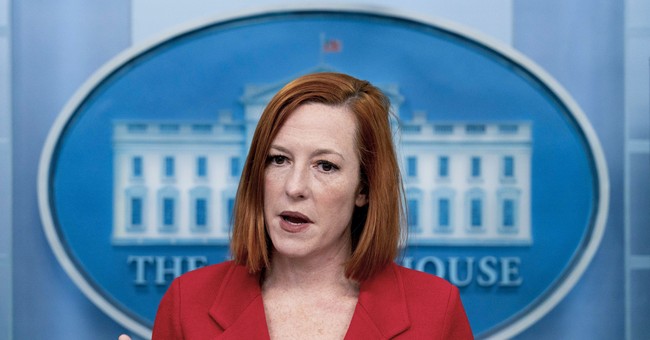 Thursday's White House press briefing started nearly four hours late, which began with White House Press Secretary Jen Psaki introducing her successor, Karine-Jean Pierre, who currently serves as the principal deputy press secretary. Questions to do with the leaked draft from the U.S. Supreme Court showing that the Court is prepared to overturn Roe v. Wade took center stage during the press briefing, including an exchange between Psaki and Fox News' Peter Doocy.

DOOCY: "These activists posted a map with the home addresses of the Supreme Court justices. Is that kind of thing this president wants...?"

PSAKI: "The reason people are protesting is because women across the country are worried about their fundamental rights." pic.twitter.com/TCpXCOwfQR

When Doocy asked if "the progressive activists planning protesters outside of justices' houses are extreme," Psaki's response was to emphasize that "peaceful protests are not extreme," and that "we encourage people to keep it peaceful and not resort to any level of violence."

Upon being confronted with how "these activists posted a map with the home addresses of the Supreme Court justices," Psaki instead focused on the "passion" of such activists. "Look, I think the president's view is that there's a lot of passion, a lot of fear, a lot of, uh, sadness from many, many people across this country about what they saw in that leaked document."

She went on to say "we obviously want people's privacy to be respected, we want people to protest peacefully if they want to protest, that is certainly what the president's view would be."

During her back-and-forth with Doocy, Psaki retorted that "I don't have an official U.S. government position on where people protest," and also made clear that the point was not about the safety and privacy of the justices.

"But I think we shouldn't lose the point here," Psaki insisted, as she became passionate in her tone. "The reason people are protesting is because women across the country are worried about their fundamental rights that have been law for 50 years, their rights to make choices about their own bodies and their own healthcare are at risk. That's why people are protesting! They're unhappy! They're scared!"

Doocy was referring to activists, who as Spencer and Julio have covered, are being paid to protest at the homes of Supreme Court justices. As I also highlighted earlier on Thursday, the safety of justices is of great concern, at a time when pro-abortion activists publicly call for "rage," and others are threatening or acting on threats of violence.

Psaki also refused to give an answer as to whether President Joe Biden supports any limits on abortion. Though some may be cagey, as Psaki is, the Democratic Party refuses to name any limit on abortion it supports, with Doocy naming Rep. Tim Ryan, the Democratic nominee for the open Ohio Senate seat as one such example of someone who is at least open about this radical position.

In a subsequent question soon after, Psaki doubled down on her refusal to condemn the leaked draft. "This is not about the leak, this is about women's healthcare," Psaki passionately called, again repeating how focusing on the leak is a "distraction."

REPORTER: "Why wouldn't the White House condemn this leak?"

PSAKI: "There is an effort to distract from what actual issue here...many Republicans who are trying to overturn a woman's fundamental rights try to make this about the leak. This is not about the leak." pic.twitter.com/bEL0Fop99Y

Throughout the press briefing, Psaki had a noticeably curt and even angry tone with reporters who pushed her to condemn pro-abortion activists.

Earlier on Thursday, Catholic Vote President Brian Burch released a statement calling on President Joe Biden to condemn these groups, "Ruth Sent Us," which are also threatening the safety of Catholic Churches and their parishioners during Mass.

"In the wake of the shameless leak of a draft opinion of the Supreme Court, pro-abortion groups are now threatening to disrupt Catholic churches and to protest outside the homes of Supreme Court justices this Sunday," Burch warned. "President Biden must immediately and forcibly condemn these domestic terrorist threats. Anti-Catholic zealots are plotting to intimidate and harass Catholics across the country, along with justices and their families. This country was built on freedom of speech and freedom of religion. The President of the United States must stand up for both."

Burch's statement also referenced the desecration of a Catholic church in Boulder, Colorado that was vandalized by pro-abortion activists.

"These threats follow a record number of attacks on Catholic churches, shrines, and symbols over the past two years. Just this week another Catholic church in Boulder, CO was desecrated by pro-abortion activists. We call on responsible leaders in Washington to unequivocally condemn these dangerous threats before they lead to violence, or worse," he said.

When a reporter tried to ask about such desecrations, Psaki snapped a reminder that the president supports "peaceful protests" and prevented him from finishing his sentence as she took another question.