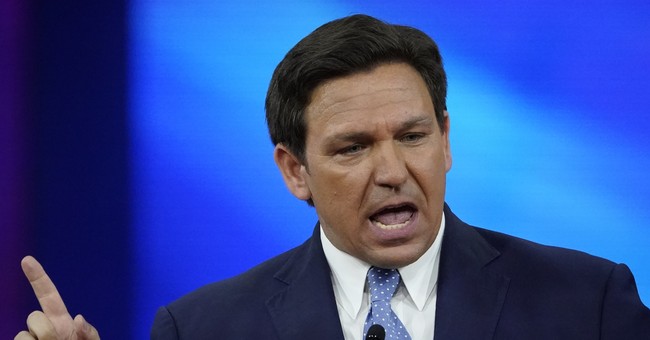 On Friday afternoon, Gov. Ron DeSantis (R-FL) signed a bill into law putting an end to Disney World's special tax status that allows the amusement park to govern autonomously, according to Kyle Morris with Fox News. The bill had passed the Florida State Senate and State House earlier this week, as Spencer reported.

"You’re a corporation based in Burbank, California, and you’re gonna marshal your economic might to attack the parents of my state. We view that as a provocation, and we’re going to fight back against that," DeSantis said.

Gov. DeSantis had brought up the proposal of getting rid of the districts after Disney spoke out against the parental rights in education bill that recently was signed into law. As Julio covered, the governor earlier this month had given a press conference where the idea came up.

"What I would say as a matter of first principle is I don’t support special privileges in law just because a company is powerful and they’ve been able to wield a lot of power," DeSantis had said.

Although the Walt Disney Company does not appear to have responded over Twitter yet to Friday's bill signing, the company did tweet about its opposition to the parental rights in education bill last month, before it was signed into law. CEO Bob Chapek had supposedly been facing criticism from his own employees for not speaking out against the legislation sooner.

Today, our CEO Bob Chapek sent an important message to Disney employees about our support for the LGBTQ+ community: https://t.co/l6jwsIgGHj pic.twitter.com/twxXNBhv2u

As has been recently exposed, though, the Walt Disney Company has been entrenched in wokeness for some time, with the company have an agenda to add "many, many, many LGBTQIA characters in our stories," as Disney corporate president Karey Burke is captured saying in video footage.

That Chapek has meddled into such political matters has led to speculation that he is in trouble and may even be gone soon.

The White House has also been actively speaking out against the parental rights in education bill, which they, and other critics, have dubbed the "Don't Say Gay" bill. White House Press Secretary Jen Psaki, as I highlighted on Thursday, has spoken out against various efforts from Florida to protect young children from being indoctrinated with subjects such as gender identity that are not age-appropriate in the classroom. Psaki was even in tears as she criticized Florida for protecting children from what the White House claims is "care" that is "life-saving" and "gender-affirming."

On Thursday, aboard Air Force One, White House Deputy Press Secretary Karine Jean-Pierre shared it is "our view that the “Don’t Say Gay” bill is really crystal clear: It’s wrong.  That’s our view: It is just wrong. We oppose the governor taking action against a company because of their opposition to that bill."

The movement of the legislation throughout this week had led to a collective freakout from the left and some mixed reactions on the right.

As Clay Travis, the founder of OutKick who is also a lawyer, highlighted though, Disney World is merely being treated the same as other theme parks also in Florida, such as SeaWorld and Universal Studios.

Florida is now treating Disney World the same as Sea World, Universal Studios and Legoland. Discussing Desantis vs Disney on @foxnews this AM: pic.twitter.com/33NN350Tzg

More steps could soon be taken against Disney World. As I covered earlier this month, Rep, Jim Banks (R-IN) wrote a letter to Chapek indicating that he would not support renewing Disney's copyright of Mickey Mouse when it expires on January 1, 2024.

In addition to the law ending Disney's special tax status, Gov. DeSantis on Friday signed the "Individual Freedom" measure, also known as the Stop WOKE Act, which prohibits Critical Race Theory (CRT) from being taught in classrooms and corporate settings.

Individual freedom is the fundamental truth that all individuals are equal before the law & have inalienable rights. Critical Race Theory threatens that foundational principle. With today’s bill signing, parents, students & employees exposed to CRT have the power to fight back. pic.twitter.com/pxkFc5qJqU