Biden Says GOP Is Having 'Mini Revolution.' Why Doesn't He Worry About His Own Party? 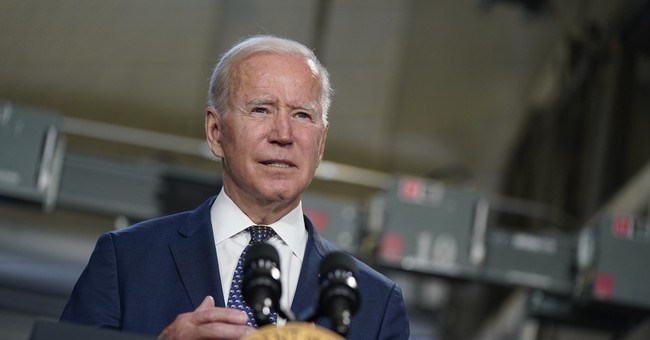 It was bound to happen that Democrats would get involved with Republican House leadership as it applies to Rep. Liz Cheney's role in chairing the House Republican Conference. While taking questions from reporters on Wednesday, President Joe Biden noted that, "I think the Republican Party is trying to identify what it stands for. And they're in the midst of a significant sort of mini revolution going on in the Republican Party." The president then went on to acknowledge his own party has "gone through periods where we've had internal fights and disagreements. I don't ever remember any like this." He also claimed, "I think the Republicans are further away from trying to figure out who they are and what they stand for than I thought they would be at this point."

Recall that during his first press event on March 25, President Biden wondered aloud, "I have no idea if there will be a Republican Party." So his takes really are something else, especially on this issue.

Why should it matter what a Democrat says on this? But it's more than just wondering "who cares?" The Democratic Party isn't doing perfectly either.

Speaker Nancy Pelosi (D-CA) and members of the squad are not fans of each other. The feud the speaker had with Rep. Alexandria Ocasio-Cortez (D-NY) actually found its way into Pelosi's book.

Speaking of AOC, President Biden is doing as well as he is with progressives like her because he's lurched as far to the left as he could.

In the Senate, Majority Leader Chuck Schumer (D-NY) has to deal with Sens. Joe Manchin (D-WV) and Kyrsten Sinema (D-AZ) because they have repeatedly committed to not getting rid of the filibuster.

What does the Democratic Party stand for, then? Legislative priorities include doing away with federalism in the name of voting rights, upending religious freedom in the name of equality, getting rid of the filibuster, and packing the U.S. Supreme Court. Their proposals are not as popular as they'd like people to believe, though.

Sens. Manchin and Sinema are on the side of their constituents when it comes to their support for the filibuster.

A majority of Democrats are against court packing as well.

Though the Democrats being in line with one another as a party may help for party unity, and it's not as unified as President Biden claims or pretends it to be, they're not in line with the American people.

It can't be said enough that President Biden and the Democrats do not have a mandate. Yes, one party controls the White House and both chambers in Congress, but Democrats have a single-digit majority in both the House and the Senate. Unless 2022 is completely different from historical precedent, save for when Republicans kept control of the House in 2002, Republicans are about to retake their majorities. Perhaps Joe Biden should be more focused on that.