We're One Step Closer to Paying for Abortions with Our Tax Dollars, Thanks to Democrats 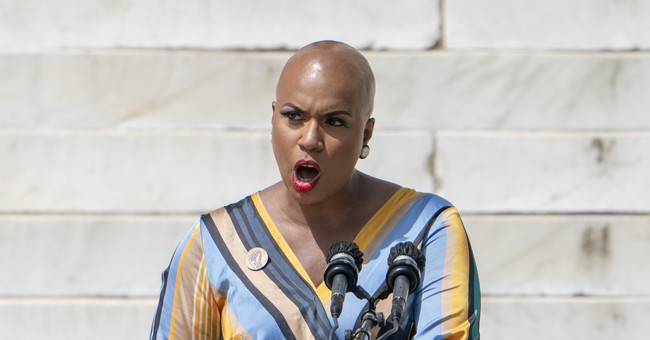 While Americans have been protected from paying for elective abortions with their federal tax dollars since 1976, that decades-old reprieve could soon be coming to an end. Democrats in Congress on Thursday reintroduced legislation to end the Hyde Amendment with the Equal Access to Abortion Coverage in Health Insurance Act of 2021, also known as the EACH Act for short. Part of the bill reads that "A person’s income level, wealth, or type of insurance should not prevent them from having access to a full range of pregnancy-related health care, including abortion services."

The Hyde Amendment is an anti-choice & blatantly racist policy designed to restrict health care for low-income communities & people of color.

Today, I reintroduced my bill to finally repeal this discriminatory amendment once and for all. It’s time to #BeBoldEndHyde

Just because abortion is legal in this country, doesn’t mean it’s accessible.

Today, we're introducing the EACH Act to repeal the Hyde Amendment and make abortion care accessible for everyone.

Watch today’s virtual rally to kick off our efforts to #EndHyde! https://t.co/ssnbSbvQED

Rep. Pressley has arguably been the most vocal about her charges of racism. Her statement in part read, with added emphasis, that "Reproductive justice has always been a racial and economic justice issue, and we must hold our ground and stand in our power... The EACH Act is necessary legislation that meets the moment by repealing the racist and discriminatory Hyde Amendment—which disproportionately impacts Black and brown people..."

In the Senate, the bill was introduced by Democratic Sens. Tammy Duckworth (IL), Mazie Hirono (HI), and Patty Murray (WA).

More than one of the lawmakers referenced the Supreme Court. Sen. Duckworth's statement in part offered that, with original emphasis, "The Supreme Court has repeatedly affirmed a person’s constitutional right to make their own reproductive decisions, making clear that the government has no place getting in between individuals and their doctors... The Supreme Court didn’t protect these rights only for the wealthy few, and they didn’t say only for those who live in certain states." With all due respect, the senator is engaging in selective history.

The Supreme Court actually ruled in favor of the constitutionality of the original Hyde Amendment language, which did not contain exceptions, in not one, but two cases, which were handed down the same day in 1980.

The Court in Harris v. McRae, as summarized by Oyez, "held that states participating in the Medicaid program were not obligated to fund medically necessary abortions under Title XIX. The Court found that a woman's freedom of choice did not carry with it 'a constitutional entitlement to the financial resources to avail herself of the full range of protected choices.'"

In Williams v. Zbaraz, the Court, as once more summarized by Oyez, "also held that a state is not obligated to pay for abortions through Medicaid when there will be no federal reimbursement because of the restrictions of the Hyde Amendment," as part of its multi-faceted decision.

On Wednesday, right before the legislation was introduced, sponsors of the EACH Act appeared on a call with reporters. Ms. Magazine, which was excited enough about the legislation to publish at least two articles, quoted Rep. Lee as saying, "Let’s call this Amendment what it is: It’s anti-choice and it’s blatantly racist." HuffPo ran with that statement as their headline in their own piece.

The bill's sponsors and supporters cry racism when it comes to how poor women and women of color cannot pay out of pocket for abortions. Lost on them though is how much more racist it is that the solution for a woman who uses Medicaid health care is to have an abortion. Lost on the bills' sponsors also seem to be that black babies are aborted at such a high rate, that in some parts of the country, more black babies are aborted than born. While black women make up about 13 percent of women in America, they account for 38 percent of abortions, more than any other demographic.

To be sure, the unintended but very much present racist regard for minority and lower-income preborn children and their mothers vulnerable enough to choose abortion is a large concern with such legislation. It also ignores the taxpayer who would be funding this elective procedure.

Only Sen. Duckworth acknowledges this, well, sort of, if you can consider her statement doing so enough. She claimed, with added emphasis, "This isn’t about what side you’re on in the abortion debate, it’s about equality and opportunity plain and simple," Duckworth said during a call with reporters Wednesday, as HuffPo reported. "Whatever you think about the procedure, we should all agree that what’s legal for wealthy Americans should not be so inaccessible for Americans of color and low-income Americans." She acknowledges pro-life concerns, but she dismisses them without care. What a slap in the face to not consider the financial or moral ramifications.

Pro-abortion news outlets, as well as Sen. Duckworth's press release, reference a poll from 2019 claiming that 62 percent of Americans support repealing the Hyde Amendment. It's a load of bull.

Firstly, the poll was commissioned by All* Above All, a vocal sponsor of the legislation, which Rep. Pressley thanks in her statement. The organization though was literally formed to oppose the Hyde Amendment, as evidenced by how they were "launched in 2013 as a women of color-led effort to restore and sustain public insurance coverage of abortion."

If that doesn't make you hesitant enough, consider how the poll questions were offered to respondents in order to encourage them to be opposed to what Hyde stands for. While the poll does reference "Medicaid coverage" throughout the questions provided in the results available for download, only once do the provided questions inform respondents that "taxpayer dollars" are involved.

The poll also asks respondents to choose between two options. The first option, which enjoyed 63 percent, read, "However we feel about abortion, politicians should not be allowed to deny insurance coverage for it just because a person is struggling financially." Notice how the question does not even explicitly tie-in abortion with "insurance coverage," and certainly not taxpayer dollars. The second option read, "Using taxpayer dollars for abortions forces all of us to pay for them–even those of us who do not believe in abortion," and had 37 percent support. Notice, then, that respondents were not able to choose an option such as "unsure" or "undecided," even when the options are so radically different from each other, with loaded phrasing.

Granted, some polls showing the exact opposite include ones that are commissioned by pro-life organizations, but it's nevertheless worthwhile to consider how questions for respondents are phrased. In the Knights of Columbus/Marist poll from this year, respondents are directly asked, "Please tell me if you strongly support, support, oppose, or strongly oppose using tax dollars to pay for a woman’s abortion." Fifty-eight percent of overall respondents oppose or strongly oppose.

In a 2019 article from Slate, a particularly pro-abortion outlet, William Saleton wrote that "Abortion Funding Isn’t As Popular As Democrats Think." In a 2019 Politico/Morning Consult poll, a plurality of voters, at 29 percent "strongly support" Hyde when asked if "you support or oppose banning federal funding for abortion except in cases of" rape, incest, or life of the mother. Twenty percent "somewhat support" this statement. In contrast, 32 percent "strongly oppose" or "somewhat oppose" and 19 percent "Don’t know / No opinion."  In a PRRI poll from 2019, a plurality of 48 percent say they oppose "government health insurance programs, like Medicaid, for low-income women covering abortion services."

Gone are the days when the Democratic Party wants abortion to be "safe, legal, and rare." Abortion must be legal throughout all nine months of pregnancy, for any reason, paid for with taxpayer dollars. The Democratic Party Platform opposes Hyde, and President Joe Biden signaled he no longer supported Hyde while running in the Democratic Party. On June 5, 2019, Biden's campaign claimed he still supported protecting taxpayers, as he had done for his entire career in politics. A day later, a statement from his campaign clarified that this was no longer the case.

That being said, in the first press conference following President Biden taking office, Press Secretary Jen Psaki was asked about the Hyde Amendment. Her answer mostly included how "I will take the opportunity to remind all of you that he is a devout Catholic, is somebody who attends church regularly..."

That non-answer could mean that President Biden had changed his tune, not just on the taxpayer-funded abortion, but on the abortion issue overall. Worse though, is how that answer may even claim to suggest that the Catholic Church had changed its teaching on abortion, since Biden is a "devout" Catholic, which couldn't be further from the truth.

Either Pres. Biden is about to be a very pro-Life President or Jen Psaki (and basically everyone else) needs to stop referring to him as a "devout Catholic"...! pic.twitter.com/Tvy9qVvUnW

That answer was relevant for all but a hot second, since less than a month later, Psaki told a reporter that President Biden's "view on the Hyde Amendment is well known..." No, not really, but keep telling yourself that, Psaki.

Psaki repeatedly refuses to directly address @owentjensen's question: "Can this administration right now guarantee, if the American Rescue Plan is passed, that no taxpayer dollars will go to the abortion industry?" pic.twitter.com/jT7ah9E42S

Fortunately, there are some Democrats who aren't ready to cave into forcing taxpayers to pay for abortions, including Sens. Bob Casey (PA), Kim Kaine (VA), and Joe Manchin (WV).

Well, they haven't caved yet, at least.