Here's What Else Democrats Want to Make You Fund: International Abortions 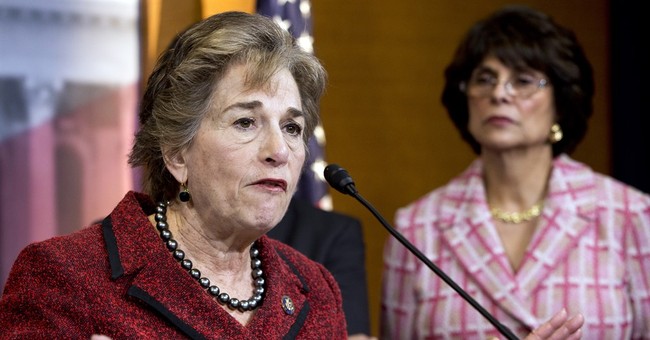 When you think of International Women's Day, do you think of that as an excuse to celebrate taxpayer funded abortions abroad? Democrats do.

The legislation in question would repeal the 1973 Helms Amendment, which prohibits taxpayer funds from paying for abortions abroad.

The bill's name sums accurately sums up a Democratic talking point: 'Abortion is health care, health care is a human right, and it must be paid for,' even abroad.

When introduced, the bill received attention in the form of supportive tweets.

It’s time to rescind this dangerous policy — for good. That is why I am a reintroducing the Abortion is Health Care Everywhere Act #RepealHelms https://t.co/JrH4ekiebx

It’s time to rescind this dangerous policy — for good. That is why I am a reintroducing the Abortion is Health Care Everywhere Act #RepealHelms https://t.co/JrH4ekiebx

The legislation was also hailed from media coverage with

That last piece predictably trashes President Trump, exploits the pandemic, and has this charming hot take to share:

Everyone — including people living in low-to-middle income countries — deserves the safety and dignity of basic health care, including comprehensive reproductive health care. That means more access to preventative screenings like Pap smears, testing and care for sexually transmitted infections and HIV/AIDS, and safe abortion and contraception, all with self-determination and respect.

A common them to such coverage is that opposing taxpayer funded abortions is racist. As if seeking to end the lives of these targeted populations somehow isn't worse:

Created by the late Sen. Jesse Helms, the Helms Amendment is nothing more than an attempt to control Black and Brown people all over the world by making it impossible for millions to access abortion. In addition to worsening health outcomes globally, keeping the Helms Amendment in place upholds his legacy of discrimination.

If these charges of racist intentions sound familiar, it's because a Biden nominee made news for just that. Speaking of the Hyde Amendment, which bans taxpayer dollars from funding elective abortions at home, the nominee to be Deputy of the OMB, Shalanda Young, said repealing it is "a matter of economic and racial justice because it most significantly impacts Medicaid recipients, who are low-income and more likely to be women of color.”

The Hill op-ed also acknowledges that "The U.S. government is the No. 1 funder of health care around the world and helps clinics in low- to middle-income countries provide essential services to their communities," which is even more consequential when the bill aims to "permanently repeal" the Helms Amendment.

Pro-lifers took notice of possible ramifications as well. Breitbart News included comments from Kristan Hawkins, president of Students for Life of America, in their reporting. "Abortion harms women as it ends preborn life and represents an offensive export to other nations, something the Helms Amendment helped prevent."

She also added that "America should be investing in life-affirming opportunity and true health care, not abortion, which represents a message of defeat and the implication that we want fewer people around the world to be born."

The bill was previously introduced on July 29, 2020, the first time legislation had ever been introduced to repeal the Helms Act. Now that Biden is in office, with Democrats controlling both the Senate and U.S. House of Representatives, the bill may actually become law, even though taxpayer funding going towards abortion, especially abroad, is so unpopular.

A Marist/Knights of Columbus poll from January found that 77 percent of respondents, including Democrats and those who self-identify as pro-choice, oppose or strongly oppose "using tax dollars to support abortion in other countries."

While the Democratic Party has been hellbent on strong-arming Americans into supporting and even funding abortion, they haven't been very upfront about it. You can't question or fight back against what you don't know.