With These Figures, It's No Shock Why Republicans Got Swept by Democrats in Georgia 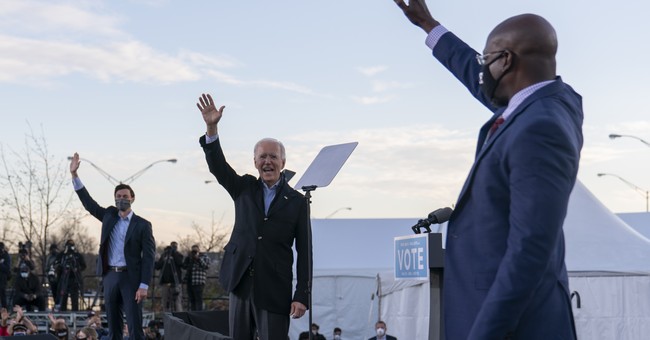 After all the vote totals were analyzed, it’s no shock why Democrats swept the GOP in the Georgia runoffs. Comparing Election Day 2020 to the January 5, 2021 runoffs, there was a massive dip in Republican voter turnout. Some 500,000 Georgia voters decided to stay home with Republican districts seeing the bigger declines in turnout. Jon Ossoff beat Republican incumbent Sen. David Perdue by 55, 354 votes. Raphael Warnock booted Kelly Loeffler by 93,659 votes. Loeffler was appointed by Gov. David Kemp to fill the remainder of Sen. Johnny Isakson’s term, who retired in 2019 over health reasons (via WaPo):

With control of the Senate at stake, following unprecedented campaign spending and with both President Trump and President-elect Joe Biden rallying for support, fewer people voted across the state. Runoffs often draw fewer voters, and this time the drop from the November general election amounted to about one voter in eight.

But turnout in Republican strongholds dropped by more. And differences across the state highlight the key role of black voters who powered the sweep.

Across conservative North Georgia, the state region where only about seven percent of people are Black, Republican David Perdue, whose Senate term expired Sunday, won by 48 percentage points, the same as in November. But it was a weaker showing in votes because turnout dropped, by more than any other region the state.

In both Senate races, Republicans performed well across most of the state. In the large majority of Georgia counties that were won by President Trump in November, Republican Senate candidates won Tuesday by an average of just under 40 percentage points. But those counties include many with relatively few voters. And across the Trump counties, the turnout drop was a few percentage points steeper than in counties won in November by Biden.

GOP lost these races by 55k and 93k votes respectively. Pretty easy to determine who owns the suppression of turnout https://t.co/0dtutktE4p

Due to the lack of GOP turnout, Georgia has two Democratic senators. Sorry, twohorribleDemocratic senators. One wholly owned by China, allegedly, and another with a whole host of issues. Our own Reagan McCarthy ventured down to the Peach State multiple times to cover the situation on the ground. The election in its closing days hit numerous roadblocks. For starters, Perdue couldn’t do final get-out-the-vote events due to one of his staffers testing positive for COVID a week from Election Day. He had to quarantine. Second, Mitch McConnell decided to gum up the works for $2,000 COVID relief checks, which had majority support. After months of grueling economic pain due to the lockdown regime, Congress decided to derail a relief bill because the checks…were too big. At the same time, President Trump shoulders some of the blame for going after Georgia Republicans more than the Democrats. The lingering allegations of voter fraud, some legitimate some not so much, cast further doubts on Republican voters who did not trust the system. The 2020 presidential race was stolen, so why should they participate in the Senate runoffs was the mindset here.

It all had a cumulative effect—and it ended up being disastrous. If these people had turned out, a GOP firewall would have been erected against the most radical of the Biden agenda action items. Now, our only hope of keeping a legislative filibuster isn’t even in Republican hands. All eyes are now upon Sen. Joe Manchin (D-WV), who has said he’s against both nuking the filibuster in its entirety and packing the court. We’ll see if he can handle the pressure. Sen. Krysten Sinema (D-AZ) could be another wild card as she’s fiercely independent and has more than one occasion told Chuck Schumer to screw off on some votes.

That’s what’s going on up on the Hill. In Georgia, the local Republican Party needs an overhaul. They need to reconnect and reboot. The 2020 election and these runoffs were winnable races. Democrats didn’t bulldoze their way through, but won through the turnout game, maximizing the Democratic bastions in the Atlanta suburbs. Stacey Abrams got her revenge for sure—but nothing is ever permanent. The GOP has an opportunity to boot Warnock who has to run again in 2022, but they need to get moving now.

In 2008, Obama was elected with increased Democratic majorities in the House and Senate. Democrats had 60 seats in the Senate. That got wiped away in the 2010 midterms after Obamacare. Just putting it out there; nothing is permanent in American elections.