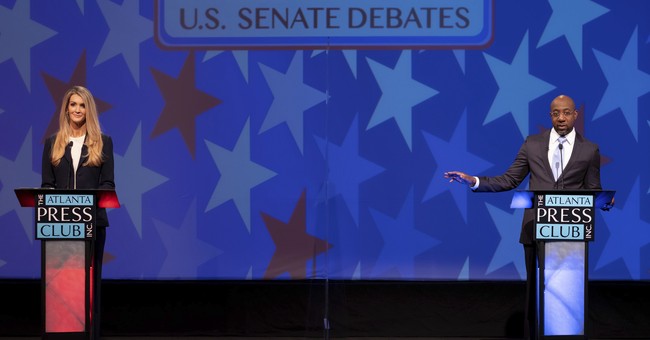 With just one week until Georgia’s pair of runoff elections that will decide control of the Senate, Democrat candidate Raphael Warnock is facing even more troubling abuse allegations. Warnock was arrested in 2002 on claims of obstruction of a child sexual abuse investigation, while working at a church camp in Baltimore; the police report characterized his behavior as “uncooperative and disruptive.” A lawsuit was brought forth, but was eventually settled. One alleged victim from the camp partially run by Warnock is now speaking out, corroborating abusive situations that occurred at the time; Anthony Washington, who was 12 years-old while attending the camp, detailed abuse occurrences and said that Warnock has no place seeking a seat in the United States Senate after “running a camp like that.”

GOP Senator Kelly Loeffler, whom Warnock hopes to unseat on January 5, has called for transparency from her opponent. She deemed the developing allegations “potentially disqualifying.”

The Georgia Republican pointed to complacency from mainstream media outlets that have given Warnock a pass from answering questions about his involvement with child abuse, among other troubling aspects of his past.

“This is a pattern of mainstream media refusing to ask tough questions to the Democrat candidates in my race. ‘Radical liberal’ Raphael Warnock has gotten a pass time and again from the mainstream media,” Loeffler said, pointing to his praise of Fidel Castro, unclear stance on court packing, vile comments about the military, and refusal to denounce Marxism and Socialism. She added that Georgians “need to understand how radical Raphael Warnock is, in his own words.”

Warnock’s history with abuse situations reaches further than the child abuse involvement. Recently uncovered police body cam footage shows his now-ex wife detailing a domestic dispute situation, which Warnock has also declined to address with voters. His now-ex wife called him a “great actor” who “only cares about his reputation.”

“This is actual footage, these are actual statements. There’s not even a question as to ‘did it happen' ... it’s on video. The victim’s words are there, and this is very, very serious. I can’t think of more serious things than domestic abuse or child abuse,” Loeffler said. “He’s [Warnock] someone who needs to answer for his past, for his own words, for his actions.”

Warnock has denied wrongdoing in both the child abuse investigation and domestic dispute with his now-ex wife. Members of his own party who previously claimed to champion victims of abuse have raised no concern about these allegations and his refusal to address his involvement.

Loeffler and Warnock will face off on January 5 in one of two runoff elections that will ultimately decide which party controls power in the Senate.