Katie Couric, Are You Kidding With That Remark About Fake News? 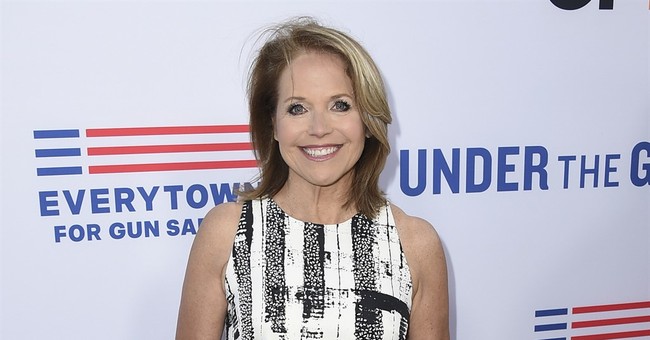 Fresh off of a judge’s ruling, which tossed a lawsuit against her for deceptively editing an interview with gun owners, Katie Couric says the thing that’s tearing America to pieces is…fake news. Yes, the woman who last year interviewed members of the Virginia Citizens Defense League, a state-based gun rights group, and cut out their answers to her question about background checks for her anti-gun documentary to make them look like morons, is worried about fake news. Is this a joke? If not - it’s an appalling lack of self-awareness (via NY Daily News) [emphasis mine]:

Katie Couric has (almost) seen it all.

Still, little has prepared the world-famous journalist for the phenomenon she says is currently “tearing [America] apart at the seams”: fake news.

“I remember I got sent a lot of stories from friends who were quite educated and were like, ‘Did you see this?’” Couric tells the Daily News. “And I would say, ‘Come on, you're kidding, right? This is BS.’”

“We're not doing enough of a good job of breaking down complicated issues and helping people really understand them,” Couric admits.

And until Americans can agree upon some shared sense of reality, they will continue to be manipulated by distributors of fake news.

“[Americans] are so divided that it's hard for us to come up with solutions and find commonalities,” Couric says. “And there's vitriol spewed by both sides at people who disagree with them.”

Uh, it’s sort of hard to reach that “sense of reality” when you deliberately edit footage. Her documentary Under The Gun reached out to the VCDL, a great pro-Second Amendment Group to get their input. This was obviously an attempt to make the documentary appear even-keeled. The question Couric asked was, “if there are no background checks for gun purchasers, how do you prevent felons, or terrorists, from walking into a licensed gun dealer and purchasing a gun?” Eight seconds of silence followed, even though the group responded immediately. Director Stephanie Soechtig said it was for dramatic effect.

“My intention was to provide a pause for the viewer to have a moment to consider this important question before presenting the facts on Americans’ opinions on background checks. I never intended to make anyone look bad and I apologize if anyone felt that way,” she said.

Well, at the time, Erik Wemple of The Washington Post wasn’t buying it:

The artistic “pause” provides the viewer not a “moment to consider this important question”; it provides viewers a moment to lower their estimation of gun owners. That’s it. As far as the rest of the statement, adults in 2016 may no longer write the phrase “apologize if anyone felt that way” and preserve their standing as professionals. To compound matters, here’s the accompanying statement from Couric:

“I support Stephanie’s statement and am very proud of the film.”

Many of those who sampled the discrepancy between the video and the audiotape were already enraged by the depiction of these gun owners. The statements from Soechtig and Couric will surely intensify the backlash, as well they should. An apology, retraction, re-editing, whatever it is that filmmakers do to make amends — all of it needs to happen here.

It wasn’t just conservative media that was up in arms about these deceptive edits, National Public Radio and even CNN voiced their outrage over the incident. NPR said, “This manipulation — and that's what it was — would not pass muster at NPR under its principles for fairness in handling interviews.”

Absolutely not, Brian—if I vented the contempt I have for that kind of dishonesty in the documentary format, I think I’d drop over right now from a stroke. It’s outrageous in that—what you called a BS explanation—absolutely. That was so bad, I couldn’t believe it. We wanted to listen to her [Couric], to pause to think about it, please. And the lie upon lie! Dishonest documentary makers are one of the lowest forms of life in media. No defense.”

Couric was forced to acknowledge the edits on the film’s website, while the VCDL filed a lawsuit against her. A lawsuit that was dismissed, but they’re appealing it. Should we be shocked this happened? No, Couric has a long history of anti-Second Amendment bias. Soechtig is unapologetic about the edits.

Fake news?  Katie Couric should know; she’s dabbled in it. The unexpurgated audio, along with what was depicted in the film, is featured below.