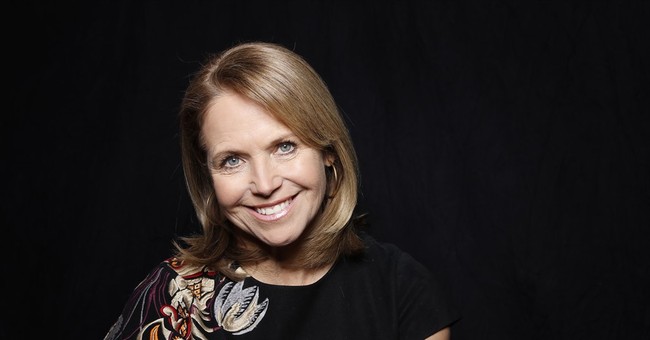 Let’s go back in time to when it was discovered that Katie Couric and Stephanie Soechtig made a documentary about gun violence in America and decided to nab an interview with the Virginia Citizens Defense League. It was done to get the other side, but ended up being a classic case of bias that no one could really defend…unless you're Soechtig.

In the interview with the VCDL, Couric and her team deliberately edited the portion where she asks them about background checks, which was met with silence from the group’s members, in order to make gun owners look ignorant and dim-witted. In fact, the unexpurgated cut of the interview shows the members of the VCDL giving detailed responses as to why more background checks wouldn’t work.

Now, the VCDL is filing a $12 million lawsuit against Couric and Soechtig for their deception. Bob Owens over at Bearing Arms had the scoop:

Second Amendment rights advocacy organization the Virginia Citizens Defense League (VCDL), along with two of its members, today filed a $12 million defamation lawsuit against Katie Couric, director Stephanie Soechtig, Atlas Films, and Studio 3 Partners LLC d/b/a Epix for false and defamatory footage featured in the 2016 documentary film Under the Gun. The film portrays a fictional exchange in which members of the VCDL appear silent, stumped, and avoiding eye contact for nearly nine seconds after Katie Couric asks a question about background checks. An unedited audio recording of the interview reveals that—contrary to the portrayal in the film—the VCDL members had immediately begun responding to Couric’s question.

In the filing, the VCDL, Daniel L. Hawes, Esq., and Patricia Webb allege that the filmmakers knowingly and maliciously manufactured the fictional exchange by splicing in footage that the filmmakers took surreptitiously after telling the interviewees to be silent for ten seconds so that recording equipment could be calibrated. The filing also contains side-by-side screenshots of the film’s footage of the VCDL members and anti-gun advocates, alleging that the filmmakers manipulated lighting to cast shadows on the VCDL members and to make them appear sinister and untrustworthy. “We were horrified to see how Couric and her team manipulated us and the video footage to make us look like fools who didn’t stand up for the Second Amendment,” said Mr. Philip Van Cleave, President of the VCDL. “We want to set the record straight and hold them accountable for what they’ve done. You shouldn’t intentionally misrepresent someone’s views just because you disagree with them.”

Oh, and let’s not forget that Couric’s crew might have violated federal firearms laws during the production of this eloquent piece of anti-gun propaganda. The former Today Show host has a history of anti-Second Amendment bias, so the editing shouldn’t be shocking sadly. Besides The Washington Post, CNN, and even NPR, called out the film’s manipulative editing, noting that it wouldn’t pass their standards. Couric and company screwed up big but good on VCDL for recording the audio of their interview as an insurance policy.

Couric did apologize for the edits, but the damage was already done.